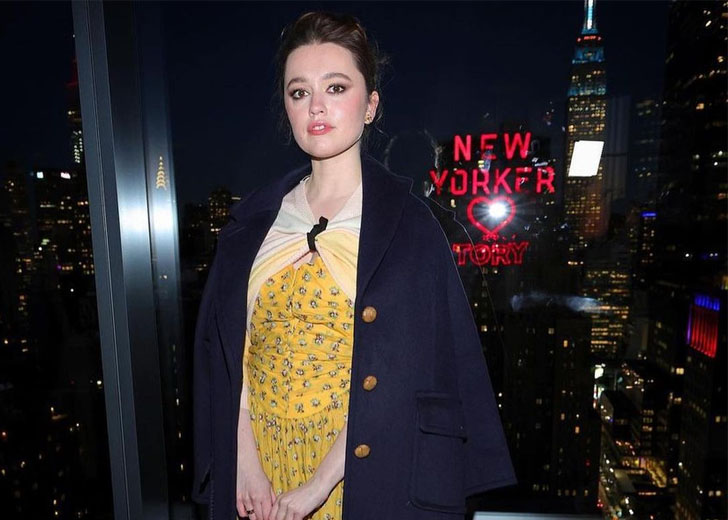 Aimee Lou Wood made her television debut when she played the recurring role of Aimee Gibbs in the Netflix series Sex Education. For her performance, she won a BAFTA TV Award for Female Performance in a Comedy Programme in 2021 and was again nominated for the same award in 2022.

The English actress’ career in the entertainment industry is short, but she has already won the hearts of many. She made her acting debut in 2017 and has since appeared in movies and TV shows like Uncle Vanya, The Electrical Life of Louis Wain, Chatterbox, On the Edge, Living, and Lilith & Eve.

Since her rise to fame, Wood has caught the attention of thousands worldwide, and her popularity has led many to be invested in learning more about her. One of the things that people want to learn more about her is her personal life.

The Stockport native actress doesn’t appear to be romantically involved as of this writing. There are no reports of her present relationship status, and she hasn’t given any hint about having a boyfriend through her social media handles.

To conclude, it seems like Wood is pretty focused on her acting career. Another thing she is focused on is her relationship with herself, a topic she discussed during her interview with Garzia Daily in September 2021. She said, “I find it hard when I’m in relationships to maintain my sense of who I am.”

She continued, “I’m very independent, but I’m also quite impressionable. I can be taken away from myself quite easily. I kind of start betraying myself and compromising my integrity to keep someone else happy. That’s why it’s really important for me to have time alone.”

And while she might be single, she has some tips to share regarding dating. During her July 2021 interview with Bustle, the actress talked about many things related to dating and offered tips for those looking for a post-pandemic relationship.

Speaking about dating, she said, “Dating can be such an odd thing, it’s a lot of pressure. But I normally know within five minutes if I’m going to get on with someone. I really believe in intuition. I also think I’m a bit of a witch. I love star signs and tarot. So, I don’t know if it’s intuition or me thinking I’m psychic.”

“I think we all have a knowing inside us. I love to give my friends help and support but I also want to empower them that they already know. Everyone has that intuition but it’s hard to listen to.”

In the end, Wood gave some tips for a post-pandemic relationship, which were, “Spend some typing hyping yourself up,” “Let them see the real you,” “Date how you want to,” and “COVID-19 clarifications.”

Why did Aimee Lou Wood break up with Connor Swindell?

Before Wood’s relationship status became single, she was in a relationship with her Sex Education co-star and brief on-screen lover, Connor Swindells.

The young actors naturally became friends while working together on Sex Education’s first season in 2018, where they played a couple. Their frequent social media posts about one another were a pretty big hint they were more than pals, even though they didn’t acknowledge their relationship.

Several months after Sex Education aired on Netflix, Wood seemingly confirmed her romance with Swindell when she posted an emotional Instagram post on Swindell’s birthday on September 19, 2018. The pictures she shared revealed that they were more than friends; however, the confirmation was yet to come.

Finally, in February 2019, Swindell confirmed to The Telegraph that he and Wood were dating. The confirmation came weeks after Sex Education season 2 got released. In the same interview, he said, “There is no confusion to be had between our sex scenes on the show and our own personal life.”

As time passed, people saw more of the cute couple, and many thought this bond would last. But much to those fans’ disappointment, Wood and Swindells broke up in 2020. Around a year after the split, Woods shed some light on her breakup with Swindells.

She told Garzia Daily, “I remember my friend saying the most helpful thing to me once about relationships. It was about how we often try to find out, ‘Who’s the goodie and who’s the baddie?’ Sometimes it’s just the combination of the two of you creating some unhealthy themes.”

Wood then reflected on her relationship with Swindells and said, “We’d had some time apart because of work, and then we realized that maybe the relationship wasn’t serving us both. We still really love each other and respect each other. It was an okay breakup, it wasn’t dramatic.”

In the end, the actress mentioned that the breakup with Swindells felt like a dam was burst, and she was hurting. “But I needed to be there because I’d become a bit numb, and it was nice to suddenly feel everything again,” she concluded her statement.