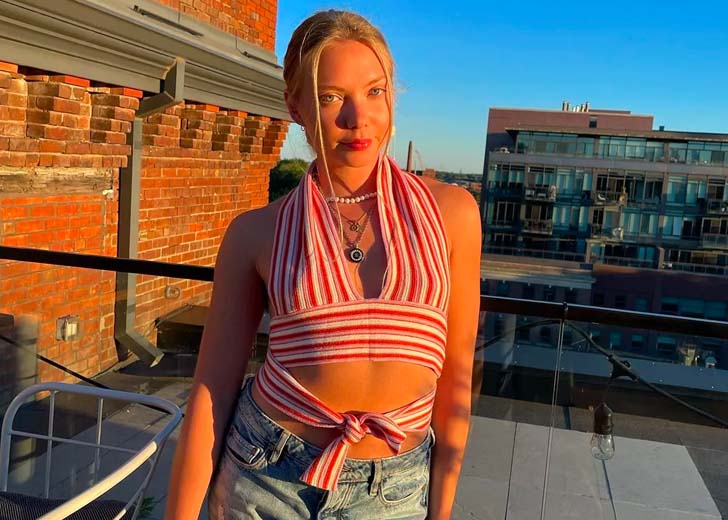 Emilia McCarthy is a talented Canadian actress set to reprise her role of Lacey in the third installment in Disney Channel’s Zombies movie franchise, Zombies 3. The film is set to premiere on Disney+ on July 15, 2022.

But, before that happens, she will appear in Paramount+’s upcoming TV series titled Skymed — which releases on July 10, 2022. In it, she will portray the role of Madison Van Camp.

Besides the two, McCarthy has been in many movies and TV shows that have given her fame. Some of them are Hemlock Grove, Maps to the Stars, Zapped, Max & Shred, Zombies, Dance Together, October Faction, and Zombies 2.

Is Emilia McCarthy dating a boyfriend?

McCarthy is an uprising actress in the entertainment industry, and not much is known about her. Thus, it’s obvious for people to be curious to learn more about her. And one of the things they want to know is about her personal life.

Her Instagram handle also gave the idea that she met her boyfriend at Wilfrid Laurier University, but it’s unconfirmed. But what’s confirmed is their relationship, which McCarthy’s Zombies co-star Meg Donnelly also gave the green light. Donnelly had commented “power couple” when McCarthy shared a picture with Gray on September 24, 2017.

Coming over to their relationship, they have been inseparable since they began dating, and their togetherness could easily be seen all over McCarthy’s Instagram feed.

The love birds have gone on vacations to different places worldwide and celebrated various festivals. However, their appearances on each other’s social media handles have begun to fade away in recent times.

Due to that, some have wondered if they have parted ways. But those speculations don’t seem to be true as the two still follow each other on Instagram. Additionally, they haven’t deleted each other pictures from social media.

The last time McCarthy posted a picture with Gray on Instagram was on August 12, 2021; the same image was later posted by Gray on September 3, 2021. Since then, it seems like they have maintained complete privacy over their relationship on the internet.

And as there is no confirmed news of their breakup, it only seems perfect to assume that the couple is still together.

If you have been checking out McCarthy’s Instagram handle, then you might find the actress sharing numerous pictures with a man named Alek Bélanger. And seeing their closeness, some might even think they might be a couple.

However, that doesn’t seem to be the case here, as nothing is going on between McCarthy and Bélanger. The two are merely best friends and even regard each other as brother and sister.

For instance, on November 16, 2021, Bélanger, a visual artist, posted a picture alongside McCarthy where the two were drinking wine. And in the comment section, the actress had commented, “my favourite brother.” “my favourite sister,” Bélanger replied.

More recently, when McCarthy shared a series of snaps alongside Bélanger saying, “a week with my BFFL,” one Instagram user commented, “If only everyone would be so lucky to have such a good friendship like yours with [Alek Bélanger]. So nice!”

Sometime after the user made that comment, both McCarthy and Bélanger seemingly agreed with the Instagram user as they replied to the comment using red heart emojis.

To sum up, McCarthy and Bélanger are not dating; they are only good friends. As for their friendship, it’s currently unknown how and when they ended up meeting each other. But one thing is for sure they have bonded well over the time they have known each other.

McCarthy was born in 1997 and raised in the suburbs of London, Ontario. She is presently 24 years of age and celebrates her birthday every year on August 28.

Her father’s name is Barry McCarthy, and her mother’s name is Margarita De Antuñano. While her father is a retired Vice-principal, her mother is the director of the Canada-Mexico Cultural Exchange Centre and a Spanish teacher.

It’s currently unknown whether she has siblings or not. Talking about her ethnicity, she is half Mexican and half Irish as she has Mexican and Irish ancestry from her parents. It’s reported that her father is of Irish origin, and her mother is Mexican Canadian.

Since her childhood, Emilia wanted to become an actress. In one of her interviews, she said, “I was about seven and literally woke up one day and said, Mom, Dad, I want to be an actress.” Her parents were supportive and didn’t go against her wish.

Another big influence on her acting choice is Ryan Gosling and Rachel McAdams. In her 2014 interview, she said that Gosling and McAdams are her inspiration. “They were also born in London, Ontario. So if they can do it, why not me?” she added.

The aspiring actress started taking acting classes at Toronto-based Armstrong Acting Studios. Similarly, she graduated from Westdale Secondary School in 2014 and enrolled at Ryerson University in 2015, majoring in film studies and minoring in psychology.