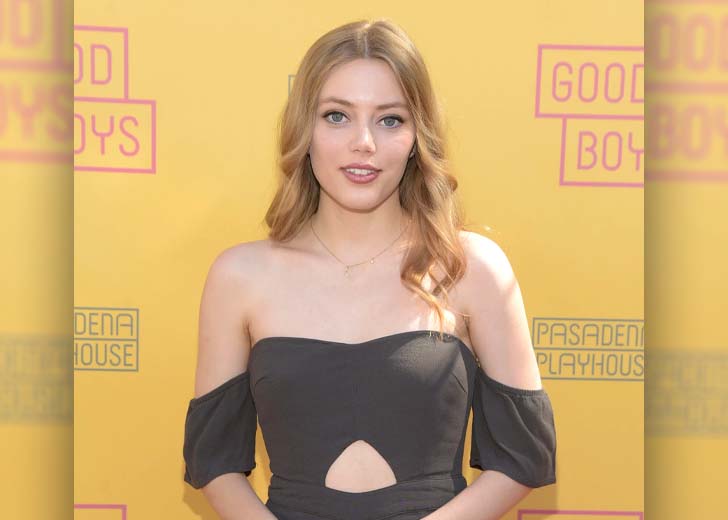 Grace Van Dien is an uprising American actress who recently made her appearance in Netflix’s Stranger Things season 4 part 1. In the globally hit show, she portrayed the role of high school cheerleader Chrissy Cunningham.

Besides that, she is best known for her performance as Brooke Osmond in another known Netflix show titled Greenhouse Academy. She appeared on the show from 2017 to 2019, in a total of 25 episodes.

Similarly, some of the other movies and TV shows she has appeared in are Army Dog, The Last Bid, Awaken the Shadowman, The Village, Lady Driver, The Binge, and V for Vengeance.

Due to her growing popularity, many people are just getting to know her. And some of them are curious to learn more about her, especially about her personal life.

In Stranger Things season 4 part 1, Van Dien’s character, Chrissy, was in a normal relationship with Jason Carver — played by actor Mason Dye, also a newbie in the show.

However, it doesn’t seem like the actress’s relationship status is the same as her character’s when it comes to real life. As of now, there have been no reports on Van Dien having a possible boyfriend outside of the on-screen world.

Additionally, no hints of a partner could be found on her Instagram handle. She has only posted pictures of her day-to-day life, family, and profession. The only thing her social media handle proved was that she likes to share aesthetic nature pictures.

To conclude, it could only be said that Van Dien isn’t dating a boyfriend as of this moment. It seems like she is giving most of her focus to building a successful acting career. And even if she has a boyfriend, that will remain unknown until she reveals anything to the public.

Grace Van Dien was once linked to Connor Paolo

While Van Dien might not have a boyfriend now, she was once linked to her fellow colleague and actor Connor Paolo.

The rumored couple was first seen together when they walked down the red carpet of Charlie Says screening at the 2019 Tribeca Film Festival. At the time, not many had the idea of the two possibly dating.

But it seemed to change after they worked together on the 2020 short movie titled Monsters and Muses. In the short movie, Van Dien served as the director and Paolo worked as the writer.

Rumors start to spread across the internet and many believed they were a thing. However, neither of them deemed it perfect to confirm or deny those rumors. Additionally, there was no strong evidence of them dating.

And as nothing about their rumored romance could be proven, it stayed as gossip only.

Who are Grace Van Dien’s parents?

Born on October 15, 1996, the actress was raised in the city of Los Angeles, California. She goes by the birth name of Caroline Dorothy Grace Van Dien and the nickname of Gracie.

The 5 feet 3 inches tall actress has renowned parents. Her father is Casper Van Dien and her mother is Carrie Mitchum — both are renowned actors in the entertainment industry.

After her biological parents parted ways, her father got married twice: to Catherine Oxenberg (from May 8, 1999, to 2015) and to Jennifer Wenger (from June 2018 to now).

Is Monica Barbaro Still Dating Boyfriend Connor Tillman? All You Need To Know