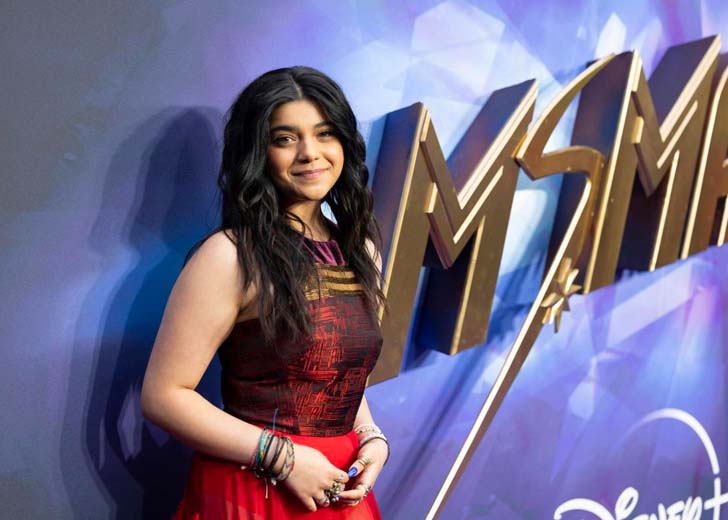 Iman Vellani is a newbie actress in Hollywood who has already won the hearts of millions worldwide through her captivating performance in the brand new Disney+ show Ms. Marvel — which premiered on June 8, 2022.

In the six-episode mini-series, the young actress portrays the role of Kamala Khan and follows her journey to becoming the superhero, Ms. Marvel. Vellani stars alongside Matt Lintz, Rish Shah, Zenobia Shroff, Nimra Bucha, and Yasmeen Fletcher in the show.

As of now, only two episodes have been released, but the audiences are already loving it. Besides, the show even got a Rotten Tomatoes score of 95% — which is the best among all Marvel movies and TV shows.

Coming back to Vellani, her next acting gig is another Marvel project — a movie entitled The Marvels. And as the Ms. Marvel show is based within the Marvel Cinematic Universe, Kamala’s journey will tie into The Marvels.

In the movie, Vellani’s Kamala Khan / Ms. Marvel will join hands with other Marvel superheroes like Captain Marvel – played by Brie Larson, and Monica Rambeau – played by Teyonah Parris.

How old is Iman Vellani?

Vellani is currently 19 years of age and celebrates her birthday every year on September 3. Her zodiac sign is Virgo.

Born in 2002, Vellani was primarily raised in Markham, Ontario. Her family had moved to Canada when she was only one.

Coming over to her education, she is a graduate of Unionville High School. Similarly, she was set to enroll at the Ontario College of Art & Design University if she wasn’t cast in Ms. Marvel.

In her interview with The Hollywood Reporter, she mentioned that her main focus would have been on integrated media. Besides that, she is a former member of the Next Wave Committee at the 2019 Toronto Film Festival.

Like her character in Ms. Marvel, Vellani also comes from an immigrant Pakistani-Muslim family. Born in Karachi, Pakistan, Vellani’s family moved to Canada when she was one year old.

The actress was born to Ismaili Muslim parents from Pakistan. As of this writing, there are little to no details known about Vellani’s father and mother, such as their names and professions.

It’s so because Vellani only gained the limelight recently – Ms. Marvel is her debut role – and before being an actress, she was an average person without fame. Additionally, she prefers privacy and doesn’t reveal many details about her family life.

Due to the same reason, it remains unknown whether Vellani is the only child of her parents or has any siblings.

Vellani was born in Pakistan but was mostly raised within the boundaries of Canada. Therefore, she might hold both Pakistani and Canadian nationality. Besides, several media outlets have referred to her as a Pakistani-Canadian actress.

Coming over to her ethnicity, she is Muslim, and her ethnic group is Islam. Furthermore, she is of Pakistani descent from her parents.

Growing up in Canada as a Muslim and a Pakistani wasn’t easy for Vellani as she found it hard to make friends who were also a part of her culture.

In her recent interview with Arab News, she said, “Being Pakistani was a part of my life I was very dismissive about, and I felt disconnected from my culture prior to this show. I was born in Pakistan, but I moved to Canada when I was one.”

“I didn’t have any Muslim or Pakistani friends. I felt that isolation that comes with not feeling understood. As close as I get to my school friends, they’re never really going to know my experiences and I’m never going to really know theirs.”

But, when Vellani was cast in Ms. Marvel and went to film it, she was surrounded by several South Asian actors whom she grew up watching on TV. The co-creator of the Kamala Khan / Ms. Marvel character, Sana Amanat [a Pakistani-American], was also there to take the actress under her wing.

Vellani told the outlet, “Honestly, one of the biggest things for me is just having brown friends for the first time in my life. I was sitting on set with my co-star Rish Shah and listening to Bollywood music; that’s something I’d never done before in my life with anyone but my parents.”

“I’d never had the chance to socialize with people from the same background as mine, and it really made me see things in a new way,” she added.

As Vellani went on, she talked about the parallels between her and her character. She concluded by saying that she now could not be prouder to be Muslim and to be Pakistani.