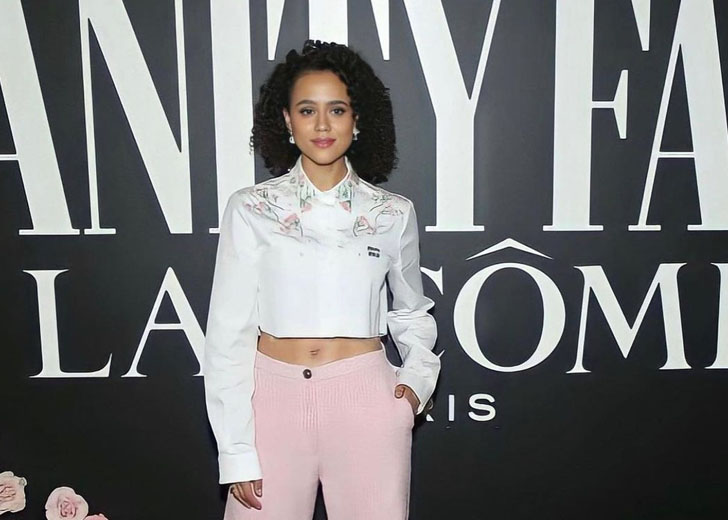 Nathalie Emmanuel is an English actress known for playing the role of Missandei on the HBO fantasy series Game of Thrones and Ramsey in Fast & Furious 7. She is currently set to star as Evie in the upcoming horror-thriller movie The Invitation. The film will release on August 26, 2022.

Emmanuel’s on-screen career began in 2006 when she portrayed Sasha Valentine in the soap opera Hollyoaks. She then made appearances in a couple of television shows before making her big-screen debut in the movie Twenty8k. As she continued, she got cast in multiple movies and TV shows.

Some of her acting gigs include Maze Runner: The Scorch Trials, The Fate of the Furious, Maze Runner: The Death Cure, The Titan, The Dark Crystal: Age of Resistance, Four Weddings and a Funeral, Die Hart, F9: The Fast Saga, Army of Thieves, and Last Train to Christmas.

Who is Nathalie Emmanuel dating?

And she isn’t single either. Besides, she is currently dating her longtime boyfriend, Alex Lanipekun. As per DailyMail, the fellow English actors have been in a romantic relationship since 2018 and made it official when they attended the Ischia Film Festival in Italy in the same year.

However, the actress has been super private about her current romance and hasn’t provided any information, either in her interviews or through her social media handles. And it’s perfectly understandable that she might want to keep their relationship a secret.

Nonetheless, their togetherness hasn’t been a secret to the public, as they even co-produced the short film Run, which premiered at the 2018 Cannes Film Festival. They also shared the screen when they appeared in the movie The Titan. In the film, Emmanuel played the role of W.O. Tally Rutherford, and her boyfriend portrayed the role of Andrew Rutherford.

Additionally, the love birds have been caught having a stroll or spotted together at several sporting events and film festivals. One of their most recent outings was in September 2021, when Emmanuel and Lanipekun took a walk in Notting Hill. The couple had coordinated their outfits as they donned brown tan jackets, and there were no signs of PDA.

Nathalie Emmanuel and her boyfriend Alex Lanipekun during their stroll in Notting Hill (Photo: Nash/Backgrid)

Emmanuel’s boyfriend, age 41, previously attended the Royal Academy of Dramatic Art in London before leaving his studies after receiving a role in the BBC drama MI-5 (formerly titled Spooks). His other acting gigs include Second Coming, Homeland, The Titan, Riviera, Domina, and The Rising.

Nathalie Emmanuel’s thoughts on dating as a celebrity

When you’re a well-known public figure, it’s common to feel like it’s hard to keep your life away from the limelight. And Emmanuel feels the same, particularly about her love life. She has previously acknowledged that dating in the business and keeping her dating life private have both been difficult.

The actress talked about the challenges of dating in the spotlight and finding the ideal partner when she appeared on Jimmy Kimmel Live! in April 2017. In addition, she admitted that while she was traveling around, it was difficult to find someone who would support her in continuing to go forward and wasn’t intimidated by her accomplishments.

The only other person Emmanuel has been openly associated with outside Alex Lanipekun is her ex-boyfriend Devon Anderson. The former couple ran into each other on the sets of Hollyoaks and clicked right away. They started dating in 2010, and their relationship ended around 2017.

People once conjectured that she was having an affair with Jacob Anderson, a co-star in Game of Thrones. But that was untrue, and the two are good friends.

Other than that, there aren’t any reports of Emmanuel’s previous relationships. It probably won’t ever find out whether she has dated anybody else because she is highly secretive about her romantic relationships.