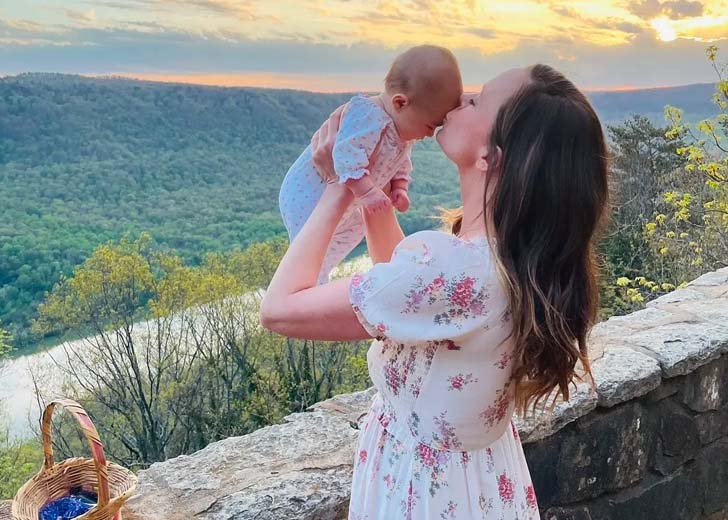 Rachel Boston and her fiance Tolya Ashe announced they were expecting their first child, a daughter, on October 19, 2021. And the engaged couple welcomed a daughter named Grace earlier this year.

Since then, the new mother has been settling into motherhood and managing her acting career along the way. But with everything in hand, Boston has still managed to share glimpses of her baby girl.

The actress occasionally takes to her Instagram handle to share pictures of or alongside her baby Grace as a post or via stories. And all of those pictures are very adorable. Here is a brief look at those pictures!

On January 24, 2022, Boston took to her Instagram handle to announce the birth of her baby girl. She posted a single picture of her daughter wearing pink clothes and wrote, “Welcome to the world, my little angel!!!!”

“Baby Grace is here, and our hearts are so very full!!! Thank you to everyone surrounding us with so much love,” she added along with some hashtags like “#amazinggrace” and “#welcomehome.”

On the same day, she shared another picture, which showed the actress holding her baby in her arms. Looking at the image’s background, it seems that it was taken sometime after the baby’s birth, while Boston was still in the hospital.

A month about love

February is all about love, and Boston opened the month by sharing a cute picture of herself holding her baby. The photo seemed to be from a small after-birth photoshoot.

The actress and her baby were wearing pink outfits, and the background was also pink-colored. Furthermore, Boston was sitting in a pink-colored chair.

On February 20, she posted another picture of her daughter as baby Grace slept peacefully in her crib. “Mood. Happy weekend!!! #amazinggrace,” Boston captioned her post and added a red heart emoji as well.

Boston deprived her followers of seeing any more new pictures of her and her baby girl in the month of March. Nonetheless, that was compensated in the following months as she posted multiple snaps with her daughter.

On April 7, The Last Bridesmaid star posted a selfie in which she held her baby on one arm and delivered a soft kiss on the cheeks. In the photo, baby Grace seemed more focused on the camera rather than her mother.

On April 16, the mother-daughter duo celebrated the Easter weekend by taking a little walk up to the forest. Boston had shared a picture of her holding her baby in both arms as she kissed baby Grace’s forehead. A fantastic view of the forest and sunset was seen in the background.

Furthermore, Boston posted some pictures on April 25 as well, as the mother-daughter duo seemed to enjoy some fresh air in the forest. The baby’s mother was wearing a t-shirt with a text reading, “Never underestimate the resilience of a mother.”

On Sunday, May 8, 2022, Boston celebrated her first Mother’s Day. Marking the occasion, she posted a photo of her with her baby, wearing all white. She wrote, “Happy Mother’s Day!!! Of all the blessings life has to offer, being your mama is my absolute favorite. You are the purest love.”

Three days later, she posted another picture with her baby. In this photo, she was seen sitting in a comfortable glider chair as she held her baby on her lap and read a children’s book. She mentioned in the caption that it was their happy place.

On May 17, Boston took to her Instagram handle to share a photo in which she was holding her baby as the two sat outdoors – with an amazing view – in a three-seater hanging seat made out of woods. “Our little corner of the world,” she captioned her post.

Boston’s final Instagram post with her baby – for now – came on June 2, 2022, when she shared an Instagram reel by using singer Amber Leigh Irish’s acoustic version of the song ‘Yellow’ — originally sung by the rock band Coldplay.

In the Instagram reel, the mother-daughter duo was sitting in the same glider chair as Boston read scripts of her upcoming acting gig while making her daughter giggle. The caption stated that her daughter is her new and favorite study partner.