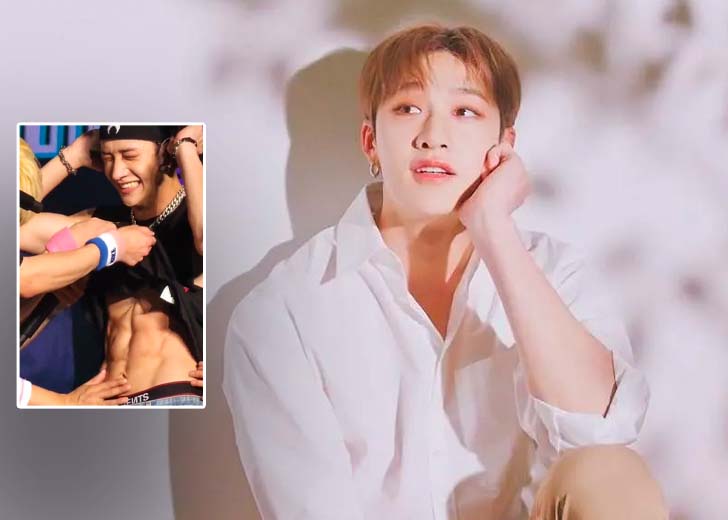 The band was in America as part of their MANIAC global tour around July 2022, where their spectacular performances enthralled their fans.

Chan frequently showed off his abs during “Victory Song” concerts as a nod to his renowned role in the song video.

Here are some more details on Chan’s flashy ab reveal, fan reaction, how he maintains his health, and those abs.

Bang Chan’s reaction after showing his abs was ‘cute’

In July 2022, fans were more interested in the idol’s “cute” reaction to his own confidence after he flashed his abs to the crowd. Despite the fact that Chan was already wearing a crop top for the performance, he went to show off his abs to the audience.

Chan went away, his head bowed in disgrace, as soon as he acted his portion. In the clips posted by fans on TikTok, we can see the singer smiling shyly.

“He’s so cute when he’s shy,” a fan wrote in the comment section. “Haha kills me every time…does it and then immediately shy away..ha…are you really being shy,” another fan wrote.

Stray Kids fans have always been crazy about their idol’s performance and even crazier about Chan’s abs during the performances.

One fan took it to Twitter and wrote, “Bang Chan’s abs; a dangerous thread to make u all suffer.”

People are definitely enjoying their favorite band’s live tour and some abs show in action.

Despite the fact that there is no disclosure about his actual workout schedule, Chan has mentioned his workout on his Instagram account.

For instance, numerous dance videos have been posted as they dance on stages, and dance is also a form of exercise.

According to Health Yogi,  dancing assists every K-pop singer in maintaining a slender physique that maintains their body sleek and strong.

There are also videos of Chan flexing in the gym on Instagram. We can say that Chan doesn’t shy away like he did while hitting those weights in the gym sessions. That is why he has an amazing physique to show his fans.

Talking about his diet plans, the singer explained in a YouTube video that he doesn’t have any specific diet plans or foods. However, he is cutting his food intake and only eats one meal daily.

“I wouldn’t say it’s a diet, but I’ve been trying to [you know] cut down on food,” he said in the video. He explained that he was trying to lose some weight for his performances.

“I am like, eating one meal a day, and at times I am hungry i just eat [drink] protein or eat like a bar,” he added, saying he indulges in energy bars or nutrition bars if he feels hungry.