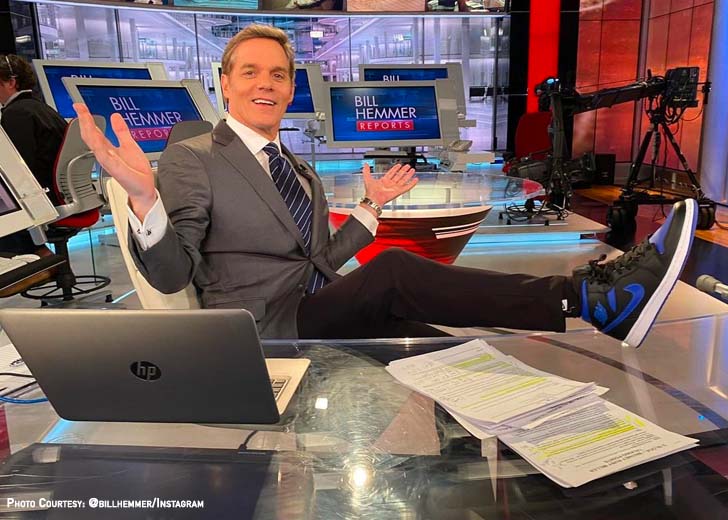 Bill Hemmer is one of the reputed names in the field of American journalism. The New York-based journalist currently serves alongside Dana Perino as the co-host of FOX News Channel’s America’s Newsroom — he joined FNC in 2005.

In over 15 years of his service at FNC, he has covered major stories, including presidential elections, Russia’s invasion of Ukraine, Democracy 2021: Virginia Showdown, the U.S. summit with North Korea in Vietnam, deadly terrorist attacks in Paris, and Hurricane Katrina relief efforts.

Before his tenure at FNC, the Miami University graduate served on other networks such as WLWT-TV, WCPO-TV (CBS 9), and CNN. Thanks to all his works, he has received many honors and awards, including two Emmy Awards.

That said, there is no denying that Hemmer has established himself as one of the known public figures in the news industry. And as a result, people have become invested in learning more about him, especially about his personal life.

Is Bill Hemmer married to a wife?

As of this writing, Hemmer’s personal life remains in the darkness as he hasn’t shared any details about possibly being married to a wife. It’s also unknown if he is currently dating a girlfriend.

Despite his status as a public figure, the American journalist has chosen to keep things private regarding his love life. And while he occasionally shares pictures with his female co-workers, there isn’t any scent of a possible work romance.

Considering all that, it’s only fair to assume that Hemmer’s present relationship status is single. He also hasn’t been married to anyone in the past and doesn’t have any children from his former relationships.

Before Hemmer’s dating life became unknown, he was in a long-term relationship with his now-former girlfriend, Dara Tomanovich, a Canadian model.

The former love birds began dating in 2005, and their first public appearance was at the Victoria’s Secret Fashion Show in the same year. As their togetherness continued, they made more public outings.

However, neither publicly spoke about their romance and kept things low-key. And eight years later, in 2013, the two decided to part ways for good. The reason behind their break up is yet to be known.

Around a year after their split, in June 2014, Tomanovich was seen together with Britain’s Prince Andrew at the Royal Ascot races.

A month later, on July 16, Tomanovich became headlines after being arrested and charged with drunk driving and crashing her Porsche in West Village, Manhattan.

At the time, Page Six reported that the model tried to talk her way through by name-dropping former Mayor Michael Bloomberg and threatening she could have the police officer “fired or transferred.”

“I observed the defendant had watery eyes and heavy eyelids, had the odor of an alcoholic beverage . . . and was unsteady on her feet,” was the statement given by the officer as per the complaint.

Tomanovich was ultimately charged with DWI, released without bail, and was due back in Manhattan Criminal Court for a hearing on misdemeanor charges.

Speaking more about the model, she was born in 1969 and raised in Toronto. She has modeled for brands like Chloe, L’Oreal, British Vogue, and Marie Claire. Furthermore, she has appeared in movies like Bio-Dome and Being Flynn.

Keep reading GB Issue for more stories like this!

Who Is Rafael Reyes? A Look at His World of Art and...