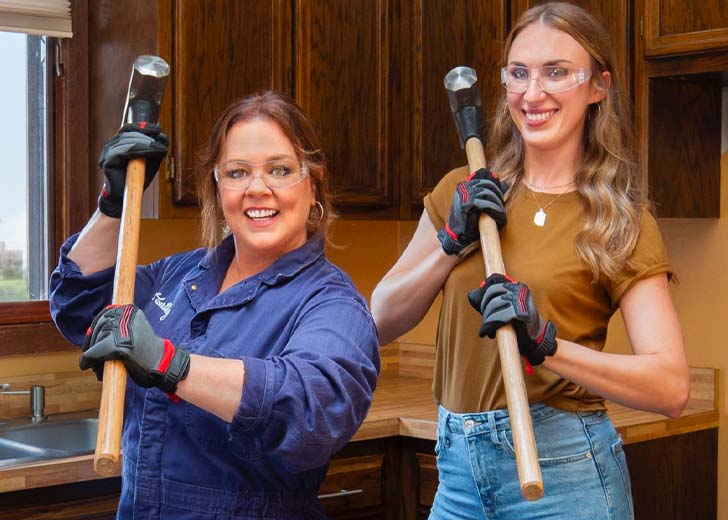 Jenna Perusich is an uprising actress who is making her way through the entertainment industry. She is presently set to appear as the co-host of the new HGTV show The Great Giveback With Melissa McCarthy and Jenna Perusich.

As suggested by the show’s title, two-time Academy Award-nominated actress Melissa McCarthy will be on the show as well, and she will serve as the other co-host. Here is a fun fact if you don’t know it already, McCarthy is Perusich’s cousin.

The Great Giveback With Melissa McCarthy and Jenna Perusich is a design and renovation that premieres on HGTV on June 13, 2022, at 9/8c. And before the show airs, have a look at everything we know about Jenna Perusich!

How old is Jenna Perusich?

As of this writing, it’s unknown when Perusich celebrates her birthday. However, in her recent interview with HGTV, she mentioned that she is 18 years younger than her cousin McCarthy.

“There are 18 years between Melissa and me,” she told the outlet. Considering that McCarthy is presently 51 years of age, it makes Perusich around 33 years of age. So, she might be born in 1989.

Multiple media outlets have mentioned that she was born in 1991, which makes her 31 years of age. But, that information seems to be wrong. As for her zodiac sign, it cannot be said until her birthday is known.

Perusich has always considered her parents as her role models and she has learned a lot from them. Her father’s name is Jimmy Perusich and her mother’s name is Connie Perusich. She could occasionally be seen sharing old pictures of her parents.

Besides that, there is little to no information on her parents and what they do for a living. Additionally, it is also unknown whether she is the only child of her parents or has any siblings.

Although she hasn’t shed many details about her family life, Jenna had a lot to say regarding how her parents inspires her. She told HGTV, “I’ve learned so much from my parents about art, design, fashion, and music. Yet it’s their dedication to each that I admire most.”

“Married for 37 years, they define what love is all about. I’ll be watching TV downstairs in their house only to walk upstairs and find them laughing and dancing to music, enjoying the moment. They are my role models,” she added.

Jenna Perusich with her mother Connie Perusich in 2015 (Photo: Instagram)

Similarly, Jenna also spoke a little about her relationship with McCarthy. She said, “There are 18 years between Melissa and me, so we really didn’t grow up together.”

After that, Jenna mentioned that she became closer with McCarthy once she moved to Los Angeles, to pursue a career in acting and that McCarthy became her mentor as she offered “amazing career advice and guidance.”

How tall is Jenna Perusich?

Much like her birthday, the details about Perusich’s height and weight remain under the curtains. Nonetheless, she seems to have a height of above 5 feet 5 inches as she is very much taller than her cousin McCarthy who is 5 feet 2 inches or 1.57 meters tall.

Jenna Perusich is in a committed relationship with her boyfriend

Perusich has been in a committed and long-term relationship with her boyfriend named Andrew Nelson. She has stated that Nelson is a television marketing executive.

In the above-mentioned interview with HGTV, the uprising actress mentioned that she met her future partner around two years ago – around June 2020 – via a dating app. At the time, the global pandemic was at an all-time high and they had to wait before meeting face to face.

But, Perusich mentioned that meeting during a pandemic also has some advantages. She said, “You could say we had an old-fashioned courtship, FaceTiming five times before we ever met!”

Perusich and Nelson continued their relationship virtually and got to meet each other physically once the spread of the pandemic slowed down. As of now, the couple is still together and going on strong.

Speaking on their relationship, Perusich said, “Andrew is my complete opposite. At times, I’m like a balloon floating all over the place, and he’s this great anchor keeping me grounded.”

The love birds are now deciding to adopt a small dog, similar to the one Perusich grew up with [a fluffy white Bichon]. But, she says that Nelson wants a bigger dog, and they might end up getting two dogs. You could see more of the duo via Perusich’s Instagram handle.

Perusich was interested in acting from a young age and perhaps that’s why she chose to major in theater while she was at Columbia College Chicago.

When she finally did so, she decided to move to Los Angeles so that she could pursue a career in acting — she moved to Los Angeles around 2013. After settling down in Los Angeles, she enrolled at Groundlings Theatre & School.

As she studied there, she started picking up small appearances in multiple movies and TV shows. Some of them are Mike & Molly, Super Deluxe Digital, The Boss, Nobodies, Life of the Party, Superintelligence, and Cafe Americano.