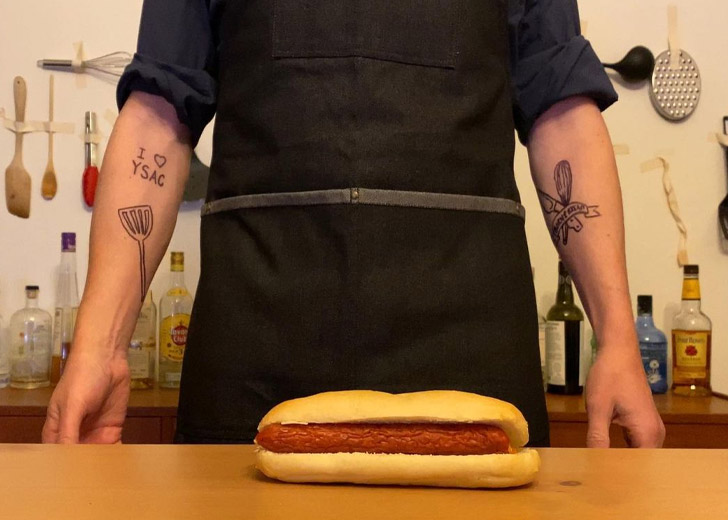 You Suck At Cooking is a famous Canadian YouTube channel for its not-so-delicious but awkwardly funny cooking videos.

The channel’s videos are all about cynical humor. The videos cover various topics, including kitchen tips, meals, music videos, and a series involving sentient eggs. His most popular videos include Modified Ramen, Sandwich of Justice, and seven ways to chop an onion.

Who is You Suck at Cooking guy?

Many people enjoy the videos on the You Suck At Cooking channel. As a result, fans want to know who the man behind the cooking show is. However, the identity of this mysterious narrator remains unknown.

The only thing we know about the You Suck At Cooking creator is that he is a man who worked for Randi Siegel Entertainment. He also has tattoos on his hands, including I Love YSAC text on the right hand and a Spatula picture on the other.

A post shared by You Suck at Cooking (@yousuckatcooking)

Many You Suck At Cooking viewers had asked his name in the comments section of his videos. But he never addressed the question, which shows that he is unwilling to reveal his real name.

Is the face of the creator of You Suck at Cooking revealed?

The creator of You Suck at Cooking has never shown his face in any of his hundreds of videos. In each video, he only shows his body and one hand.

Along with his name, many of his followers are curious to know how he looks. One fan even commented on his Instagram post, “All the internet wants is a glimpse of your face, buddy boy.”

Likewise, another person questioned when he would reveal his face in the YouTube video. Upon seeing the comment, one fan responded, stating that the YouTuber must enjoy his privacy and is content with how things are now.

Although the YouTuber has not revealed his identity, many of his fans on his subreddit believe he should keep doing what he does best: providing cooking tutorials with oddball humor.

Is You Suck at Cooking’s creator dating?

As of 2022, the YouTuber may or may not be dating. He has not even revealed his name or appearance, so nothing is known about his personal life.

Although the YouTuber’s love life is unknown, we can be sure he is in love with his work. His YouTube channel has grown successfully due to his hard work and dedication. In his video, he cooks food in his own peculiar way.

Similarly, he shows off his great humor by providing commentary while cooking. His videos mainly consist of cooking tips for meals, with a few music videos thrown in for good measure.

Youtuber of the channel You Suck at Cooking makes review videos. (Source: YouTube)

With all of his popularity, You Suck at Cooking must earn a good living from his YouTuber channel, which adds to his net worth.

The YouTuber makes additional money from his merch on his website, the sales of his cookbook, and various brand promotions. He also makes review videos, earning money from sponsors and YouTube.