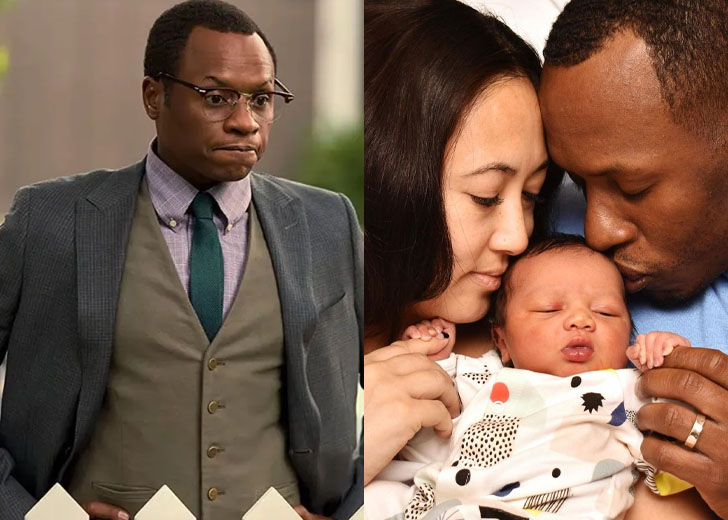 Malcolm Goodwin is a talented American actor renowned for his portrayal of Clive Babineaux in The CW show iZombie. He is currently garnering the limelight for his role as Oscar Finlay in the Amazon Prime show Reacher.

The 39-year-old actor has come a long way since he made his acting debut in 1997. He now has a flourishing career in the entertainment industry and a lot more to be achieved in the future.

Not only does he have a successful professional life, but Goodwin also has an equally – or even more – blissful personal life that he relishes with his longtime wife Vanessa Goodwin.

Welp! That might have just ended the talks of Malcolm being gay. Read on as we discover more about the actor’s wife and their married life.

Who is Malcolm Goodwin’s wife?

Malcolm’s wife, Vanessa, is a multi-talented personality who is also involved in the entertainment industry. She has worked as a producer, writer, director, actress, and more.

Malcolm Goodwin with his wife Vanessa Goodwin in 2014. (Photo: Facebook)

She first stepped foot in the entertainment industry in 2006 as the art director of the short movie Titan Safety Systems. Years later, in 2011, she made her acting debut through the TV movie titled The Tommy O Show Starring America — she played the role of Claws.

Talking about her works as a producer, she has produced movies and TV shows such as We Are Brave, Be the Light, Raw Talk Not Food, Coming Aut with Liz and Eddie, Mom You Can Finally Ask Me That, and Construction.

Similarly, she has worked as an additional crew — such as production secretary or assistant to executive producers and others — in TV movies and shows such as Cinnamon Girl, Sons of Anarchy, Hieroglyph, The Bastard Executioner, and Pitch.

Additionally, her LinkedIn profile mentions that she has been working as the manager of development and digital products at Cosmos Studios, Inc. since December 2017. In 2021, she joined Vision Vehicle Studios Inc.

As per reports, Vanessa was born in 1978, making her 43 years of age as of now. Her birth name is Vanessa Layug. Additionally, she is of Filipino descent and was probably born in The Philippines.

While her father’s name is Bong Layug, her biological mother’s name is unknown. But, it’s reported that her parents are separated and she has a stepmother named Anamari Godinez. She also has a brother named Paolo Layug.

As mentioned earlier, Malcolm has been married to his wife, Vanessa, for a long time. However, it’s unknown when and where the couple first met each other and how long they were together before tying the knots.

Nonetheless, Malcolm has given some clue through his personal Facebook account that he and his wife were together since the early or mid-2000s. After being together for a while, the now-married couple decided to take a further step in their relationship.

On September 15, 2005, Malcolm and Vanessa walked down the aisle and shared the wedding vows to become a husband and wife duo. Since then, the two have always been together and have supported each other in every situation.

A picture of Malcolm Goodwin with his wife Vanessa Goodwin (Photo: Facebook)

But, as the couple prefers privacy around their relationship, they don’t publicize it much either on the public or on their respective social media handles. Perhaps that’s why many might not even know that Malcolm is a married man.

But not only they are married, but they are also parents to a lovely son named Apollo Goodwin. The couple welcomed their first child in February 2020, more than 14 years after getting married.

Since the birth of their child, the proud father occasionally takes to his social media handles to share cute pictures and videos alongside his son. For instance, on March 12, 2020, he shared a series of pictures — from his wife’s pregnancy photoshoot to his son’s snaps.

As of this writing, Malcolm and Vanessa have been married for more than 16 years. On the occasion of their 16th wedding anniversary, September 16, 2021, he even took to his personal Facebook account to share a picture of him alongside his wife and son.

Accompanying the family picture was a sweet caption that read, “16 years and counting! And we get to celebrate at home after being away for so long:) Happy Anniversary Vanessa Goodwin! Love you!”

Going by all that, it surely seems like Malcolm has found a perfect partner in Vanessa and is a proud father of his son.