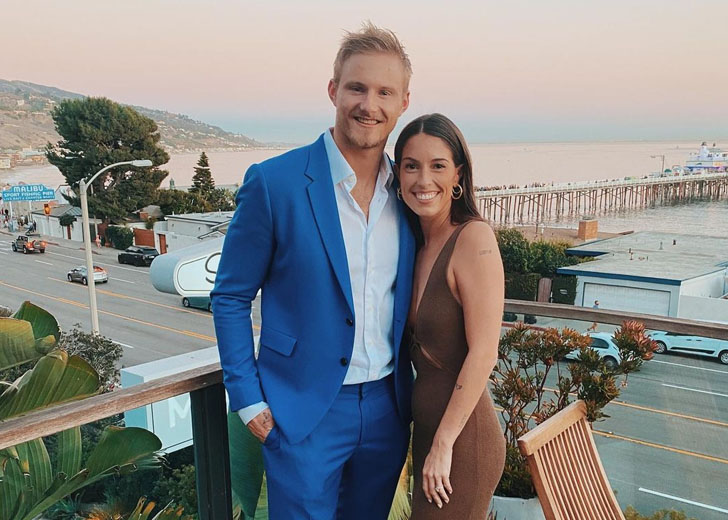 Alexander Ludwig is a talented Canadian actor and musician who became well-known for playing Cato in The Hunger Games. Later, he garnered the limelight by portraying the role of Björn Ironside in the History Channel series Vikings. He recently played the lead role of Ace Spade in Heels.

He started his career as a young boy, then became well-known as a teenager after appearing in Race to Witch Mountain and The Seeker: The Dark Is Rising. Ludwig is now set to star in the music video for Nicki Minaj’s most recent single, ‘Super Freaky Girl.’

Coming over to the actor’s personal life, Alexander is currently married to his wife, Lauren Ludwig (nee. Dear). According to her Instagram bio, she is an entrepreneur and has managed partnerships and communities at VRAI.

Alexander revealed his relationship with Lauren via an Instagram post in July 2020. As they continued their relationship, they often flaunted multiple pictures alongside each other. For instance, on October 7, 2020, he posted a photo with his now-wife and wrote, “Found her,” along with a red heart emoji.

After more than five months of dating, on November 23, 2020, Alexander decided to take a further step and proposed to his partner with a diamond engagement ring. While announcing their engagement news, Lauren shared a series of pictures showing her engagement ring and wrote, “Goldilocks and Bambi live happily ever after.”

This charming couple married after a month-long engagement on January 4, 2021. And to share the wedding vows, they eloped to Blue Sky, Utah. Their private and intimate wedding was held at The Lodge at Blue Sky, with a priest, their pet dog Yam, and photographer Gabriella Santos in attendance.

“We decided to elope. It has been such a crazy year, but it certainly puts things into perspective. Life is too short, And I didn’t want to spend another day without calling this beautiful woman my wife. Of course, when things settle down, we will have a proper celebration with our friends and family,” the actor wrote while sharing the news about his marriage.

Since their wedding day, Mr. and Mrs. Ludwig have enjoyed a strong bond as ideal wedded partners. On their social media accounts, the married couple posts gorgeous images and never miss an opportunity to show off pictures of their pet.

Alexander Ludwig and Lauren Ludwig open up about miscarriage

Since they have been together, Alexander and Lauren have tried to have a child three times. Unfortunately, all three attempts have resulted in a miscarriage. And while it’s a private matter, the couple has been quite open about it.

On May 22, 2022, the Vikings star posted the heartbreaking news via Instagram. He posted a picture of kissing his wife as she lay down in a hospital bed. In the caption, he wrote, “This woman’s strength astounds me every time. I love you, @laurendludwig, and your resilience through this just is one more of the countless reasons I love you.”

“All the bumps life throws our way, we got this,” he added. To encourage the normalization of conversation about miscarriage and to reassure women who have experienced miscarriages that they are not alone, he reposted his wife’s lengthy letter about the condition.

On the same day, Lauren also shared a heartfelt Instagram post stating she wasn’t sure to talk about her miscarriage, but she “thought we all need to start talking about the truth more.” “I want to help folks appreciate how common miscarriages are and how they aren’t something to be embarrassed about,” she continued when asked why she wanted to share.

“Last week @alexanderludwig and I had our 3rd miscarriage. I decided I wanted to share because I don’t think it’s a shameful thing to talk about. I want to help others realize how common miscarriages are and how they aren’t something to be embarrassed about,” were her other words in a lengthy caption.

The Heart of Champions star was in an open relationship with actress Kristy Dawn Dinsmore in 2016. The two met on the sets of Vikings after Dinsmore joined the cast of the historical drama as shield maiden Amma.

When Dinsmore’s shieldmaiden role first appeared, Alexander wrote, “Working with my woman over the past two years on #Vikings was one of the greatest joys of my life.” However, it seems like their bond didn’t last long, as they broke up after a brief time.

Before he dated the actress, he briefly dated Olympic skier Lindsey Vonn in April 2016. Furthermore, he was in a relationship with model Nicole Pedra in August 2012 and was rumored to have dated Leven Rambin in January 2012 and AnnaSophia Robb in 2008.