"I met my girlfriend on the show [Cybill]," Peter Krause reveals how he met Alicia Witt. 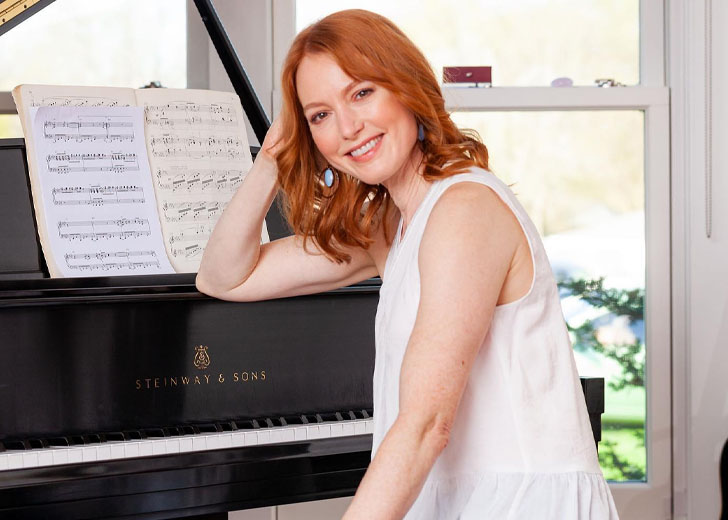 Alicia Witt, aka Alicia Roanne Witt, is a well-established American actress, singer, and pianist. She initially gained fame for her acting performances in movies and TV shows such as Dune, Twin Peaks, Fun, and Cybill.

Her career has seemingly taken a musical prodigy turn after 2013, with her appearing in eight annual Hallmark Christmas movies. Some of them are Christmas on Honeysuckle Lane, The Mistletoe Inn, and Backyard Wedding.

Witt’s professional life could be said as a successful one with her appearing in some well-acclaimed recent acting projects such as Nashville, The Exorcist, Spare Room, Orange Is the New Black, Christmas Tree Lane, and Alice.

But, what of her personal life? Is it as successful as her professional life? The answer to these questions is quite hard to get. It is because the actress has done an excellent job in hiding her romantic life from everyone.

Does Alicia Witt have a husband?

Witt’s current relationship status seems to be single. The conclusion comes after analyzing information available about her present love life on the internet.

There are no reports of the actress being married to a husband as of now. She also hasn’t been spotted with a life partner in public. Similarly, she hasn’t provided any clues on being married via her social media handles.

The same thing applies to the question of whether she has a boyfriend or not. Considering all that, it’s only fair to say that she isn’t married to a husband or is dating a boyfriend right now — until Witt reveals otherwise.

Alicia Witt was reportedly married in the past

Witt has always been a private person and hasn’t revealed everything about her relationships to this date, whether those relationships are of past or present.

Nonetheless, there have been some reveals in that area. The 46-year-old actress was reported to be married to actor and producer Peter Krause.

During an interview with Buzzfeed, Krause revealed that he met Witt on the sets of the show Cybill, in which they shared the screen together. The couple reportedly began dating in 1996 and parted ways three years later, in 1999.

However, in between their relationship, it is still unknown when and where they shared the wedding vows. It’s also undisclosed why the couple decided to split.

Two years after her relationship with Krause ended, in 2001, Witt formed a romantic relationship with film director Nathan Foulger. Later, it was reported that the duo got married in 2003 and ultimately parted ways for good in 2006.

However, these reports turned out to be false – the one with Foulger – when the actress herself addressed the topic in a Facebook post of January 25, 2013. She first mentioned how several outlets have reported that she and Foulger married in 2003 and got divorced in 2006.

She had also put out a link to an online outlet that had stated she used to date Eric Clapton. Witts denied both of this false information and clarified that she and Foulger were in a dating relationship only from 2001 to 2006.

Years later, the Citizen Ruth star once again took to her social media handle to clear another rumor about her love life. On August 12, 2018, she took to her Twitter handle to link an article about her personal life and write something of her own.

As per her tweet, that online outlet had reported false information, which is she was married to an investment banker, and they shared two kids named Luke and Emma Grace. “Oh! I’m worth $50M!!” she added humorously.

Back in 2012, it was heavily speculated that Witt was in a relationship with the American singer-songwriter Ben Folds. The news gained quite the attention as both were public figures – and Folds was married and divorced four times before that.

By November 2012, it was confirmed that the two were indeed in a relationship, that too for four months. As time passed, the couple worked together on a few songs, and it seemed everything was fine in their personal lives.

However, that wasn’t the case as Witt and Folds reportedly parted ways two years later in 2014. The reason behind their breakup hasn’t been disclosed.

There have been no reports of the actress being linked to a man or dating someone after that. She has firmly kept her romantic life away from the limelight, and we all can respect and value her privacy.