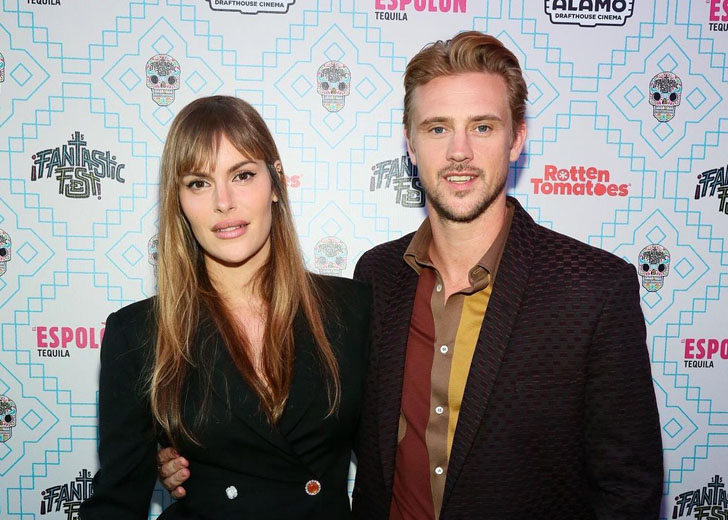 Boyd Holbrook is an American actor who is currently in the spotlight for his amazing performance as The Corinthian in the Netflix show The Sandman, which aired on August 5, 2022. In addition, he had recently appeared as John McBride in The Cursed and Ty Shaw in Vengeance.

Some of his other known acting credits include Narcos and Logan. Similarly, he has appeared in movies and TV shows like Milk, Out of the Furnace, Run All Night, A Walk Among the Tombstones, Gone Girl, Hatfields & McCoys, In the Shadow of the Moon, The Predator, and Vengeance.

Holbrook is presently in a blissful marital relationship with his longtime wife, Tatiana Pajkovic. As per reports, the Indiana Jones 5 star met his future wife in 2016, and they ultimately started dating once they had a good understanding of one another.

Two years into their romance, in 2018, they reportedly exchanged wedding vows. Despite being married, they have kept every aspect of their wedding and marital relationship a secret and are yet to share their wedding photos.

Speaking more generally about their relationship, 2018 was a significant year for them as they got married and welcomed their son. On January 15, 2018, Pajkovic gave birth to her first child, a son named Leon Day Holbrook, who is typically referred to as Day Holbrook.

The married pair have been enjoying their time as parents since the birth of their baby, as seen in the photos they have published on their individual Instagram accounts. However, the actor has removed almost all of his posts from his Instagram account for reasons that are now unknown.

But rest assured, everything’s fine between the couple, as those pictures are still available on Pajkovic’s Instagram feed. Besides, Holbrook has given credits to his wife for 95% of the parenting skills he possesses.

In a September 2019 interview with People, the presenter noted that his wife is Danish and that Denmark is among the happiest nations in the world, which is linked to effective parenting.

The hosts then questioned him about parenting lessons his wife had imparted to him. He responded, “Oh my gosh. She probably taught me 95% of everything I know about parenting, in my opinion. My wife is wonderful.”

As of this writing, the married couple is still together, and their relationship is going on strong. Pajkovic recently posted a family picture on the occasion of New Year’s Day 2022. In the photo, the actor was seen carrying his son on his shoulders.

Who is Boyd Holbrook’s wife?

Pajkovic is a talented Danish actress and singer who rose to recognition primarily through her marital relationship with Holbrook.

She has only four acting credits to her name, which are for the films Nynne, Det vildeste westen, The Transporter Refueled, and Devil Town.

Pajkovic celebrates her birthday every year on January 25. She was born in Copenhagen, Denmark. Since her birth year is unclear, it is now impossible to determine her actual age.

According to her IMDb page, her father is an actor from Montenegro named Dragomir Pajkovic. Not much is known when it comes to her mother and whether or not she has any siblings. Furthermore, she studied both pianos and mixed martial arts when she was younger.

Holbrook had a few dating relationships and was even engaged once before getting married to his current wife.

According to sources, his first relationship was with Dominican model Omahyra Mota. They started dating in 2002 and broke up three years later in 2005. After that, from 2007 to 2009, he was romantically involved with Canadian model Julis Dunstall.

Then in 2012, while working on the set of their film, Very Good Girls, he ran across the actress Elizabeth Olsen. Around the same time, they started getting close and began dating.

After being in a dating relationship for two years, they took the next step and got engaged on March 13, 2014. In contrast to their love, their engagement was short-lived, as they split up on January 19, 2015, less than a year after being engaged.

After the failed engagement, the actor began dating the French actress Laure de Clermont-Tonnerre in 2015. They spent a brief time together before breaking up. Prior to meeting his future wife in 2016, Holbrook dated Maika Monroe for a period.