In 2009, Matthew Goode and Sophie Dymoke became parents for the first time. 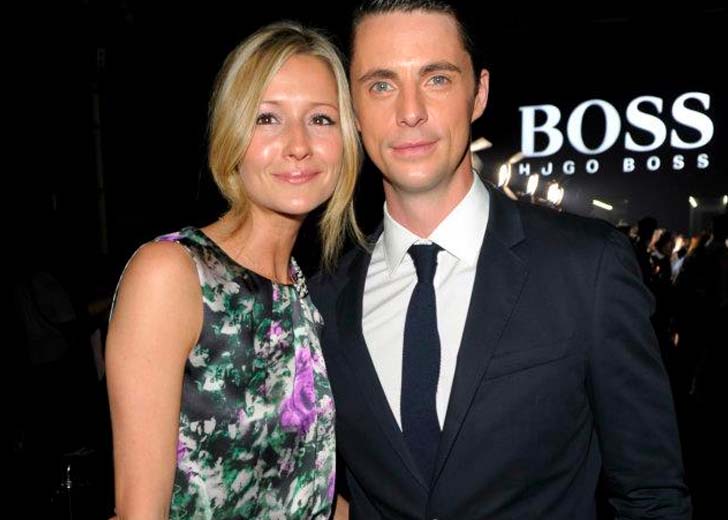 Matthew Goode has been quite successful in his journey as an actor, playing several roles that have given him fame. He is now set to portray the role of King Sigismund in the upcoming movie Medieval, releasing on September 9, 2022.

The English actor initially got a breakthrough via 2004’s Chasing Liberty. He later gained fame with his performance in movies and TV shows like Brideshead Revisited, Watchmen, The Imitation Game, The Good Wife, Downton Abbey, The Crown, A Discovery of Witches, and The Offer.

For his role as a guest actor in The Crown, he was nominated for one Primetime Emmy Award and two Gold Derby TV Awards. Additionally, he has been nominated for multiple other awards for his performance in his other acting gigs.

Coming over to his personal life, Goode relishes an equally blissful marital relationship with his longtime girlfriend turned wife, Sophie Dymoke — she is a fashion designer.

Goode first met his future wife, Dymoke, sometime in the mid-2000s. Recalling his first meeting with Dymoke, he told Metro.co.uk, “I was living in Clapham and she was on my doorstep when I came home. Literally. I thought: ‘[expletive] hell!’ She was a friend of my neighbour.”

They eventually connected and began dating in 2005. At that time, the actor had just gained fame, and everything was new-new to him. As they continued to be an item, they faced multiple ups and downs but remained firm and faced it together.

Almost a decade after they began dating, Goode and Dymoke decided it was time to settle legally. In 2014, the couple walked down the wedding aisle with several friends and family members joining to witness the ceremony.

However, there haven’t been many revelations about their wedding details as both tend to keep things private regarding their marital relationship. Due to the same reason, there is only a little information about their dating life.

Nonetheless, they seem to like the limelight occasionally as the married couple often attend several events, award shows, film premieres, and so on.

Matthew Goode and Sophie Dymoke are parents to three

Goode and Dymoke have been a great husband and wife duo over the years. But they are also excellent parents to their three children.

Besides, the two had welcomed two of their three kids before sharing the wedding vows. On March 1, 2009, Goode and Dymoke became parents for the first time when they welcomed a daughter named Matilda Eve Goode.

In September 2013, the Goode family extended again when Dymoke gave birth to their second child, another daughter named Teddie Eleanor Rose Goode. And in August 2015, they welcomed their third child, a son named Ralph Goode.

Like their marital relationship, Goode and Dymoke haven’t been much talkative about their children and prefer to keep them away from their limelight. To date, only their eldest and middle children have been spotted in public, while the youngest one is still kept away from the public eye.

Nonetheless, there have been a few times where the actor has talked about his kids and family. For instance, during his interview with USA Today in November 2014, he said, “Since becoming a father, I’ve become less selfish. I can’t just disappear to make a movie.”

“I have to have consideration for the family. I have no time to get into trouble. Otherwise, no one is picking up the children from school,” he added.

Similarly, when Radio Times asked him if he and his wife are strict about their kids spending more time online, he said, “We’re relaxed about the kids spending time on iPads, although I want to say, ‘Just watch some normal television, for the love of god!’”

He continued, “I don’t think they should have access to TV whenever they want, carte blanche – but I watched a hefty hourage of TV when I was a kid and I thoroughly enjoyed it.”

Furthermore, Goode opened up about his work-life balance during his interview with Red Online in 2018. He said, “I have three children and a lovely wife and I just don’t like being away from them. Of course, needs must occasionally.”

“But I’m very lucky. I’ve been able to mix work and family. When the kids go to school, I go fishing. Sophie used to ride a lot when she was a child and she recently got back into that. So we have a bit of fun on the side,” he added.

Most recently, in July 2022, the actor appeared on This Morning, where co-presenters Alison Hammond and Dermot O’Leary asked him about what was next for him. In reply, Goode revealed that he would have quality time with his loved ones.

Additionally, he said that he was about to go on a holiday with his wife and children to Greece, and if he weren’t with his family, he would typically be working.