"You are the most patient, loving, generous partner," Meredith Garretson says of her husband. 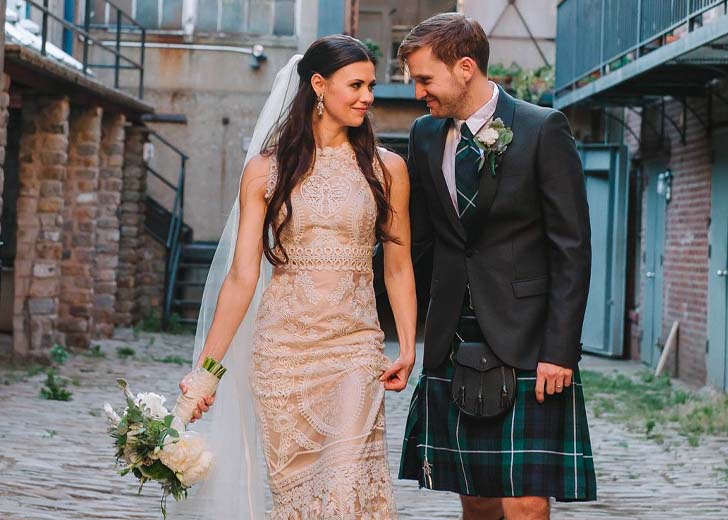 Meredith Garretson is a talented American actress best known for her performance as Kate Hawthorne in Resident Alien. She has been a part of the show’s two seasons – season 2 is currently streaming on Syfy – and will probably appear in season 3, which was renewed in July 2022.

In addition, she has gained fame for her portrayal of Ali MacGraw in the TV mini-series The Offer. Her other movies and TV shows include Two-Bit Taj Mahal, The Good Fight, Elementary, Fosse/Verdon, Prodigal Son, and She Watches from the Woods.

Meredith Garretson is married to her husband

If you think Garretson is the actress’s surname by birth, you are wrong, as she has taken her boyfriend-turned-husband’s last name after marriage. And her husband is a photographer named Daniel Garretson.

As of this writing, it remains unknown when and how the married couple first met each other. However, it isn’t a secret that they have been together for a long time. And we can say that because they have already been married for over six years.

On June 26, 2016, Meredith and Daniel walked down the wedding aisle after a brief period of dating. The details of their wedding, including the location and guests, are currently unknown.

Since they tied the knots, their bond has become stronger. Neither of them has left out each other in hard times, and they have been there through thick and thin.

Meredith Garretson and Daniel Garretson have immense love for each other

Meredith and Daniel’s love for each other is as high as the sky, and it could even be said that the actress greatly admires her husband. And all of these things could easily be witnessed through their respective Instagram handles.

For instance, on 2019 Valentine’s Day, Daniel took to his Instagram handle to share a picture with his wife and write a sweet caption. He wrote, “I love you @meredithgarretson I love that you challenge the status quo. I love your devotion to doing no harm.”

“I love your dedication to your art, and I love that it will always bring you joy and success. You’re my favorite human, my favorite woman, my favorite friend. I look forward to waking up next to you each morning and growing through the days in search of living. You live the way we all should live. You’re my forevertine,” she added.

Similarly, on August 16, 2020, Meredith posted a picture of her husband and wrote a simple caption saying she married an “absolute legend.” And on their fifth wedding anniversary, on June 26, 2021, she shared a picture of them and wrote, “Five years today.”

More recently, she expressed her love for her life partner with a heartfelt caption on the occasion of Daniel’s birthday. A part of her caption read, “My lover’s house has a thousand rooms. Each one beautiful and sparkling and full of treasures. Each one warm and inviting.”

“Danny, you are the finest person I have ever known. You are the most patient, loving, generous partner. You continue to grow and evolve and make more space for yourself and for me. Thank you for continuing to choose me and for letting me be a part of your journey,” read another part.

At the end of the caption, Meredith mentioned that 2022 would be the best year of their lives, and she will see to that as he deserves nothing but the best.

Going by all that, it’s sure that the couple has developed a special bond over the years they have spent together. And as for children, Meredith and Daniel are yet to be parents, but as they head into seven years of their marital bond, the baby noises might not be that far.