Natalia told Teen Vogue that she is not looking for a serious relationship and focusing on her career growth. 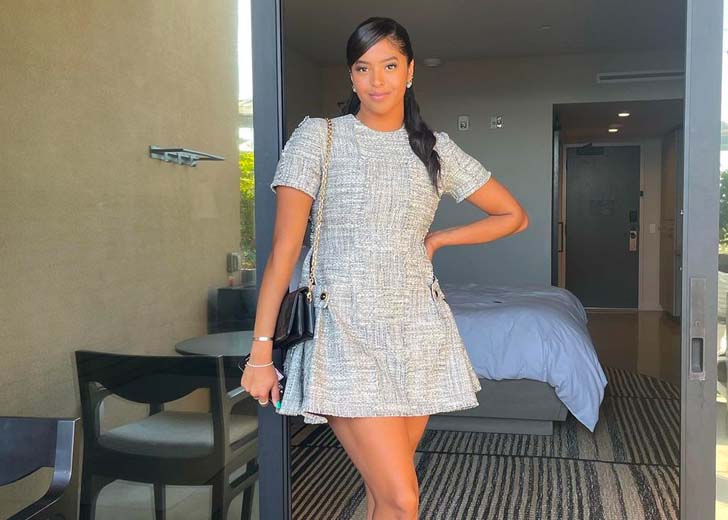 Natalia Bryant is well-known for being the daughter of late basketball legends Kobe Bryant and Venessa.

Her mother, Venessa, once took to Instagram to share a cute photo of her daughter with her prom date, fueling speculation that Natalia is dating.

Natalia recently completed her first year at the University of Southern California. The daughter of Kobe and Vanessa Bryant has been managing life as a student, rising model, and celebrity, and when she graduates, we can expect to see her in Hollywood pursuing big dreams.

She spoke to Entertainment Tonight earlier this month at the 2022 Vanity Fair Oscars Party and was all smiles as she talked about her life and Hollywood dreams.

We can not assume that Natalia’s prom date is her boyfriend by the sneak peeks of the prom on her mother’s Instagram story.

She attended the prom and shared her glamorous transformation with fans on Instagram. She shared a video of herself transforming from a casual to a stunning Dolce & Gabbana floral print dress.

Following the post, many of Natalia’s followers speculated that she was dating the boy in the photo. Vanessa’s 2019 Instagram post, in which she shared a photo of Natalia and Connor, suggests their friendship dates back a few years.

Although Natalia’s prom date Instagram story sparked interest in her love life recently, she is not publicly known to have a boyfriend to this date. Besides, she probably has other priorities besides getting into a relationship and having just graduated from high school.

Moreover, Natalia told Teen Vogue that she is not looking for a serious relationship. She doesn’t want to remember high school as the time she dated the guy she’ll regret next year. She also stated that she had some crush in her school but is sure she will not be dating anytime soon.

Natalia Bryant’s net worth: Her earnings and salary

Natalia’s net worth is currently unknown, but she has a bright future ahead of her that will undoubtedly earn her a large fortune. Natalia is 19 years old and recently graduated from high school at the University of Southern California. She is just starting her career as a model who recently signed a contract with IMG models.

Natalia Bryant wants to pursue her career in modeling. (Instagram)

Natalia aspires to follow in her late father’s footsteps. In a rare sit-down interview, the teen describes Kobe Bryant as her most excellent motivator and discusses their common interests. She credits her early interest in filmmaking to the NBA legend.

Furthermore, she is already an internet sensation, with 2.8 million Instagram followers. However, according to Forbes, her late father, the legendary Kobe Bryant, was estimated to have a fortune of 600 million dollars when he died in 2020. And Kobe’s worth has now been passed down to Natalia’s mother, Venessa Bryant.