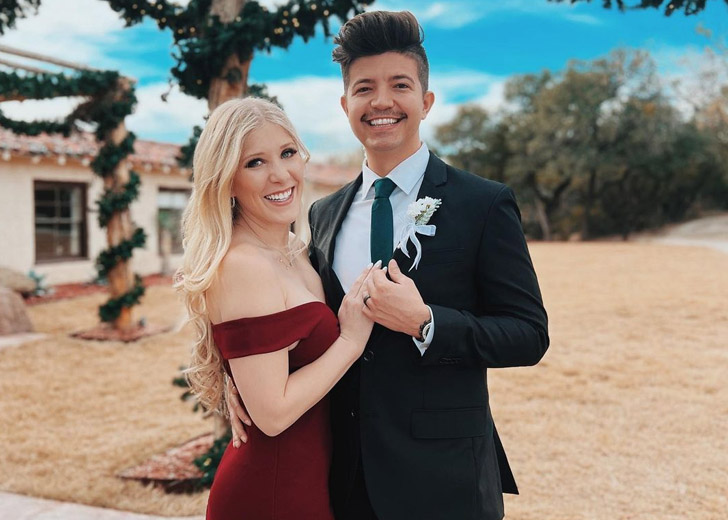 Preston Arsement, also known as PrestonPlayz, is a social media personality from the United States. He is well-known for his main YouTube channel, PrestonPlaz.

Preston began his career in 2010 by opening his own YouTube channels, TBNRfrags and PrestonPlayz. He streams games such as Among Us, Minecraft, and Fortnite with his famous gaming friends JeromeASF, BajanCanadian, and Noochm.

In addition to Youtube, Preston is active on other social media platforms such as Instagram, TikTok, and Twitter. Many of Preston’s fans are curious about his personal life due to his rising popularity.

Preston and Brianna Arsement have been married for nearly five years. (Source: Instagram)

The Youtuber and Brianna dated for a while before getting engaged in October 2017. They later married in late May 2018 in Dallas Union Station. Preston also posted their wedding video on his main youtube channel PrestonPlaz in 2018 with the title ‘I GOT MARRIED! PrestonPlayz Wedding Vlog.’

As of 2022, the love bird has been together for five years, with complete love and trust. Brianna posted a photo of them posing in the city on October 25, 2022, with the caption, “5 years ago today he got down on one knee, and I said YES! This made us the happiest we’ve been. Cheers to many more years and adventures to come.”

Moreover, Brianna supports her husband’s online endeavors and credits him for introducing her to the world of YouTube. She frequently appeared on Preston’s channel and started her own YouTube channel, which has 8.42 million followers as of 2022.

The content creators, Mr. and Mrs. Arsement, are only 28 years old but have 11 YouTube channels. Similarly, the pair collaborates to manage their 360-degree business, including a new Dallas coffee shop, real estate, and brand deals.

They have 35 employees and an office team focusing on video editing, thumbnail creation, and other online components.

According to the official blog of YouTube, when Brianna was asked how she manages all of her businesses simultaneously, she responded, “I am the kind of person; if I start to do something, I go all in. I do not want to do it half, so I really had to make the decision to devote all my time and energy into this to make a video as high quality as I want.”

Furthermore, the duo was asked what motivated them to work on a project together; they responded that they wanted to demonstrate the power of a robust and happy relationship with others. Additionally, they consider it a huge blessing to work together every day.