All about Rachel Aust relationship with her boyfriend Mitchell Black. 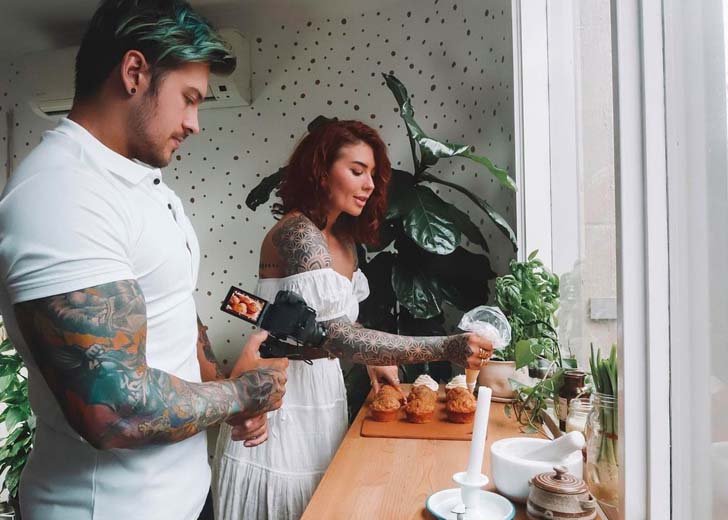 Nutritionist Rachel Aust enjoys getting beautiful tattoos done on her body. She is also a health coach and personal trainer.

Aust has a YouTube channel where she discusses her personal life, travels, and tattoos and has over 700,000 subscribers.

She has compiled much stress-relieving living advice, zero-waste suggestions, and other helpful techniques on her official website.

The health coach who adores tattoos fell in love with a man with similar interests.

Aust’s boyfriend, Mitchell Black, is the lead guitarist of the rock/metal band. The band consists of himself, singer and rhythm guitarist Terence Stevens, drummer Beau Grech and bassist Christian Centofanti.

The group of four is based out of Melbourne, Australia, that delivers rock, metal, or alternative music. They also sell their band’s merchandise.

On September 16, 2022, the band is set to perform their new single ‘Tabula Rasa’ at The Tote Hotel, Melbourne.

Black is a fitness freak, just like her girlfriend Aust. Both can be seen sharing their fitness tips via their Instagram accounts.

However, not much information is available regarding their first meeting or how they fell in love, but Aust revealed that they had been together for almost two years via an Instagram post in 2019.

Therefore, it seems that Aust and Black started dating sometime around 2017. She shared a picture with Black and captioned the photo, “Alright, we have been together for almost two years and I still don’t know how his teeth are so damn white.”

Is Rachel Aust and Mitchell Black still together?

The couple is still together. Just a day ago, on September 5, 2022, Aust uploaded a recipe video on her Instagram, and her boyfriend can be seen commenting, “looks delicious.”

Furthermore, Black continues to appear in Aust’s YouTube videos. On January 16, 2020, Aust did a Q&A video titled, ‘big life updates’ where she revealed that the pair had moved together into a new house.

A follower asked, “Have you moved house yet?” Aust replied with “yes,” Black joined her and responded, “new home.” The duo initially wanted to hire removalists to move their stuff but did it themselves.

She further described the process of moving from her old home to her new one. The couple can be seen organizing their belongings in their new home in the video “moving into our house.”

They have been dating for over five years and still have a lot in common, such as their passion for staying healthy and active. As a result, their relationship is stronger than ever.

In addition to enjoying the gym, Aust and Black also like getting their bodies tattooed. Both of them have incredible artwork and tattoos on their hands.

On June 2, 2022, Aust announced on her YouTube video that she was getting a new tattoo on the inside of her ear. Her most recent ink is an ear tattoo in the shape of a feather.

Additionally, she has a stunning neck-to-waist tattoo. She described her back tattoo as a robot bird shooting a laser beam out of its beak via her Instagram.