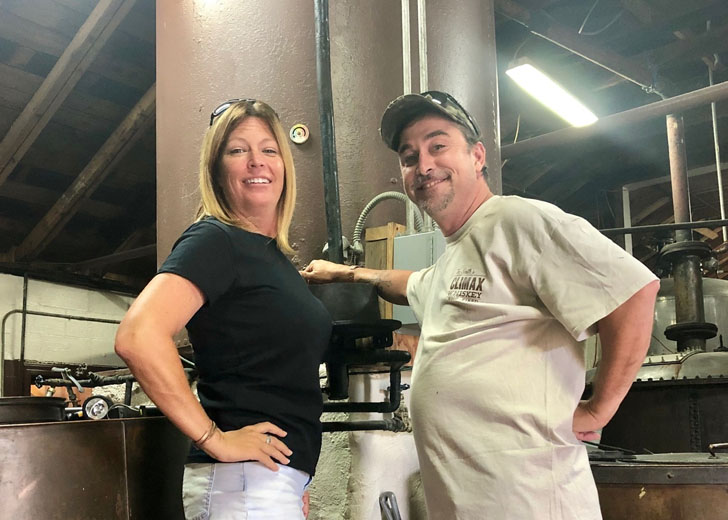 American television personality Steven Ray Tickle is well-known for his parts in the Moonshiners and Tickle docudramas on the Discovery Channel.

In 2013, the American docudrama television program Moonshiners, which aired on the Discovery Channel, thrust Tickle into the spotlight.

The popularity of this program, as well as his own, led to the production of the sequel Tickle, which was also broadcast on Discovery Channel. And thanks to his works, the reality television star has accumulated a healthy net worth of $300,000.

Who is Steven Ray Tickle married to?

Coming over to his personal life, Steven has been married to his beloved wife, Carol Tickle (nee. Ann), for a couple of years. Carol, a bail bondswoman and realtor, is reported to have pursued her future husband for six years until Steven finally relented and went out with her.

The married couple shared the wedding vows on Saturday, October 19, 2019. The theme of their wedding was moonshine, and several fellow Moonshiners like Tim Smith, Henry and Kenny Law, and Howie were there to attend the special day.

After the wedding, Steven told Discovery, “The only thing I had to have was Carol; nothing else mattered as long as Carol was there.”

Since they married, the love birds have been supportive and have a great deal of love for each other, which was also seen during the duo’s exclusive interview with Discovery in February 2022. In the interview, Steven and Carol shared updates on their marital relationship and how they have been doing.

The Q&A interview started with a simple question about how long they had been together. Steven’s reply was simple as he said they had been married for over two years. But when Carol laughingly said, “103 years,” Steven replied, “I don’t think it’s quite been 103 years. It has felt like it some days.”

As the fun interview went on, the couple expressed their favorite part about each other and how they had a fun date night. In the end, Carol was asked what’s her favorite thing about being Steven’s husband, to which she said, “My favorite thing is traveling with him. We’ve gone to a lot of places since we’ve gotten married.”

Similarly, Steven was asked what’s his favorite thing about being Carol’s husband. And he said, “She completes me. For years, I struggled; I could never find my way. I was in and out of jail. I just couldn’t seem to act right. She gives me a reason to act right. Really a reason to stand up and be the man that I am today.”

Going by all that, it could only be said that Steven and Carol’s relationship is going strong, and they will be together for a long haul. Steven could be seen giving regular updates on his daily life through his Facebook account, where he frequently posts pictures with his wife and sends her lovely birthday wishes.

Who was Steven Ray Tickle married to in the past?

Years before tying the knots with Carol, Steven was married to another woman whose identity isn’t known. Although the identity of Steven’s first wife is unknown, it’s known that he shares a child with her. Steven is a father to a daughter named Daisy Tickle — she was born in 2000.

Steven has been very serious about his personal life as he hasn’t shared more details about his first wife and has been quiet about this topic since the beginning.

Despite being able to keep much of his life private, he was unable to keep some details a secret. Steven has a criminal history stemming from two arrests. His first was for public drunkenness in 2015. This didn’t cause much controversy, and he was discreetly released later that day.

His second arrest received a lot more media coverage and ultimately resulted in jail time. A sawn-off shotgun was discovered in his car’s backseat during a routine traffic stop on February 1, 2016, leading to his arrest for weapons possession.