"Being a girl dad is the best," Justin Simmons says after being a father of two daughters. 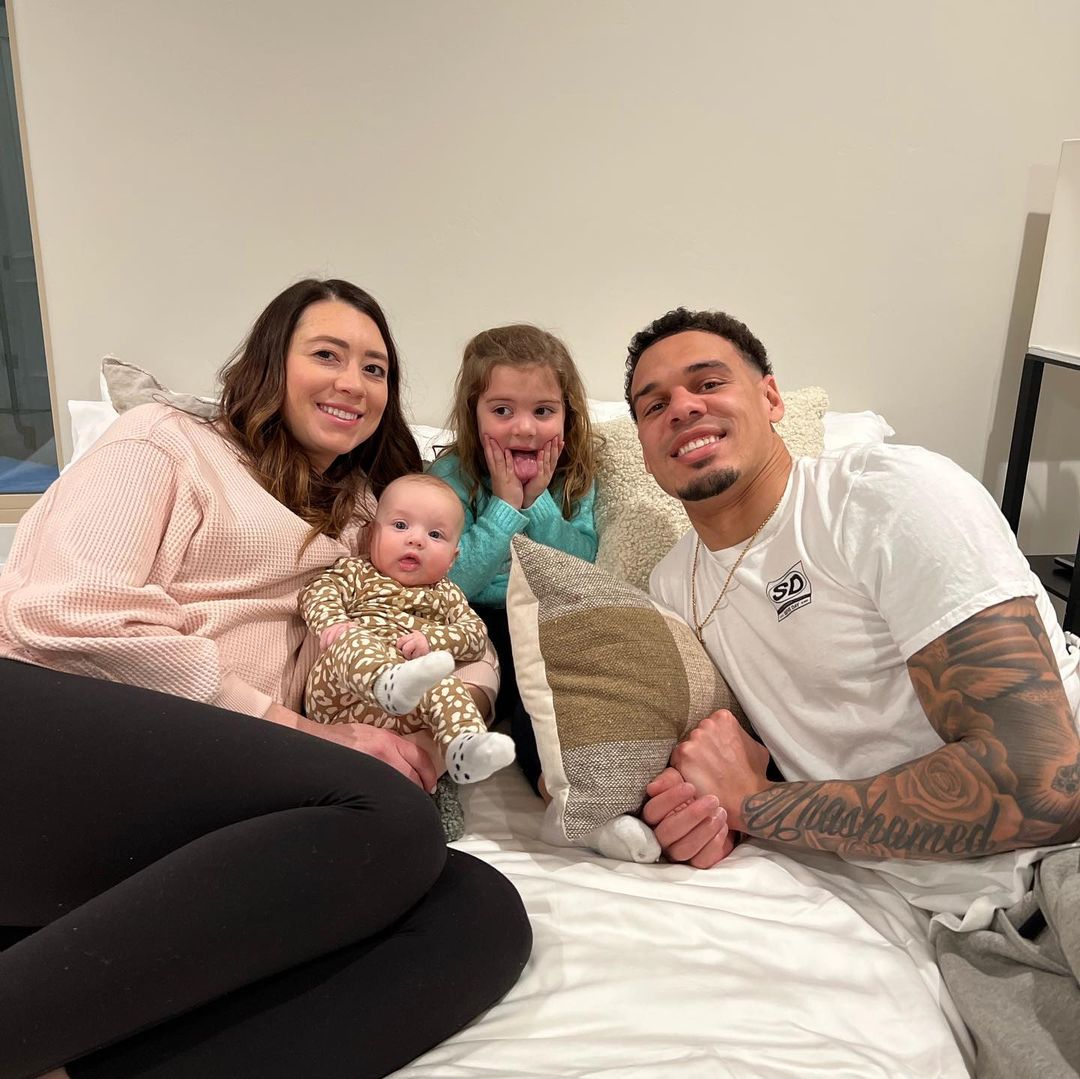 Justin Simmons has achieved a lot of success in a short period, all thanks to his hard work and dedication.

The talented American football free safety has been signed with the Denver Broncos ever since the National Football League team drafted him in the third round of the 2016 NFL Draft. Previously, he played college football at Boston College.

While his professional life is full of success, his personal life happiness is what matters the most to him. Simmons has been in a blissful marital relationship with his longtime wife, Taryn Simmons (nee Richard). Besides, he shares two adorable daughters with his wife.

The happily married couple of Justin and Taryn’s relationship dates way back to their high school days at Martin County High School, where they first met each other and eventually began dating.

Their relationship timeline on Taryn’s Instagram handles dates back to January 3, 2012, on which she made her first-ever Instagram post featuring her future husband. Since they began dating, the duo has always stayed together no matter what.

After dating each other for years, Justin finally went down on one knee and proposed to Taryn on June 6, 2015. She said yes, and they got engaged. On that same day, Taryn showed her excitement to be Justin’s future wife via an engagement announcement post on Instagram.

She had shared a picture of Justin on his knees as he proposed to her. Captioning her post, she wrote, “WE’RE GETTING MARRIED. I’m so excited to become Mrs. Justin Simmons. I love you forever & always.”

Less than a year later, on April 2, 2016, the engaged couple walked down the aisle and shared the wedding vows. A day after their wedding, Justin took to his Instagram handle to post a lovely wedding picture alongside his wife.

In the caption, he thanked everyone who had joined him and Taryn for their big day. He also thanked Taryn for being his amazing wife. Similarly, Taryn had also dedicated a post for her husband.

The married duo has since relished every moment they spent alongside each other – now as a husband and wife duo. Taryn has been very supportive of Justin’s career since the start and accompanies her at several public events.

Both of their Instagram handles are filled with pictures of each other, clearly showing their love. Going by all of that, it shouldn’t be that hard to say that Justin and Taryn are perfect for each other and might just be made for each other.

Over a year after tying the knots, on November 1, 2017, Justin and Taryn made separate posts on their respective Instagram handles to announce that they were expecting their first child.

“What an amazing step we are taking in growing our little family! Such a huge blessing. Expecting baby Simmons sometime in May,” Justin captioned his post. On November 29, Justin made another post revealing that he would be a father of a baby girl.

On May 11, 2018, the couple welcomed their first daughter and named her Laney Rae Simmons. Both Justin and Taryn announced the birth of their child via their respective Instagram handles.

On the occasion of the couple’s fifth wedding anniversary, they announced that they were expecting their second child. On May 11, 2021, Justin revealed that his second child is also a girl.

On October 26, the football player announced that his wife gave birth to their second daughter named Shae Simmons. Posting a picture of his second baby girl, he wrote, “God is so good. What a blessing you are Shae…our miracle baby.”

Two days later, in an interview, he mentioned that being a girl dad is the best thing. As he went on, he said that though he always loved his daughter Laney, he started to appreciate being a father to a girl thanks to his childhood idol, late Kobe Bryant, who had five daughters.

He said, “I loved my daughter before the unfortunate passing of Kobe. But then I think just diving into his perspective — you know, people were asking him ‘well what about a boy?'”

Bryant, who didn’t have a son, was always proud of his daughters and passed them his love and passion for basketball. Thus, Justin was inspired by that and realized how special a father-daughter bond is.

“There’s something about investing as a dad, as a man, into your daughter’s life that is just such a special bond. It’s something that is so sacred,” he added.

Justin Simmons with his wife, Taryn Simmons, and their daughters (Photo: Instagram)

Ending the interview, he stated that he is blessed beyond measure now that he is a father to little girls, he is just thankful, and he hopes that they can be half the woman that their mother, his wife, is and that they will be okay.

Since the birth of their two little bundles of joy, the married couple has been busy flaunting multiple pictures alongside them on their social media handles.

The family of four recently celebrated Christmas together seemed very happy. To conclude, Justin and Taryn’s marital life seem to have been blessed with more happiness after they welcomed their daughters. We wish the family nothing but the best.