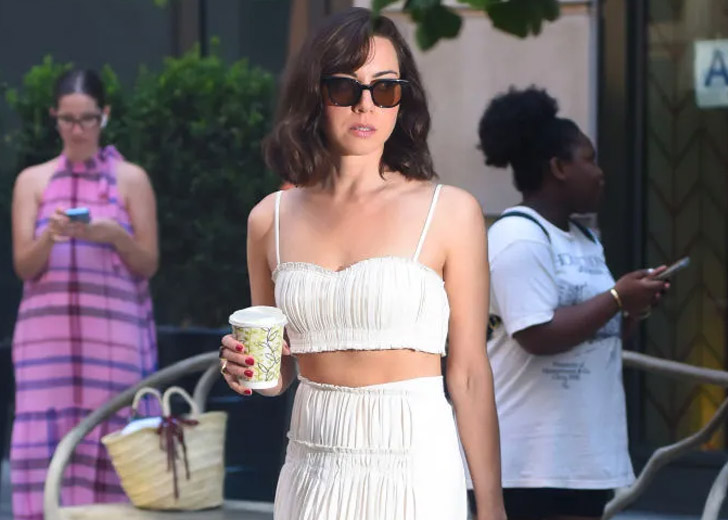 American actress and comedian Aubrey Plaza is best known for portraying the role of April Ludgate in the TV series Parks and Recreation from 2009 to 2015. She began her acting career at the Upright Citizens Brigade Theater, where she performed improv and sketch comedy.

Later in 2012, she landed her first leading role in the film Safety Not Guaranteed. Afterward, Plaza appeared in films including Mystery Team, Funny People, Scott Pilgrim vs. the World, The To Do List, and Life After Beth. In addition to acting, she produced and starred in the independent film Black Bear in 2020.

In 2022, she appeared in the second season of HBO’s anthology series The White Lotus. In the series, she plays Harper, a woman who agrees to go on a luxury Sicily vacation with her husband. Plaza also received a Golden Globe Award nomination for her role in The White Lotus.

Plaza smoked marijuana with two Sisters of the Valley in a Cut.com YouTube video promoting her new raunchy comedy film The Little Hours. The trio talked deeply about religion and drugs while smoking weed from the Sisters’ stash.

During the video, one of the nun sisters stated, “The reason we grow weed is to support ourselves and also to create honorable spiritual jobs for women.” Moreover, Plaza was seen smoking on numerous occasions. After the video and photos, many of the actress’s fans assumed she smoked in real life.

In a thread on Tumblr, an anonymous user asked others about Plaza’s smoking habit, to which one responded, “I’ve seen a few pictures of her smoking tobacco, but I don’t know if she smokes it regularly.” The same user also thought that Plaza smokes weed more regularly.

Plaza has an estimated net worth of $8 million. Her acting career is her primary source of income. She has been in the entertainment industry for over a decade and is living well.

Apart from the acting career, Plaza wrote a children’s book, The Legend of the Christmas Witch, with co-author Dan Murphy and illustrator Julia Iredale, published in 2021. She might therefore receive extra money from her writing.

Regarding the actress’s real estate, she paid $1.6 million in July 2016 for a home in the Hollywood Hills. Later, she put the house up for sale in August 2022 for $2.25 million, and within a few weeks, she found a buyer who paid nearly the total asking price. Likewise, Plaza paid $4.7 million in October 2022 for a different home in the Hollywood Hills.

Plaza unquestionably has an average height in the entertainment industry. She is 5 feet 6 inches or 1.68 meters tall and weighs around 54 kg or 119 lbs.

Aubrey Plaza has a perfect body, which draws many of her fans. (Photo: Instagram)

The actress has the ideal height and weight, and Plaza works out frequently to keep her body in shape. Similarly, she begins her day with water and smoothies to provide her body with what it requires. She also drinks herbal teas between shoots to stay energized throughout the day.