Bella Heathcote has been married to her husband since January 2019. 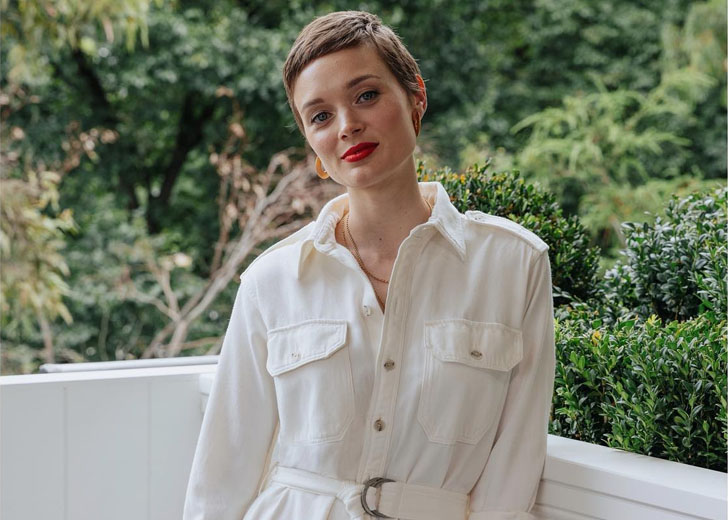 Bella Heathcote is one of the rising actresses in the entertainment industry. She first tasted the limelight for her performance as Amanda Fowler in the television show named Neighbours.

After that, some of her major appearances in movies and TV shows include Dark Shadows, Pride and Prejudice and Zombies, The Neon Demon, Fifty Shades Darker, The Man in the High Castle, Strange Angel, and Bloom.

She is currently in the spotlight for her amazing performance in the TV show Pieces of Her. In the Netflix thriller show, she portrays the role of Andy Oliver and stars alongside Jessica Barden, Joe Dempsie, Toni Collette, and others.

How old is Bella Heathcote?

Heathcote is 34 years of age, as of this writing. She celebrates her birthday on the 27th of May every year.

The actress celebrated her 34th birthday in a small fashion with a couple of her close friends. On that special day, she posted a picture of herself hiding her face with her hands while a candle was lit up in a small piece of cake.

Born in 1987, she was raised in the city of Melbourne, Victoria, Australia. Her birth name is Isabella Heathcote, and her zodiac sign is Gemini.

For her education, she initially attended Korowa Anglican Girls’ School, an independent day school for girls. Later, she enrolled at the Australia National Theatre Drama School. In 2010, she was awarded the Heath Ledger Scholarship.

Bella Heathcote’s father was initially against her acting

The Australian actress’ father’s name is Robert Heathcote. As for his profession, he is a lawyer.

During an interview with LA Times, Bella had mentioned that her father was initially against her leaving Australia and going to Hollywood to pursue a career in acting. Besides, before her venture in acting, she was working at her father’s firm – as a paralegal – to placate him.

She said, “He [her father] spent a few years being like, ‘Yeah, that’s great. You can do acting after you go to university and get a degree. Once you figure out your backup plan, you can go and be an actor.'”

“And then I did one year and just dropped out. I was like, ‘Ugh, I’m gonna kill myself,'” she further added.

Apart from her father, she used to have three more members in her family – mother and two brothers named Sammy Kingsley and Andrew. Unfortunately, her mother and Andrew are no longer in this world.

Now, she only has her father as her parents and her brother.

How tall is Bella Heathcote?

One could say that Heathcote has an average height. Reports suggest that she stands at the height of 5 feet 6 inches or 1.68 meters.

Bella Heathcote is a married woman

Heathcote is a notoriously private person when it comes to her personal life. So, when she revealed that she was a married woman and had a husband, many were left in shock.

On January 18, 2020, the actress took to her Instagram handle to reveal one of the biggest secrets of her life — that she has a husband. But that wasn’t it as she told the secret on the occasion of her first wedding anniversary.

Shocking, right? She had shared a cute picture with her partner and wrote a sweet caption. At the end of it, she thanked her husband for marrying her.

Bella Heathcote alongside her husband in Berghotel Obersteinberg (Photo: Instagram)

Heathcote’s Instagram post revealed that she had been married to an architect named Richard Stampton. They tied the knots on January 18, 2019.

It’s currently undisclosed when and where the couple first met each other. It’s also unknown how long they were dating before tying the knots. Heathcote had only started featuring her beau on Instagram around a year before her shocking marriage announcement.

Many people believed that Stampton was her boyfriend only. But, the whole situation has been changed now that they are married. Since revealing her marriage, she has made occasional posts with her husband and hasn’t shared much about her married life.

Before this marital relationship with Stampton, she was engaged to filmmaker Andrew Dominik. In March 2017, Heathcote’s rep confirmed her engagement to Dominik with The Knot.

The outlet further reported that they had been dating for seven years before taking their relationship to a new level. However, after that, no further updates have been found about the formerly engaged duo – due to their privacy.

Later, in September 2018, split rumors originated after the actress stopped wearing her engagement ring. Eventually, it was confirmed that they had called off their engagement. The reason behind their breakup remains undisclosed.

Many people on the internet have mentioned that Heathcote looks like American actress Heather Graham due to the similarities in their appearance – even though Heathcote is 18 years younger than Graham.

In one discussion chat of MovieChat Forums – purely dedicated to this discussion – one user had written, “I also seriously thought she was Heather Graham when I first saw Dark Shadows. They look exactly alike!”

Another user chimed in and said that the two have the same facial expression and eyes.

Furthermore, one user agreed with the previous comments and wrote that Heathcote is Graham’s younger and skinny version.

What do you think of these comments? Do they look alike?