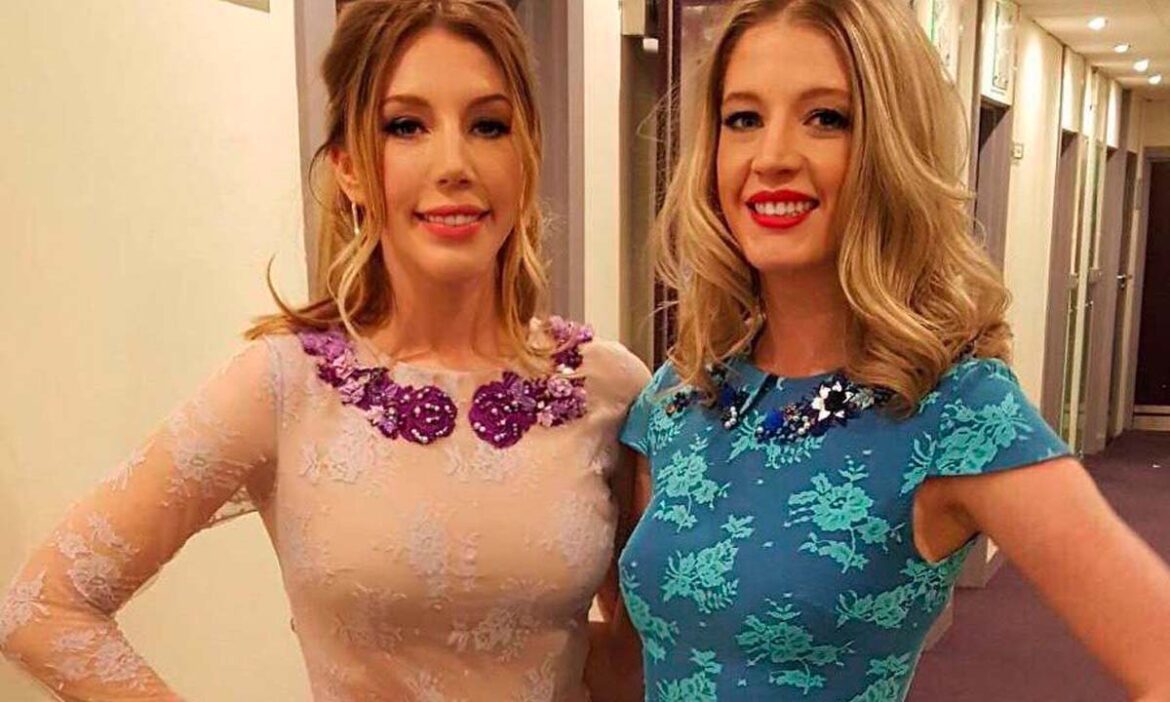 Canadian comedian and TV personality Katherine Ryan is well-known for her appearance at BBC’s Live at the Apollo and her fictional BBC Show, The Duchess.

Ryan has appeared on numerous British panel shows, including 8 Out of 10 Cats, Never Mind the Buzzcocks, A League of Their Own, Mock the Week, WSafeword, and many others.

She has been in the entertainment industry for decades, so she has gained a lot of popularity, and many of her fans are interested in learning more about her family.

Katherine Ryan grew up with her two sisters

Ryan was born to Finbar, a draughtsman and the owner of an engineering firm who emigrated from Ireland to Canada. And her mother, Julie McCarthy, is British-Canadian and owns an IT consulting firm.

Similarly, she grew up in Sarnia, Ontario, with her two younger sisters, Kerrie and Joanne. The three siblings spend most of their time with their paternal grandparents in Cork, Ireland.

In an interview with LBC, Ryan discussed her sister and how they supported one another from their early years. She stated that her mother gave her a small video camera when she was nine years old, and she used it to make sketches with her sister.

The television personality even dressed her sister as Hitler for a school project. Like Hitler, she planned to invade Belgium, Holland, and France. However, her teachers disagreed because he felt it was inappropriate for the school project.

Later, her parents divorced when she was a teen. “My parents had a tumultuous divorce,” she told the Irish Examiner. “In The Duchess, I was almost drawing on my own fantasy of how my parents could have handled themselves if they had put aside their differences.”

Katherine Ryan smiled as she posed with her younger sister Joanne. (Source: Instagram)

Ryan then decided to leave home and study city planning at Toronto Metropolitan University when she was 18. She worked at the restaurant chain Hooters while attending university.

Ryan also participated in open mic nights in her spare time as an alternative form of personal entertainment, and by graduation, she developed a basic comedic routine.

She eventually became a well-known comedian, and many of her best jokes are about her family life, particularly her 11-year-old daughter Violet, whom she gently mocks for having a plummy British accent that contrasts with her Canadian twang.

Ryan still misses her childhood even though she has started her own family. She shared the throwback photos from her childhood on Instagram stories in May 2021.

The comedian joked about her love of power suits and shared pictures of herself cuddling her two younger sisters. In another adorable photo, Ryan beams as she poses with her younger sister Joanne. She also shared a photo of herself as a child holding Kerrie as a newborn.

Ryan made her television debut in episodes of the Canadian music video review program Video on Trial from 2005 to 2008. After moving to England, she debuted in 2012 on Channel 4’s 8 Out of 10 Cats.

Katherine Ryan has been in the entertainment industry for over a decade. (Source: Twitter)

Later, on February 23, 2013, she appeared as Nicki Minaj, dancing to Starships as a celebrity contestant on BBC One’s Let’s Dance for Comic Relief.

Similarly, Ryan took over as the BBC Two presenter of Hair in 2015. She joined Tinie Tempah’s team on Sky 1’s music/comedy panel show Bring the Noise and ITV2’s Safeword the same year. In 2018, the television personality was named team captain of the American comedy panel show The Fix.

Aside from television shows, Ryan is also an actress. She appeared in several British television shows, including the sitcoms Campus, Episodes, and Badults. She also has a skincare brand named My Skin Boutique.