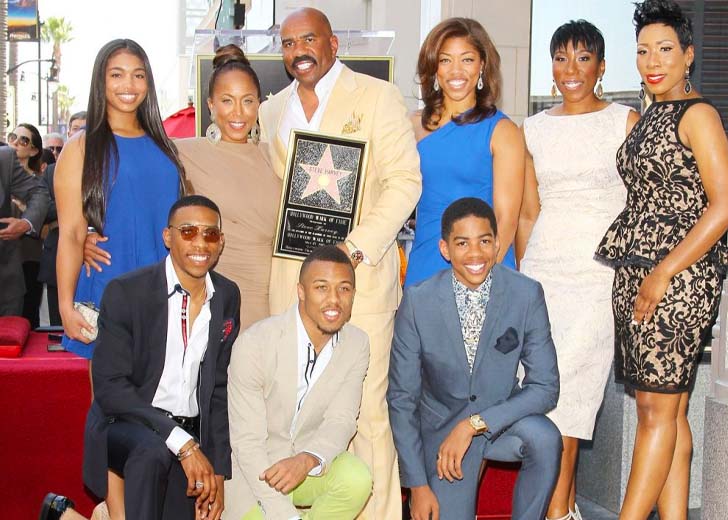 Lori Harvey is an American model who works for two of Europe’s top agencies, LA Models and Select Model Management. She is the stepdaughter of comedian Steve Harvey.

Lori was born on January 13, 1997, in the United States of America. Her mother, Marjorie Bridges, had a troubled life before marrying Steve. According to Radar Online, Bridges was previously married to drug lord Jim L. Townsend.

She was an avid equestrian while growing up in Atlanta, Georgia. Lori decided to focus solely on her modeling career after suffering a horseback riding accident in 2015.

As the stepdaughter of well-known actor and comedian Steve, the model has firsthand knowledge of what it takes to make it in the entertainment industry. Along with her stepfather, she also attributes her incredible fashion sense to her mother.

Moreover, Lori grew up with six siblings on her mother’s and stepfather’s side.

Brandi is one of Steve’s twins, whom he had with his first wife, Marcia. She was born on August 20, 1982. Her parents divorced when she was 12 years old in 1994. However, their separation did not deter her from growing successfully.

Brandi is a motivational speaker, author, and lifestyle coach as of 2022.

She has worked with various organizations, including Young, Fit and Fly and the Steve and Marjorie Harvey Foundation.

Similarly, Brandi is the author of Breakthrough Sold Separately. She is also the founder of Beyond Her, an active wellness brand for women of color.

Karli is the twin sister of Brandi, though it is not sure who is the oldest.

She is a multifaceted professional, Atlanta-based entrepreneur, magazine editor, host, and hairstylist like her sister.

She appeared in Steve Harvey and Black Love. Karli had a strained relationship with her father, Steve, because he had abandoned them after divorcing their mother.

But, they reconnected during her marriage to Benjamin Raymond in 2015. Even the entrepreneur’s father escorted her down the aisle.

Morgan is the daughter of Lori’s mother and Darnell Woods. She was born on June 1, 1985. She was passionate about cooking and decided to pursue her dream.

Later, she began a food blog, I Need Some Mo, where she shared food recipes and wrote a cookbook called Party Heart. Morgan also occasionally appeared on Steve’s shows to teach people how to cook.

Jason was born on August 27, 1991, to Bridges and Townsend. When he was a year old, his father was arrested for running an illegal drug business. Like his sister Lori, he was adopted by his stepfather Steve and has grown close to him.

Since childhood, he has been involved in the fashion industry and was inspired by his stepfather’s signature bright pinstripe suits.

As of 2022, Jason is a producer, designer, artist, and creative director. He and his business partner Erwin Sweetwine co-own the luxury footwear company Yevrah.

Broderick is Lori’s eldest brother. He was born on August 21, 1991, to Steve and his first wife, Marcia. He didn’t have a close relationship with his father, Steve, until he was 16 and moved in with him.

He established his own photography business, B. Harvey Photography Inc. In 2015, Broderick worked as a ticket coordinator for NuOpp Inc and co-founded Steps by Stephens with his friend Thabiti Stephens.

Wynton was born on July 18, 1997, to Steve and his second wife, Mary Lee Harvey. He was only eight years old when his parents divorced. Later, he moved in with his father and became very close to his stepmother and step-siblings.

At a young age, Wynton became interested in photography and has worked with top brands such as Saint Laurent and artists such as 2 Chainz and Bosco.