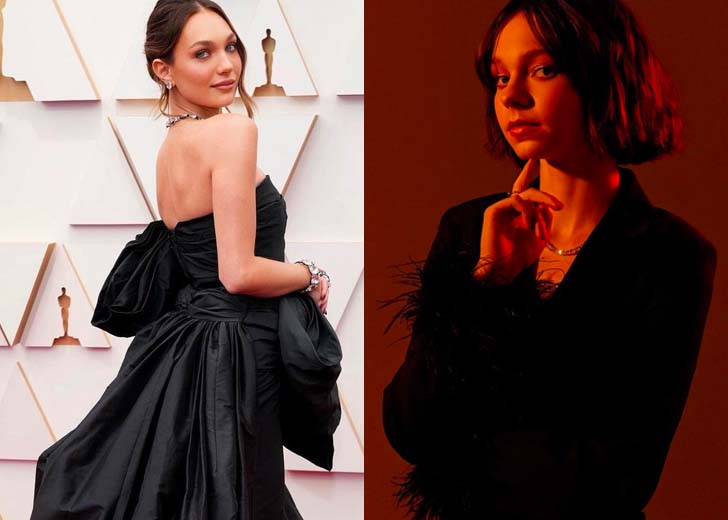 American actress Emma Myers is best known for her role as Enid Sinclair in Netflix’s Wednesday in 2022. As she grows in popularity, many of her fans have noticed that she resembles Maddie Ziegler.

Myers and Ziegler have a strong resemblance, especially in their faces. Many of their fans have wondered if the two actresses are related due to their striking resemblance.

One person wrote on Reddit, “Myers in Wednesday on Netflix is giving me Maddie in her Sia era vibes in this scene!”

Likewise, Myers’ fans shared a photo of her next to a picture of Ziegler and wrote, “Can’t explain it but Emma Myers looks like Maddie Ziegler do you see the vision.”

One person even said that they could even play the role of siblings.

Moreover, along with Ziegler, Myers was compared to Hunter Schafer. One social media user said the actress looks like a mix of Schafer and Ziegler.

No, Myers and Ziegler are not personally connected. However, they are professionally related because both of them are actresses.

Ziegler is a dancer and actress. She rose to prominence after appearing on the Lifetime reality show Dance Moms. She won numerous titles at regional, state, and national dance competitions, including the 2014 Dancers Choice Award for Favorite Dancer 17 & Under.

Likewise, Ziegler has appeared in music videos for artists such as Alexx Calise, Sia, and Todrick Hall. The actress made her film debut in The Fallout, a high school drama premiered at South by Southwest in March 2021. In addition, the film received the Grand Jury Prize in the Narrative Feature Film Competition.

Maddie Ziegler is an actress as well as a dancer. (Source: Twitter)

However, Myers and Ziegler have never shared a screen or television show. Jenna Ortega, Myer’s Wednesday co-star, has worked with Myers and Ziegler. Ortega co-starred with Ziegler in the HBO Max film The Fallout. In real life, she is friends with both actresses.

Emma Myers’ movies and TV shows: Details on her career

Myers began her professional career when she was eight years old. The actress made her film debut in 2010 with the film Letter to God, in which she played the character of Girls on a School Bus. The following year, she appeared as Paige Slayton in the TV series The Glade and as a Gym girl in the short film Crooked.

After working on three projects, it took her another nine years to appear on screen again. In 2019, Myers appeared in the short film Love, Innocence. Following that, in 2020, the promising actress landed roles in several movies and television shows, including A Taste of Christmas, Dead of Night, Deathless, and The Baker and the Beauty.

Likewise, as mentioned above, Myers gained wide recognition for playing Enid in the TV series Wednesday. Her role in the series helped her accept herself because, as a child, she was an introvert who struggled to socialize.

Moreover, the actress has a verified Instagram account with over 6 million followers. She continues to share her professional and personal life on her Instagram page. So far, Myers has shared photos of her teammates, friends, and sisters on Instagram. She also enjoys traveling and having adventures.