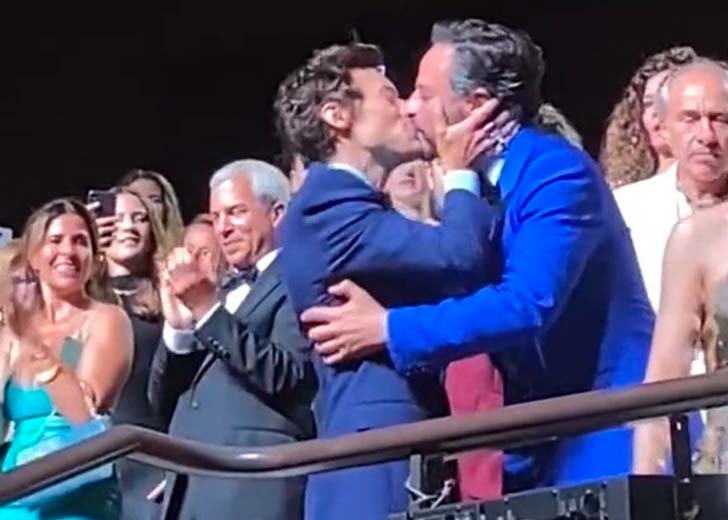 On September 5, 2022, Don’t Worry Darling had its world debut at the 79th Venice International Film Festival, and Harry Styles made headlines that evening after kissing Nick Kroll, one of his co-stars.

The thriller movie directed by Olivia Wilde garnered a lot of love and cheers during the Venice premiere, but fans can’t stop talking about the moment Styles and Kroll made out.

Wilde, alongside her lead cast members, was present at the Venice Film Festival for its premier last night.

Don’t Worry Darling, Wilde’s second film as a director, received a five-minute-long standing ovation at the Festival at the end of its screening.

The cast members were ecstatic, but it seems like Styles and Kroll were the ones who seemed the happiest after the movie received a standing ovation.

During the 5-minute standing ovation, the movie’s lead star, Styles, was seen locking lips with his co-star Kroll for a second and hugging each other happily.

In the 16-second clip, Styles made his way to Kroll, grabbed his face with both hands with Kroll’s hand on Styles’ waist, and made out.

As the two actors embraced each other, the shocked screams of the audience can be heard in the video.

On Monday, Pugh and Wilde were not captured alone but posed for group pictures with the rest of the film’s cast on the Festival’s red carpet.

Styles kissing Kroll is still a hot discussion among fans, and they can stop tweeting and sharing their thoughts about this kiss.

Many fans believed it was the best part of the evening, although some believed Styles may have been queerbaiting.

One of the fans wrote, “No Bullshit, No Conspiracy BS. Just Beauty of Harry & Nick kissing,” while another fan tweeted, “can’t believe harry styles queer proof is him kissing nick kroll like can we all be fr for a minute.”

Meanwhile, one of the tweets read, “Can’t believe harry styles is queerbaiting with Nick Kroll smh.”

Styles’ involvement in the incident sparked various reactions, from queerbaiting to simply supporting LGBTQ+ to some who thought he might genuinely be queer.

Harry Styles opens up about his sexuality

Styles’ sexuality has been a matter of discussion for fans over many years. He can be seen embracing gender fluidity through his fashion.

However, his approach has drawn criticism for being “queerbaiting,” or taking advantage of queer aesthetics without officially claiming the group.

Styles explained that everyone, including himself, has their journey with figuring out sexuality and being more comfortable with it when speaking about his part in the upcoming movie My Policeman.

He told Rolling Stone that My Policeman is not a “gay story,” instead, he pointed out the story is about love and wasted time.

Styles previously also discussed his sexuality and said, “For a long time, it felt like the only thing that was mine was my sex life,” to Better Homes & Gardens.