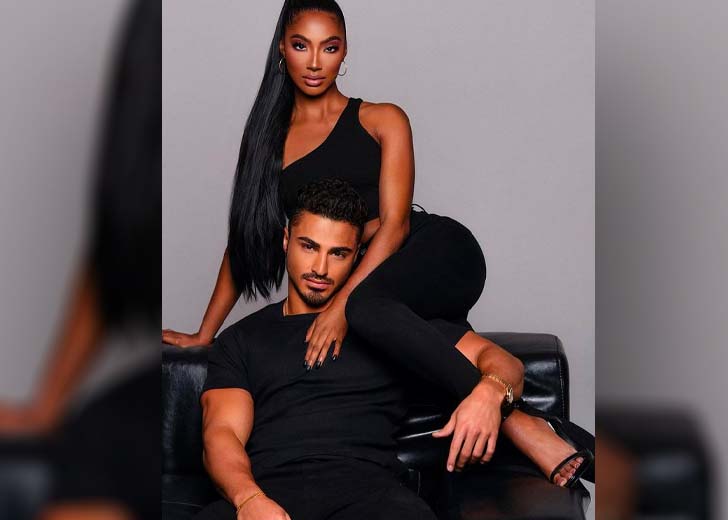 On December 2, 2022, to commemorate their one-month anniversary, the couple posted their iconic photo together with the caption “Mine.”

Hannah Chaddha commented on the post, calling them “the most attractive couple to ever come out of reality tv.”

On their anniversary, the couple did a photo shoot in which Hale looked lovingly at her beau while wearing a white tank top and denim cutoffs. Abdin was shirtless and wearing only jeans in the flirty photos.

It hasn’t been long since the couple confirmed their relationship, and they’ve already celebrated their First Monthsary.

The chemistry between Abdin and Hale began over the summer while they were both living in the Big Brother house together. The couple knew there was something special between them at the time, but they decided to wait until the show ended.

Later, in late August, Abdin was kicked off from the CBS reality series, and Hale was crowned the first Black woman winner.

According to Hale, her connection with Abdin has been undeniable, and she knew from the moment he kissed her on finale night that they would find a way to be together. She also stated that Abdin has a bigger heart than anyone else.

Hale is madly in love with him and is the happiest she has ever been.

Following their exit from the Big Brother house, the couple continued to spend time together, participating in joint interviews and watching episodes from their season on Instagram.

In October, they even traveled to Reno, Nevada, for the Miss USA pageant, where the Abdin met Hale’s mother.

The feeling between Hale and Abdin is mutual. Abdin is also pleased with how his relationship with Hale is progressing.

He said, “Introducing each other into our lives outside of the Big Brother house has been such a joy. We have shared so many laughs and experiences in such a short time, and I’m looking forward to a lifetime of it with her.”

Moreover, in an interview with US magazine, Abdin said, “I can’t believe it’s been nearly 3 months since being out of the Big Brother house, and December 1 marked our one-month anniversary.”

I can’t believe her birthday and the new year are already around the corner. Time is flying and I am so grateful to have her by my side. It feels like yesterday when I asked her to be mine.

Meanwhile, Hale couldn’t stop gushing about how different their relationship felt compared to her previous relationships. She felt that no one had ever loved her as much as Abdin.

The TV star was overjoyed to meet Abdin’s family and share their home lives. The Big Brother 24 winner also realized that love feels different when you’re with the right person.

Every moment they spent together was a delight for them, and they will always have each other’s hearts.