All about '13 Reasons Why' actor Dylan Minnette's girlfriend. 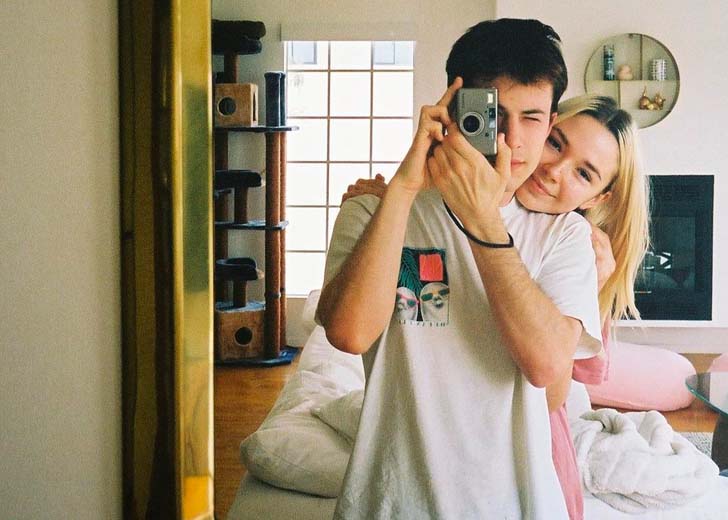 Dylan Minnette is an American actor, musician, and singer best known for playing Clay Jensen in the Netflix drama series 13 Reasons Why.

Minnette has appeared in several movies like Let Me In, Labor Day, Prisoners, Goosebumps, The Open House, Screams, and many more.

For his role as Ralph Dover in Prisoners, he won the National Board of Review Awards in the category Best Acting by an Ensemble in 2013.

The portrayal of Clay Norman in Saving Grace earned him a Young Artist Award in the category Best Performance in a TV Series – Young Actor Age Ten or Younger in 2008.

The actor is also the lead vocalist and rhythm guitarist for the American alternative rock band Wallows.

Does Dylan Minnette have a girlfriend?

The 13 Reasons Why star Minnette has been romantically involved with Lydia Night for over three years. The pair were first captured together at Knott’s Scary Farm.

Fans started to wonder whether Lydia and Dylan were dating after Night and Minnette were photographed kissing at the Halloween-themed Knott’s Scary Farm in Buena Park, California.

According to a source who spoke to E! News, the duo was caught getting intimate at Knott’s Scary Farm on October 6, 2018.

The source said, “The two held hands and at one point Dylan was rubbing her back. They exchanged a couple of kisses outside one of the mazes.”

He celebrated Night’s 18th birthday the same weekend by uploading pictures of the two to Instagram with the message, “happy bday @lydianight:),” making their relationship official.

Since then, Night has appeared frequently on The Wallows’ vocalist’s Instagram profile. The latest post he shared was about a week ago, with Night kissing him on his cheek. It looks like the two of them are head over heels in love with each other.

The star’s girlfriend is the daughter of Morgan Higby Night, writer and DJ who also produced the burlesque show The Shim Shamettes in 1999 in New Orleans.

Night is a lead singer of the California-based pop rock band The Regrettes. The band includes herself, guitarist Genessa Gariano, drummer Drew Thomsen and bassist Brooke Dickson. On January 13, 2017, the band released their first album, Feel Your Feelings Fool!

Dylan Minnette dated Kerris Dorsey in the past

The actor was linked with Kerris Dorsey before his relationship with Night. The pair got together on the set of 2014’s Alexander and the Terrible, Horrible, No Good, Very Bad Day.

Minnette and Dorsey together went to events, walked the red carpet, and had been open about their romance on social media in the past.

However, the two separated sometime in 2018. The pair did not explain the reasons behind their breakup.

Dorsey is also an actress and singer known for her role as Paige Whedon in the series Brothers & Sisters. She is also famous for playing the role of Bridget Donovan in the American crime drama series Ray Donovan.