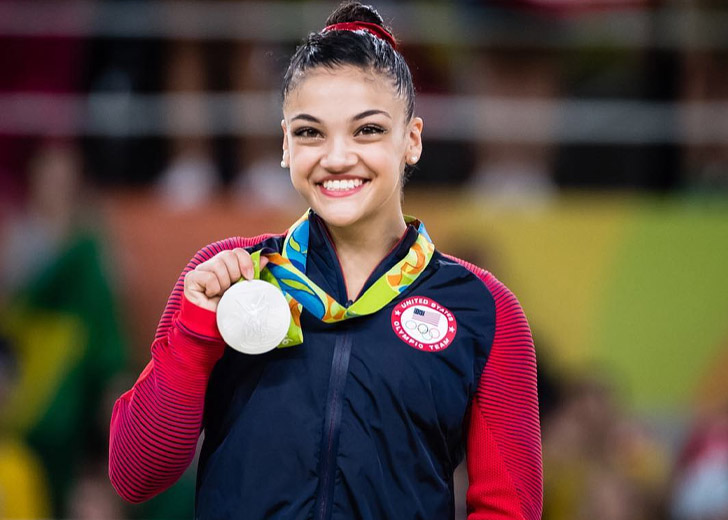 Laurie Hernandez is an Olympic gold medalist and the youngest-ever Dancing with the Stars winner. Due to her immense popularity, people have been invested to learn more about her personal life.

Similarly, some are wondering if she is gay or lesbian. And while Hernandez hasn’t addressed anything about her sexuality, she has been romantically involved with her girlfriend, Charlotte Drury.

Besides, Hernandez recently posted a photo with her partner on December 6, 2022, to commemorate their second dating anniversary. In the photo, Drury was kissing Hernandez on her cheeks. She also wrote in the caption, “2 whole years! can u believe it!!”

Following the post, her fans commented, saying they knew the two gymnasts were dating. For instance, one person wrote, “Cutest power couple out there.”

The couple hasn’t been shy about posting photos of themselves on their Instagram pages, but this is the first time Hernandez has confirmed her relationship with Drury. But, as mentioned earlier, she has yet to reveal her sexual orientation and label herself gay, lesbian, or bisexual.

Previously, the gold medalist gymnast told People in an exclusive interview that she had been dating her partner for less than two years and that life is perfect, but she did not mention the name of Drury.

Laurie Hernandez and Charlotte Drury have been dating since 2020

Hernandez and Drury first met while competing for the United States National Gymnastics Team in 2016. After four years of friendship, the couple began dating in December 2020.

In April 2021, Drury made brief appearances in several of Hernandez’s TikTok videos. For the first time on social media, the Olympic medalist gushed over her girlfriend in a goofy video. Hernandez wrote alongside the post, “Charlotte Drury is my favorite person.”

Despite social media hints about their relationship status, the couple didn’t confirm their romance until the following year, when they celebrated their first anniversary.

Laurie Hernandez and Charlotte Drury had a great time together. (Source: Instagram)

On December 6, 2021, Hernandez posted a selfie of them with the caption, “Cheesin! “Happy New Year!” One of her fans commented on the post, “I’m glad you’ve found who makes you happy.”

On the other hand, Drury has also shared several photos of herself with Hernandez on social media. On August 23, 2022, Drury uploaded a picture of the two of them having a great time at a club concert. After seeing those photos, fans are obsessed with the couple and have commented positively.

Laurie Hernandez and Charlotte Drury are both gymnasts

Hernandez and Drury are enthusiastic gymnasts. Hernandez was inspired when she was five years old after watching gymnasts flip around on TV. She knew she wanted to follow in their well-balanced footsteps and immediately began honing her skills.

On the other hand, Drury began artistic gymnastics when he was three years old. When she was about five years old, she began training at the National Gymnastics Training Center nearby Aliso Viejo, California.

In 2016, both joined the United States National Gymnastics Team, with Hernandez competing in the women’s qualification. Drury almost competed in the 2016 Olympics alongside Hernandez but was forced to withdraw due to a foot injury.

Later, Drury was given a second chance at Olympic glory in 2021 and competed as an alternate in Tokyo. Moreover, Drury is a Type 1 Diabetes advocate, diagnosed before the Olympic trials.

As a result of their hard work and training, Hernandez and Drury are able to win numerous medals.