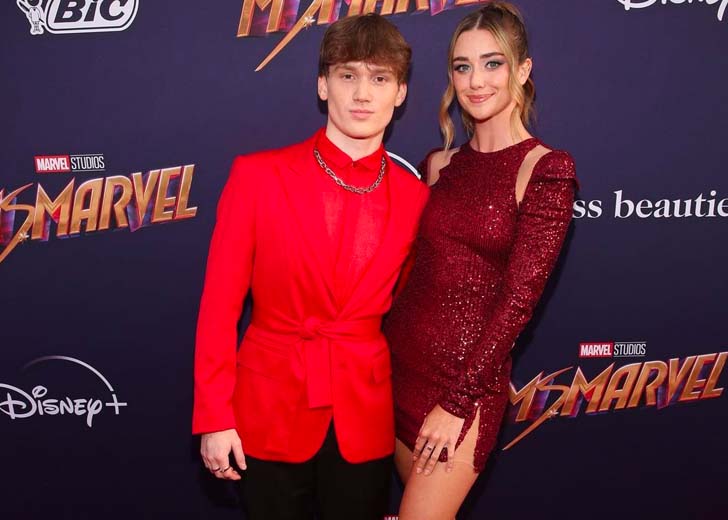 Matt Lintz, aka Matthew Lintz, is one of the rising stars who has currently been making a buzz in the entertainment industry. And it’s all thanks to his performance as the tech-savvy Bruno Carrelli in the new Disney+ show Ms. Marvel.

The show stars Iman Vellani in the titular role of Kamala Khan / Ms. Marvel. As of this writing, two out of the six episodes of the mini-series have already been released on the streaming service, with the premiere being on June 8.

In addition, the American actor has also appeared in a few hit movies and TV shows, including The Way Home, Pixels, The Alienist, and The Walking Dead. In the last one, he played the older version of Henry.

With his rising popularity, people worldwide have been keen to learn more about him. Among many things, one is Lintz’s personal life. So, here is everything we know about it!

Is Matt Lintz dating a girlfriend?

Sorry girls, the Ms. Marvel star has a girlfriend! Lintz is currently in a romantic relationship with his girlfriend named Gracie Sapp.

However, it remains unknown how and when the couple first met each other or when they officially started dating. Nonetheless, after going through Sapp’s Instagram handle, it was found that Lintz had first interacted with his girlfriend’s post on December 31, 2020.

So, it could be said that they have been together for a while now. But, the two only started featuring each other on their respective social media handles on January 1, 2022. On that day, both of them posted similar pictures taken alongside each other.

Since then, Lintz has featured his girlfriend a couple of times only. But it could be said that they already have made a strong bond.

Besides, the actor has already introduced his partner to all of his family members and even took her to his older sister’s wedding.

Both Lintz and Sapp had shared some snaps from that special day. Additionally, Sapp has tagged alongside her boyfriend to multiple red carpet premieres of Marvel shows. The first was Moon Knight, and the second was Ms. Marvel, where Lintz is one of the leads.

Going through all of that, it clearly seems like Sapp has been an understanding and supportive partner to Lintz. And their adorable pictures prove that they are made for each other.

Who is Matt Lintz’s girlfriend?

If you were guessing Lintz’s girlfriend, Gracie Sapp is a celebrity or the child of an actor; then you are wrong as she isn’t any of them.

However, she has been able to garner a good fan following on Instagram as she used to take part in pageant shows. Besides, she was the Miss Kentucky Miss USA 2013. And she did modeling for a while after winning the pageant.

As for her age, the exact number is unknown as her date of birth is undisclosed. However, her Instagram post of October 2021 hints that she might be 23 years of age — around two years older than her boyfriend.

Sapp was raised as the middle child by her parents, Tim Sapp and Michelle Lewis Sapp. While there is no information found on her father, her mother’s Instagram bio mentions that she is a teacher.