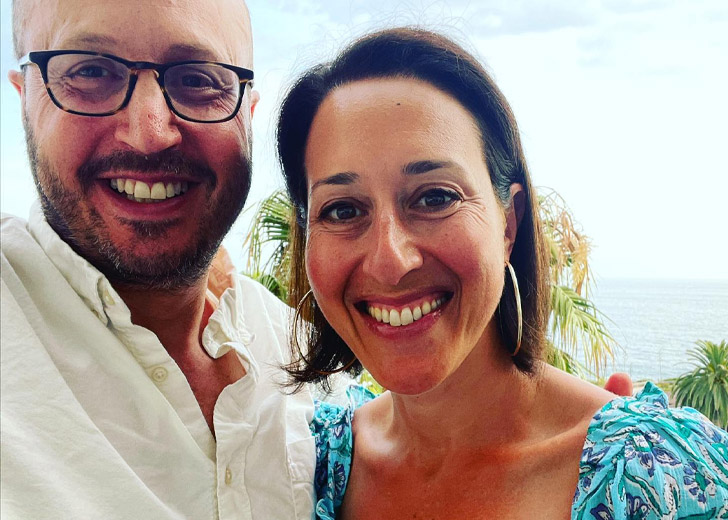 Roger Bennett is a well-known football broadcaster. He is best known for the podcast-turned-NBC Sport show Men in Blazers.

Bennett began his podcasting career in 2011 on the Grantland network. He grasped the spotlight after he worked on ESPN during the 2014 World Cup. Similarly, the broadcaster’s career took off after he joined NBCSN.

In 2014, he reported on the English Premier League for the weekly half-hour television program Men in Blazers. He also hosted series such as The Promoted, which follows a Premier League club’s journey. Furthermore, Bennett released the book titled Mitzvah Disco.

In terms of Bennett’s personal life, he has been married to his wife, Vanessa Kroll, for 22 years. Throughout the years, the couple’s love has grown significantly.

Bennett and Kroll married on October 28, 2000. Their wedding ceremony was held at Kroll’s parents’ home in front of friends and family. After more than two years of marriage, the couple welcomed their first child, a son named Samson Bennett, on December 26, 2002.

Roger Bennett and Vanessa Kroll have been together for over two decades. (Source: Instagram)

The married duo also has a second child; however, the identity of their second child remains unknown. Meanwhile, their third child is a daughter named Zion Bennett, and their fourth or youngest child is Ber Bennett.

Kroll frequently discusses the importance of parenting and children’s needs on her blog and social media. Despite their hectic schedules, Kroll and her broadcaster husband spend as much time as they can with their children. Bennett tweeted a photo of him and her daughter watching the game on April 21, 2019.

He wrote alongside the picture, “Taking my daughter to her first game at Goodison Park with my Dad. Football is a story of generations. Of memories passed from parents to children. And the memories this rekindled of my childhood, mixed with her passion and excitement made this one of the great days of my life.”

Roger Bennett with his wife, Vanessa Kroll, and their children (Photo: Instagram)

Similarly, Kroll shared a picture of her husband and son, writing that she is grateful to have them at home. She noticed that there was more laughter now that they had returned. Currently, the family of six resides in New York City, United States.

Roger Bennett’s wife, Vanessa Kroll, is a writer and entrepreneur

Kroll founded Dynamo Girls in 2014. Dynamo Girls is a program that promotes self-esteem in girls through sports, puberty education, and parent workshops.

The company hosts puberty workshops, which teach children of all genders how to navigate this challenging stage of life. Similarly, they provide information and strategies to adults to help them best support the children.

Kroll also advises large and small organizations on authentically engaging children in their communities. Additionally, she frequently writes about raising tweens and teens in her Uncertain Parenting Newsletter.

Kroll started her pubertypodcast channel in July 2021. It is a place where we can talk, laugh, learn, and even cry about adolescence. On July 21, 2021, her broadcaster husband tweeted, “My wife just launched this podcast. It’s like mine but good.”

“I wish podcasts in general and this podcast in particular were around when I was a kid. Would’ve made life so much easier. So proud of, and excited for her,” he concluded.