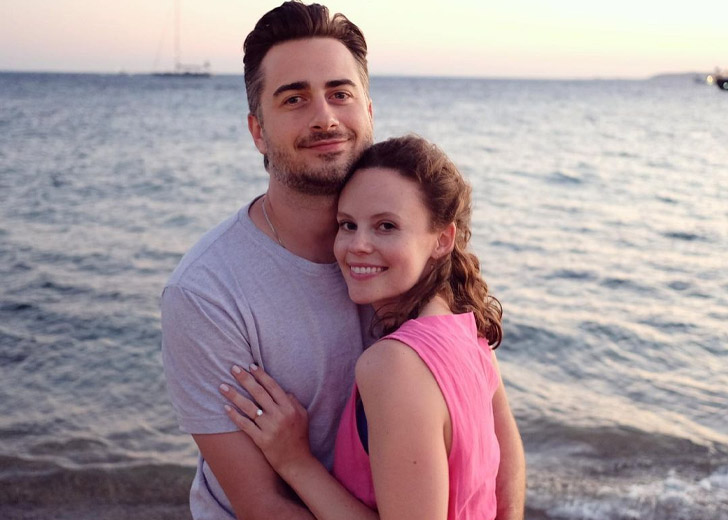 American actress Sarah Ramos began dating her now-husband, Matt Spicer, in 2013. At that time, she was still a student at Columbia University.

However, the actress did not make their relationship public until 2016. Ramos revealed her then-boyfriend, Spicer, on July 13, 2016, by posting a cute picture of them on her Instagram account.

Similarly, Ramos shared another photo with him, where they were seen driving a golf cart. She captioned the photo, “#whenwillyourfaves drive a golf cart through a cemetery.”

The couple’s relationship was solid for three more years after going public before Spicer proposed to the actress. On July 31, 2019, Ramos posted a photo on Instagram announcing their engagement with the caption, “My brand just got 100x more engaged.”

More than a year later, on October 25, 2020, Ramos and Spicer married in A Little White Wedding Chapel in Las Vegas. But the couple waited until December 7 to share the news with the public.

She posted a series of pictures of her and Spicer in their wedding dress and captioned it, “Love is a wild thing.” Following the post, many of her fans congratulated them. One user wrote, “I’m obsessed with your dress. You look amazing and so happy!”

Likewise, the movie is about a young woman who moves to Los Angeles to befriend her Instagram idol. Spicer is also a co-writer on Ingrid Goes West, in addition to being the director.

Matt Spicer had the opportunity to screen ‘Ingrid Goes West’ in front of a crowd of 1200 people. (Source: Instagram)

Similarly, Spicer directed It’s Not You; It was Me in 2013. The plot revolves around a young woman whose relationship takes a dark turn when every sound her boyfriend makes irritates her. We want to keep the ending, but things get a little tangled.

Speaking of Spicer’s online presence, he is not so active on his Instagram handle, where he has gained 7,152 followers. He frequently posts pictures relating to his work. The director last shared a photo of his most recent work for the American Red Cross on July 29, 2022.

Rumors of Ramos dating Dylan O’Brien circulated on social media after a video of them went viral. In the video, the actress was joined by O’Brien as they recreated the iconic scene from The Social Network in which Eduardo discovers that Mark cheated him out of a company he worked hard to build.

The clip sparked speculation about whether the two made the videos in the same house or if they were quarantined together.

Despite the rumors that they were dating, O’Brien spoke about the viral The Social Network cover he did with Ramos. He explained, “Ramos is a good friend of mine, and she’s one of my best friends, and when she first started doing quarantines at the start of the pandemic, we discussed doing one together.”

O’Brien added, “she once sent me a lot of things, but the one that naturally stood out to me the most was that scene starring Andrew Garfield from The Social Network.” He also stated that they did not film it together but had face time and shot the scenes separately.