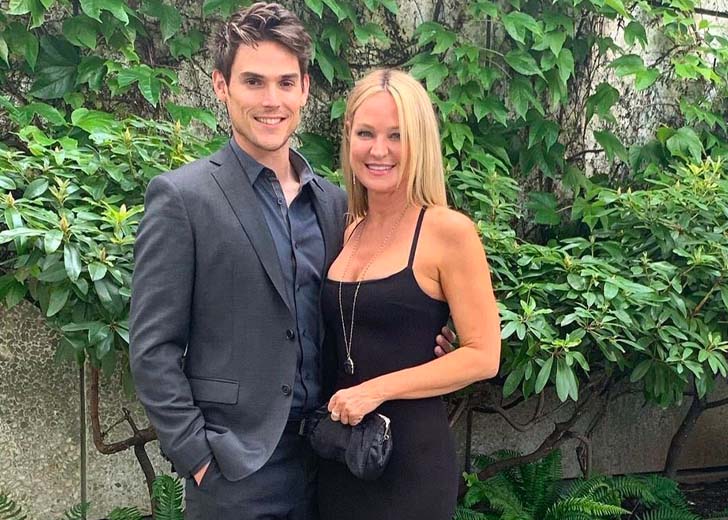 American actress and former model Sharon Case is best known for her appearances in daytime Soap Operas. She recently revealed details about her real-life romance with Mark Grossman.

Mark Grossman began playing Adam Newman on The Young and the Restless in March 2019, and his first scenes aired in May. Likewise, Case has been playing Sharon Newman on the CBS soap since 1994.

Case and Grossman have the best chemistry on The Young and the Restless. Their bitter-sweet relationship keeps fans interested, but there is always something toxic about their relationship.

Later, after being in the show for many years, Mark and Case began dating in real life.

As the two worked together, fans noticed Case and Grossman looking close in social media snaps they posted, wondering if they were a couple or just friends. When the actress made an appearance on the podcast 90201MG to speak with Tori Spelling in 2021, she finally opened up about their relationship.

Moreover, they shared their quarantine, which was a great opportunity to get along and get to know one another.

Sharon Case and Mark Grossman are attending the event together. (Source: Instagram)

Although the couple does not reveal many details about their daily lives and romance, they provide regular updates, particularly on birthdays. Fans are thus relieved that, even if their characters aren’t together on the show, the two are still going strong in real life.

Based on their Pictures, Case and Grossman appear to be madly in love. Furthermore, they ignore critics who point out their 15-plus-year age difference. It’s lovely to see how much affection and commitment they have for each other.

The couple is rumored to be engaged, but neither Case nor Grossman has officially confirmed it. The rumor spread after Case began wearing a large diamond that resembled an engagement ring.

However, they enjoy each other’s company and take turns celebrating major and minor life events. In February 2019, Case uploaded a picture of her with his boyfriend, thanking them for the birthday wish.

Following the post, many of her followers endorsed the couple and said they look great together. Things have remained steady and solid three years into their relationship, and their fans are eager to learn what lies ahead for the cherished couple.

Moreover, the Case even met Mark’s parents in October and had the opportunity to spend time with Mark’s father.

Case was previously married to Corzine and exchanged vows without the presence of their family and friend, which was exactly what she wanted.

The ex-couple was in love, but they couldn’t seem to work out their problems. Case described the couple’s first year of marriage as stressful, and she quickly realized that if they didn’t save their marriage, her dreams of becoming a mother would be jeopardized.

Case stated after the divorce that she would always love Corzine but was unsure whether they could have a relationship. She stated at the time that she was not ready to resume dating and was rumored to be dating Jimmy Wayne.