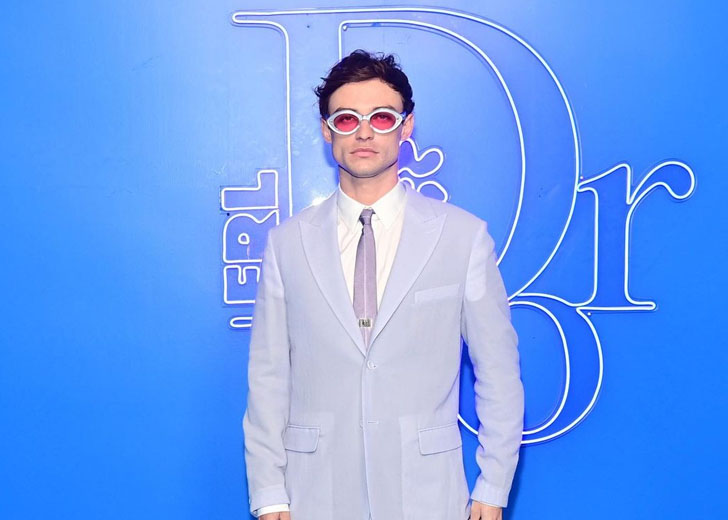 Thomas Doherty, a Scottish actor, is most known for his work on the Disney Channel musical series The Lodge as Sean Matthews, Harry Hook in the Descendants movie series, and Max Wolfe in the HBO Max’s revival of Gossip Girl.

He played football and started acting when he was five years old. He joined the Lothian Youth Arts and Musicals Company and took on several roles, including his stage debut as Aladdin in the animated film Aladdin.

Doherty, one of the most well-known young actors, received recognition when Vogue Magazine named him one of the 50 sexiest boys in the world in August 2017. As the actor’s fame grew, more people were curious to learn about him, particularly about his relationship.

Doherty is not gay, but he also never believed in labels and has always considered sexuality as a spectrum. This realization came to Doherty after he portrayed the role of Max Wolfe in Gossip Girl. In the show, his character is a flirtatious and pansexual teenager who has been in multiple relationships with boys, girls, and even his teacher.

In his interview with Variety, he said, “I have always seen sexuality as a spectrum. But playing Max, a pansexual character, was incredibly liberating. It was very educational, and it definitely made me challenge my own preconceived notions, my indoctrination, of ‘This is who you love, this is what you do, everything else is wrong.’”

As he went on, he claimed that he “doesn’t believe in labels” and that labels are very limiting. “I think as I get older and experience life a little bit more, you constantly evolve, and you’re constantly growing. I feel like labels limit you. They’re almost walls to your growth,” he added.

In the end, Doherty was asked how he identifies himself, to which he replied that he doesn’t use a label.

Who is Thomas Doherty dating?

As mentioned earlier, The Invitation star has been in multiple heterosexual relationships. And he is currently in a romantic relationship with Yasmin Wijnaldum, a Netherlands-born model. The couple has been dating since early 2021.

Reports of their togetherness emerged in March 2021 after the two were seen having a PDA-filled moment during their outing in New York City. As per E! News, the lovebirds leaned forward and kissed as they enjoyed their meal. After their dinner, they went on a walk around the city.

Around one month after their first public spotting, Doherty and Wijnaldum began flaunting their love on their social media handles. Things between them looked to become Instagram official after the actor posted a few images, some with his partner, with a short caption that read, “Bby.”

On the other hand, the model had taken to her Instagram stories to call her boyfriend an “angel” on the occasion of his birthday. The pictures and clips she shared that day showed that the duo was way past the initial days of dating.

In May 2021, the couple made their red carpet debut as they attended the launch party of Grazia Gazette: The Hamptons. In the following months, more pictures, including some PDA-filled ones, of Doherty and Wijnaldum started appearing on their Instagram feed.

On February 14, 2022, they celebrated Valentine’s Day, with the model sharing a picture with her actor boyfriend on her Instagram stories. She wrote, “Happy Valentine’s Day. My favorite person.” Similarly, in July 2022, Doherty shared a sweet wish on the occasion of his girlfriend’s birthday.

Posting a cute picture, he wrote, “HB to my favorite human, the most beautifully strange, wise, loving human.” The special birthday post is also the actor’s last post on Instagram.

The former couple first met in 2016 while working together in the movie Descendants 2, and their chemistry immediately attracted people who began thinking if they were dating. After months of speculations, the two finally confirmed their love in February 2017.

At the time, Cameron told People she and Doherty were “dating,” but they intended to keep their togetherness a secret to make it more “romantic and real.” After the confirmation, they began gushing over each other in their interviews and sharing multiple PDA-filled photos through their respective social media handles.

Their belief in their love was so strong that the actor even told Entertainment Tonight that Cameron was “the one” for him. Around a month later, Cameron told the same outlet that if she were going to marry someone, it would be Doherty.

As years passed, their togetherness continued, and everything seemed perfect between the two. However, fans were shocked after they announced their split in December 2020. At the time, they mentioned that they had already parted ways in October 2020 but took their time before revealing the news.

In her Instagram stories, Cameron wrote, “Hi all, we know there have been some rumors and confusion lately about the status of our relationship and we wanted to set the record straight. In October, Thomas and I decided to part ways.”

“The decision was incredibly difficult, but we still have love for each other and will remain friends. Thank you for allowing us our privacy in this time,” she added.

And unlike other celebrity breakups, it looks like Doherty and Cameron’s split was truly amicable as neither of them has said anything wrong about each other. And while some netizens believed Cameron’s song ‘LazyBaby,’ released in April 2021, was a diss to Doherty, the singer later clarified that it isn’t a diss and she has no bad blood with her former boyfriend.