"My wife is the harshest critic of the reverse," Alex Carey said. 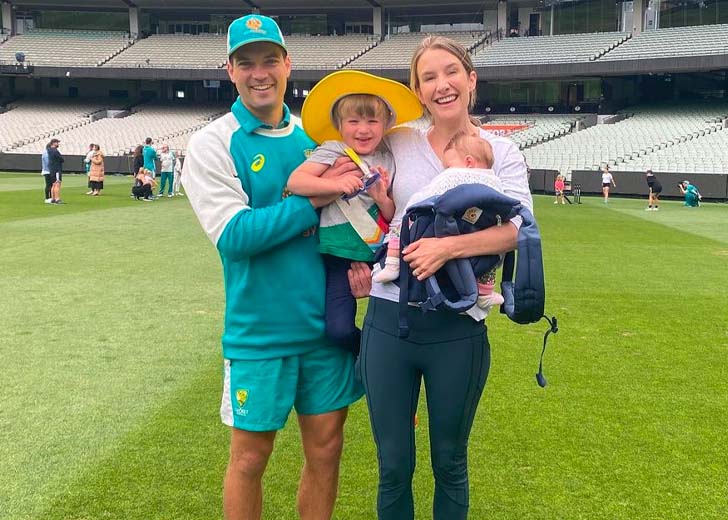 Coming to his personal life, he is a married man. And he often mentions his wife as his greatest critic. Here’s the reason why!

Alex Carey has two children with his wife, Eloise Carey

Alex is married to Eloise Carey. The couple has two children, a son, and a daughter. Louis Robert Carey is his son, and Clementine Rose Carey is his daughter.

Alex Carey with his wife and kids (Source: Instagram)

Louis was born on September 8, 2011. Alex returned early from his overseas assignment at the time to be with his wife Eloise and family for the special arrival. The athlete announced the news on Instagram with a beautiful photo of the mother and child.

He also got blessed with a beautiful baby girl recently. Their daughter, Rose, was born on September 18, 2021.

He shared the news with his fans by posting a baby picture with the caption, “Welcome little Clementine Rose Carey. We love you so much. Eloise, you are just amazing, Louis is a legend of a big brother, and Clemmie, you’re just adorable. I love my little family so much.”

Despite traditional coaching methods in Australia, the cricketer claims that only one person close to him has criticized the tactic, according to espncricinfo.

“My wife is the harshest critic of the reverse,” he said. “She says, ‘don’t play the bloody reverse sweep, not again.”

“But I just politely tell her, ‘you haven’t played the game.’ Yes, you’re going to get out to reverse sweeps and sweeps. But it can also produce some success as well.”

Alex has yet to win over his wife on the reverse sweep, but he has no plans to change his strategy against spin, which he developed five years ago to break out of a rut.

A look-through into Alex Carey’s career

Alex began his career as a promising Australian Rules Footballer. He was the captain of his team in 2010, but his career began to decline after that, and he was dropped from the team in 2012.

When one door closes, another one opens; in Alex’s case, cricket is the other door. Despite his poor start in the new sport, the sportsman was able to secure a rookie contract with South Australia for the 2013-14 season.

He scored over 500 runs and caused 50 dismissals in the 2016-17 domestic season. His performance caught the selectors’ attention, and he was given an opportunity as his fellow teammate Matthew Wade’s form began to deteriorate.

When England visited Australia in 2018, he was finally included in the Australian squad. He has been a regular member of Australia’s ODI and T20I teams since then.

He was named vice-captain of Australia’s T20 squad after some impressive performances in T20 cricket. He was up against Peter Handscomb for a 2019 World Cup squad spot. Finally, he was selected to represent Australia at the 2019 ICC Cricket World Cup.