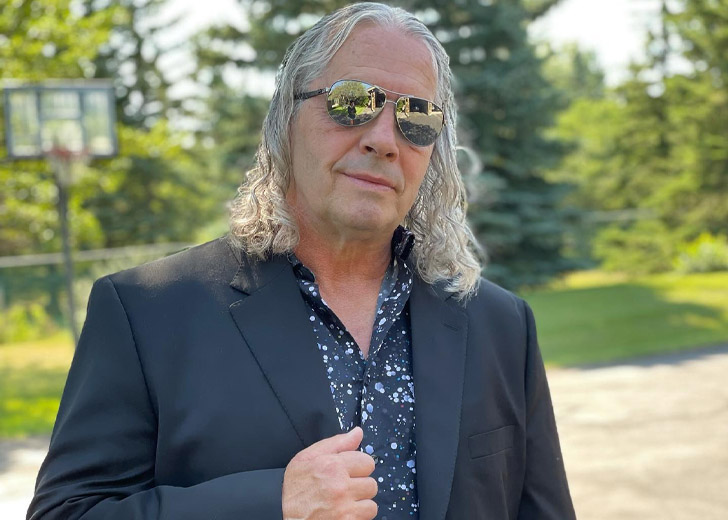 Bret Hart is one of Canada’s most successful wrestlers and one of the world’s best wrestlers of all time. He comes from the first family of pro wrestling.

Bret is the eighth child of wrestler Stu Hart and his wife, Helen Hart. He grew up in a family of eleven children, including four sisters, Ellie, Georgia, Alison, and Diana, and seven brothers, Smith, Bruce, Keith, Wayne, Dean, Ross, and Owen.

The wrestler was born into a non-denominational Christian family, but a local Catholic priest baptized him and his siblings.

When it comes to Bret’s brothers, most of them were professional wrestlers, but some of them chose different career paths in addition to wrestling. Keith made a name for himself in Stampede Wrestling and won several championships, but after retiring, Keith volunteered to become a firefighter.

Bret Hart with his siblings in the 90s. (Source: Instagram)

Wayne was a wrestler who became a referee, and Dean was a music producer and a referee. Ross worked as a television producer and actor along with wrestling. Similarly, Bret’s two sisters, Elizabeth and Georgia, pursued wrestling careers, but his youngest sister, Diana, is a writer.

Bret was introduced to professional wrestling at a young age. As a child, he witnessed his father training future wrestlers, such as Superstar Billy Graham, in the Dungeon, his family’s basement that served as a training facility.

Bret’s father, Stu Hart, was a former CFL football player and amateur wrestler who qualified for the 1940 Olympic Summer Games. Bret mentioned that he got discipline from his father in the 1998 documentary Hitman Hart.

Later, he was trained in pro wrestling by two Japanese wrestlers who worked for his father, Tokyo Joe and Kazuo Sakurada.

His father, Stu Hart, trained all of his siblings, including Bret Hart. (Source: Twitter)

The wrestler’s first job in wrestling was pulling lucky numbers from a metal box during intermission at Stampede Wrestling shows when he was four years old. When he was a little older, he would sell programs to the shows, something all seven of the Hart brothers did.

He frequently competed for customers with his younger brother Ross because fans preferred buying from the youngest Hart child. To conclude, Bret’s father played a significant role in his and his siblings’ lives.

Bret’s brother, Owen, was also a professional wrestler for different companies, including WWE. Unfortunately, Owen died in an accident during a live wrestling match. Recently, Bret used social media to pay tribute to Owen on the 21st anniversary of his death.

He shared a photo of The Hart Foundation’s Attitude Era lineup, which included himself, Owen, Brian Pillman, Jim The Anvil Neidhart, and The British Bulldog. He captioned the photo, “Ohana means family. Family means nobody gets left behind or forgotten.”

Bret is the only survivor of that photograph, as Pillman died in October 1997, Bulldog in May 2002, and Neidhart in August 2018. Moreover, Bret’s brother Deah died of a heart attack caused by kidney failure.