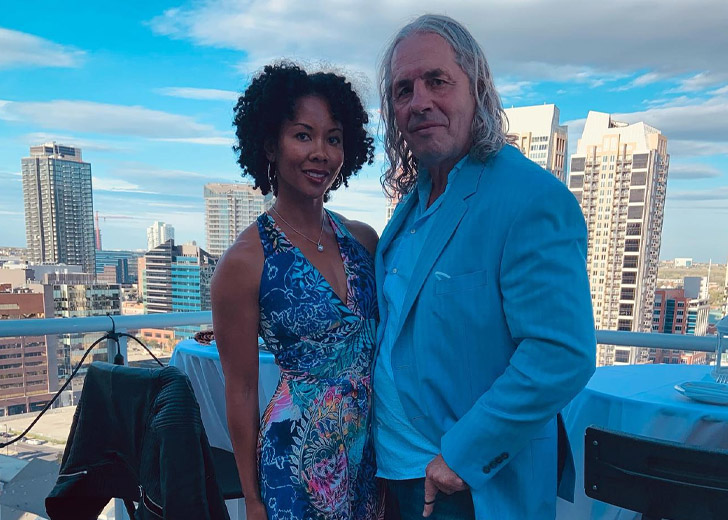 Bret Hart is a retired Canadian-American professional wrestler currently under contract with WWE as a legend. As for his personal life, he has been married to his third and current wife, Stephanie Washington, since 2010.

The couple has endured some difficult moments but always stood by each other’s side. One such moment was when he and his wife fought to defeat his prostate cancer.

Hart revealed his prostate cancer on Instagram on February 1, 2016. He shared the news alongside a photo of his two young grandchildren and wrote a lengthy caption, “I’ve had a great lifelong dance, and I’m a survivor of many hard battles. I now face my toughest battle.”

“With hesitation and fear, I openly declare myself in my fight against prostate cancer. In the next few days, I will undergo surgery with the hope of defeating this nemesis once and for all. My children, grandchildren, and my loving wife Steph have been and will constantly be at my side.”

“To be a leader in awareness and to set the example for men everywhere who find themselves in my very same shoes, that prostate cancer can be beaten,” he concluded.

Even though he was going through a difficult time, Hart never gave up hope. He said, “I refuse to lose, I will never give in or give up, and I will win this battle or die trying.” The wrestler wanted to show men worldwide who are in my shoes that prostate cancer can be defeated.

Moreover, Hart was not alone during his difficult time; his wife, family, and fans stood by him throughout his cancer journey.

In April 2019, Hart’s wife gave an exclusive video interview with Posted Calgary, where she candidly told the story of her husband’s prostate cancer diagnosis and how they worked together to overcome it and referred to it as the couple’s disease.

Bret Hart’s wife has been the biggest support system throughout his cancer journey. (Source: Instagram)

She stated that when the wrestler was first diagnosed with cancer, she was present at the meeting and became terrified when she heard the word cancer. Later, Hart had a PSA test, and his PSA level skyrocketed, prompting the doctor to prepone the surgery date.

That was the couple’s lowest point. But Washington knew that to face the difficult time, she needed to be vital for the wrestler. Throughout the process, the couple assisted one another.

Washington also mentioned how Hart’s announcement encouraged other men to get checked themselves. Knowing that, the couple felt relieved as his message helped different people worldwide and saved more lives.

Furthermore, Kellie Fedora reached out to them, and they became friends because they were both wives of prostate cancer survivors. Fedora was also among those who stated that prostate cancer is a couple’s disease that affects both the husband and the wife.

Hart revealed in 2017 that he was 100 percent recovered from prostate cancer after years of treatment and the support of his family.

Bret Hart was diagnosed with skin cancer in 2020

While the fear of prostate cancer ended in 2017, the hard time wasn’t done with the Hart family. The wrestler announced his skin cancer diagnosis on January 31, 2020, by posting an Instagram photo of a small stitch on his shoulder.

He wrote, “Goal for 2020 and beyond: wear more sunscreen! Basal cell carcinoma removal scheduled soon. Another opportunity to remind everyone to look after your health and #getchecked.”

Since retiring as a wrestler, Hart has had several health issues, including prostate cancer in 2016 and a stroke in 2002.