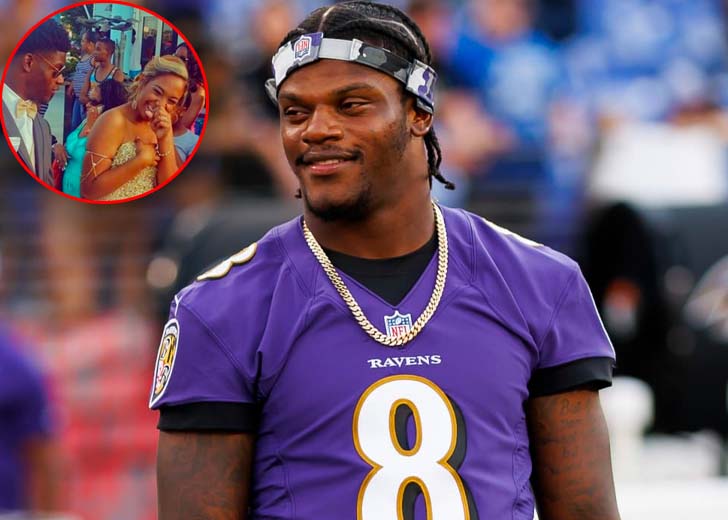 He played college football at Louisville. As a sophomore, he won the Heisman Trophy and was taken by the Ravens as the final first-round choice in the 2018 NFL Draft.

After an injury to incumbent Joe Flacco, Jackson took over as the Ravens’ starting quarterback in his first season. He led the club to a division title, becoming the NFL’s youngest quarterback to start a playoff game at age 21.

With Jackson becoming the topic of the internet due to his football career, people are eager to learn more about the great player, particularly the identity of his secret girlfriend. Who is Jackson dating? Read along to know.

Lamar Jackson and his girlfriend have been dating since college

According to Cheat Sheet, Jaime Taylor is Jackson’s girlfriend, and the two have been dating since his college days at the University of Louisville. They met in 2017 and have been together ever since.

There are no photos of her on any of Jackson’s social media platforms, nor are there any press photos or photos of them together at any events. Taylor is of African-American ancestry, as per Sportskeeda.

In an interview with the Baltimore Ravens, Taylor addressed how she’s learned to handle criticism when the football star calmly tells her not to get angry when she reads things online or elsewhere. He suggested that she should not take it personally and continue doing what she is doing.

The Buffalo Bills defeated the Baltimore Ravens on Saturday, January 16, 2021. This was not only a setback for the team, but they also lost Jackson near the end of the third quarter due to a concussion.

The NFL star read many blunt comments about his performance on social media at the time. When he heard the criticism, he did not become enraged. And instead, it strengthened his resolve.

Some of the snubs were filed away. He retweeted a post about a Sports Illustrated article that failed to recognize his Heisman Trophy-winning season as one of the ten greatest college football seasons.

Taylor, Jackson’s girlfriend, is astounded by his consistently positive attitude. Jackson, according to Taylor, never lets outside noise define how he feels about himself.

“He’s taught me how to handle criticism,” Taylor mentioned. “I mean, I used to get mad when I’d read stuff. Then I’d look at him, and he’s just fine. He says, ‘Let them do the talking. You don’t have to say anything. Just show them.'”

Lamar Jackson dressed as Harry Potter for his girlfriend

Jackson dressed up as Harry Potter for a Halloween event in October 2019. Taylor appears to be a huge Harry Potter fan and thought up the Ravens quarterback’s Halloween costume. But even though he did so, he once admitted he struggles to stay awake during movies.

About his costume, he said [via Heavy], “I thought it was pretty cool. My girl, she wanted to do a Harry Potter theme.”

“Had the little coat on, I felt like I was back at the wizard’s place. It was pretty dope. I wouldn’t say I am a fan of Harry Potter. I watched a few movies but it’s pretty long. I get sleepy. I’ll be watching it for like a good hour then I fall aslee. Then Harry Potter start watching me,” he shared.