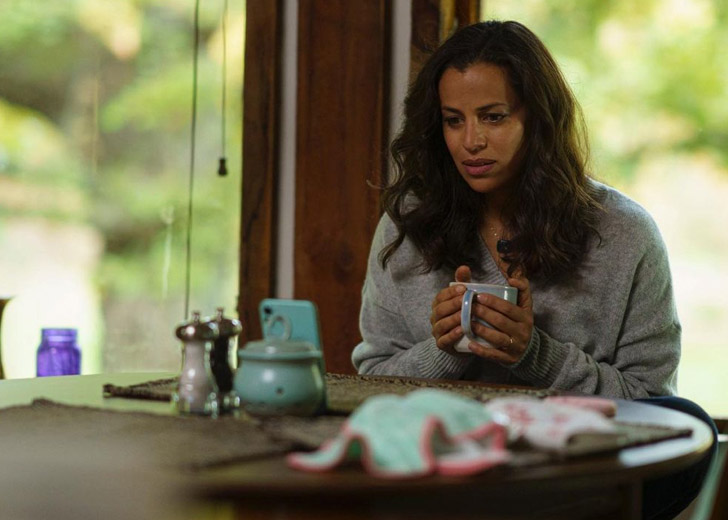 Karkanis worked in the entertainment industry for over two decades. She appeared in several television shows and films, including Saw IV, Lost Girl, and others. In addition to acting, Karkanis provided the voice in Wild Kratts as Aviva Corcovado.

The Manifest actress was raised in several countries because her parents were international development professionals.

Karkanis was born in September 1981 in Lethbridge, Alberta, Canada, to a well-established Christian family. As of 2022, she is 41 years old. However, the name of her father and mother is unknown.

According to the Greek Reporter, the talented actress identified herself as having Greek and Egyptian roots but admitted that she could only speak a bit of the Greek language. However, Karkanis is fluent in three languages; French, Spanish, and English. And her nationality is Canadian.

Talking about Karkanis’s educational background, she completed her early schooling at a local high school in Lethbridge, Canada. She then enrolled at McGill University in Montreal, Quebec, Canada, where she received her bachelor’s degree in political science.

After finishing her bachelor’s degree, the Canadian actress was interested in attending law school, but she soon changed her mind to pursue her passion for acting. Karkanis told a MetroNews Canada reporter, “Acting was something that I always liked, but I never really thought of it as a career choice.”

Karkanis began her career by debuting in the popular Canadian television animated series Stickin’ Around in 1996. Since then, she has worked on several well-known television shows, including Missing, Delilah and Julius, and Chappelle’s Show.

Likewise, the actress appeared as a regular cast member in the first season of the Canadian teen drama The Best Years in 2007 and The Border from 2008 to 2010. She also appeared in Lost Girl from 2011 to 2012.

Later in 2013, Karkanis appeared in the AMC drama series Low Winter Sun as Dani Khalil. The actress thoroughly enjoyed her character because Khalil’s persona was similar to hers, as both of them do not tolerate nonsense and share a love for Detroit. She was also cast in Lifetime’s post-apocalyptic drama The Lottery in 2014.

Following the year, she portrayed Octavia Muss on The Expanse. The Canadian native’s most recent appearance was on the NBC TV show Manifest. She played the character Grace Stone in the show. She died at the end of the Season 3 finale, so it was unclear whether Stone would return for Season 4.

Why did Athena Karkanis leave Manifest?

Despite Stone’s death, fans hoped Karkanis would remain on the show. However, Manifest writer Jeff Rake told Variety that Grace’s death meant Karkanis had to leave the show as a full-time cast member.

Rake also expressed his affection for Karkanis and said he enjoyed working with her on the show. He said, “I think that the actress is so great — she’s so lovely, and she had become such a fan favorite, which was so gratifying to me.”

Likewise, on June 22, 2021, Karkanis posted a farewell message on Instgaram. She wrote, “It was a wild and wonderful journey, but sadly, it has ended. I am gutted that the end of this story will not be told, but so grateful for the three spectacular years we did have. So thankful for our amazing Captain @reallyjeffrake.”

“Thank you for flying our plane and for the writers and producers, our incredible New York crew, to the cast… I love you guys so much! and especially, thank you to the fans! We would be nothing without you! Don’t cry because it’s over; smile because it happened -Dr.Seuss.”

Karkanis did appear in Season 4, Part 1 of Manifest as her character’s ghost in the midseason finale. Stone was able to see her daughter, Eden, as a toddler two years after her death in one emotional scene.