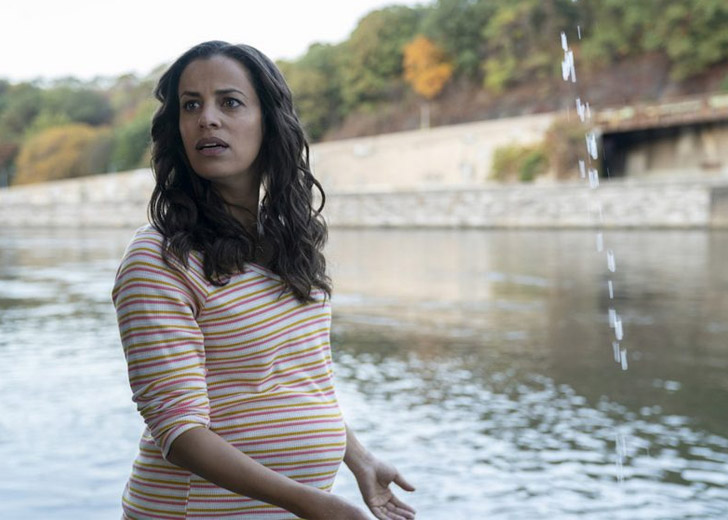 Karkanis began playing the role of Stone in Manifest in 2018. She appeared in every episode leading up to the season three finale, in which she was brutally murdered. The actress tried her best to protect her loved ones throughout the season.

Her outstanding performance as a mother and wife on screen has led some to wonder if she possesses the nurturing quality in real life.

According to Nicki Swift, Karkanis is reportedly dating a Canadian journalist, but no solid evidence supports that claim. That being said, she has a partner/husband but is yet to reveal his identity.

The actress made a comparison between her pregnancy and Stone’s situation. As a mother, Karkanis compared pregnancy to the Manifest series, in which her character goes through numerous body changes and hormonal shifts that a significant other cannot fully understand.

In an interview with Cinema Blend, Karkanis said, “I remember, during my second pregnancy, having this epiphany that pregnancy is a very lonely thing. Because as much as my partner was extremely supportive, and I have no complaints about how he handled it, I just remember things like the nausea, and it’s all, like, nothing for him.”

“He can feel bad for me, and make me a cup of hot ginger water or whatever. But there are these things that, it’s just me. I’m doing that,” she added.

The fact that the actress’s partner showed her a lot of support throughout her pregnancy indicates that everything in their relationship has been going smoothly up to this point.

Moreover, Karkanis appears close to her on-screen husband on Manifest, Josh Dallas. The audience loved their on-screen chemistry, which was undoubtedly influenced by their real-life friendship.

She also posted a photo of herself with Dallas on Instagram on April 2, 2021, and considered Dallas to be one of the most generous actors she had ever met. The actress believed playing the role of Stone would not be easier without a partner like him.

Athena Karkanis is a mother of two kids

Karkanis is the best fictional mother and a wonderful mother to her children outside the set. She has two kids, an older daughter, and a younger son, just like in the show Manifest.

However, Karkanis has not revealed details about her children. She posted a picture of her two kids on Instagram on November 15, 2021, but only after covering their faces with a heart and smiley face.

She wrote alongside the photo, “I found myself overcome with emotion, thinking about how momentous this return to the stage is. As a performer (who’s first many years of her career were on the stage) and as a lover of theatre and dance, I felt so happy and grateful to be there and to be sharing it with my children.”

Athena Karkanis’s character met a tragic end in the ‘Manifest’

Karkanis gave an excellent performance alongside Dallas in the show. However, her character Stone died tragically at the end of Season 3 of the show after being murdered.

As a spoiler, the tragedy did not end with Stone being stabbed; she died from her wounds with Cal by her side.