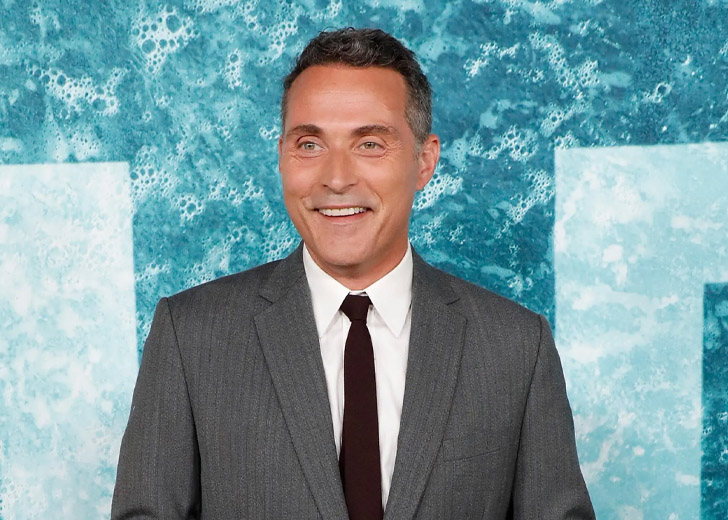 English actor Rufus Sewell is best known for his role as John Smith in the American dystopian alternate history television series, The Man in the High Castle.

Sewell had his breakthrough role in 1993 as Tim in Michael Winner’s film Dirty Weekend. Later, he became well-known for his roles as villains in films such as A Knight’s Tale, The Legend of Zorro, Helen of Troy, and many others.

Similarly, he made his television debut as Lord Melbourne on ITV’s Victoria in 2016. Fast forward to now, he is starring as Roger Salas in the new Netflix series Kaleidoscope, which premiered on January 1, 2023.

Sewell has received a lot of love and support for his roles in numerous movies and TV shows. However, the actor’s fans have noticed that he has slightly lazy eyes — his eye color is blue.

Sewell’s eye is not corrected, but it makes him oddly cute, so it was never a significant issue for the actor. Many fans also believe that his eyes are more appealing.

One of Sewell’s followers tweeted, “Rufus Sewell, making dissimilar eye shape attractive since ’98.” Likewise, another Twitter user stated that he hesitated to tweet because it was controversial, but he admired Sewell’s lazy eye.

Furthermore, Sewell’s fans thought his lazy eye added much to his character. One social media user even asked, “Is it just his wonky eye that leaves Rufus Sewell typecast as the bad guy?” on Twitter. Following the tweet, one person expressed his desire to see Sewell play Prince Charming because he deserved it.

On the other hand, some people believed that the actor’s eyes improved significantly when he starred in the 2006 film Tristan and Isolde. Fans also noticed Sewell had his eye fixed while playing Adam in Vampire Hunter. However, this is not the case. Sewell did not have any eye surgery or treatment for his so-called “lazy eyes.”

Sewell has worked in the entertainment industry for over two decades. He made his first acting debut in the film Carrington in 1995 when he was 28 years old. Sewell was attractive and young at the time, but he is now 55 years old and aging with each passing day.

However, the English actor does not mind growing old. At the premiere of M. Night Shyamalan’s new thriller Old, he told Page Six, “I don’t want to overstate here or ask for trouble, but I’m not afraid of aging. I’m not somebody who wants to look younger than I am. I quite like being 53 , andI wasn’t that sorted out when I was younger.”

Sewell needed six hours of makeup to play a character who was 20 years older than him in the film Old. The makeup artist added more wrinkles to his face to make him appear older, so Sewell needed clarification on which was him and which was the makeup. But when he removed his latex prosthetic makeup at the end of each shoot, he felt even more grateful for his age.