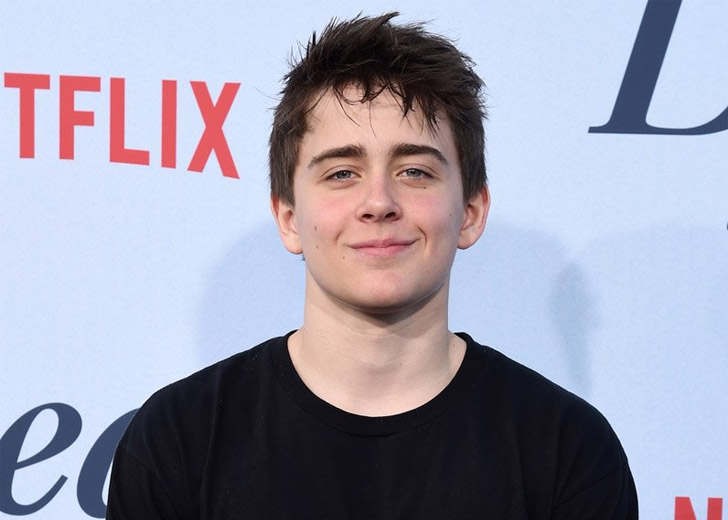 American actor Sam McCarthy is best known for his role as Charlie Harding in the Netflix dark comedy series Dead to Me. He has won the hearts of many people because of his outstanding performance in the movie.

McCarthy is an attractive, intelligent, and handsome young man who is charming and daring. He has a muscular and strong physique, as well as impressive body measurements and a rhomboid body type.

The actor stands about 5 feet 7 inches tall and weighs about 56 kg. He has short brown hair that is stylish, as well as beautiful and mesmerizing blue eyes.

1. Sam McCarthy’s father is an actor

Sam was born to Carol Schneider and Andrew McCarthy on March 15, 2002. As of 2022, the actor is 20 years old. Apart from his parents, he has a half-sister named Willow McCarthy.

McCarthy’s father is an actor, travel writer, and television director. He was best known as a member of the Brat Pack, appearing in films such as St. Elmo’s Fire, Pretty in Pink, and Less than Zero. Similarly, he is best known as a director for his work on the Emmy Award-winning series Orange Is the New Black.

Sam McCarthy’s father is an actor and director. (Source: Twitter)

Coming back to Sam, he attended and graduated from The Professional Children’s School in New York in 2020. As he was born into a star-studded family, he inherited his exceptional acting abilities from his father.

2. Sam McCarthy began his acting career at a young age

McCarthy grew up performing in school plays because it was required for everyone in elementary school. His father is also in the entertainment industry, so he grew up on different sets watching various productions.

As he grew older, McCarthy expressed his desire to become an actor someday. Then, when the actor was about thirteen, his father was acting in one of the shows, and there was a small part that his father thought McCarthy should audition for and tape.

Since then, he’s been going to auctions regularly until he booked Dead to Me a few years later.

3. Sam McCarthy has accumulated a healthy net worth

McCarthy has amassed a sizable fortune through his acting career. Aside from acting, he may earn money through endorsement and advertisement. That said, it has been reported that he has an estimated net worth of $1 million.

The actor began his career in 2016 as Young Hank in the ABC drama series The Family. The series follows the return of the mayor’s young son, who was presumed dead after missing more than a decade ago. However, ABC announced that the series had been canceled after one season.

The same year, he was cast in the NBC series The Blacklist and the American sitcom The Jim Gaffigan Show. McCarthy also appeared as Sam Barber Jr. in the thriller series Condor and in the tragicomedy Dead to Me.

4. Sam McCarthy made his debut as Charlie Harding in ‘Dead to Me’

In Dead to Me, McCarthy’s character, Charlie Harding, appears to be a complicated guy, and the actor confirmed that he shares characteristics with his on-screen character.

Similarly, McCarthy stated that preparing for Harding was relatively easy. He mentioned that his character in Dead to Me was very similar to who he was when he was cast in the role.

Sam McCarthy in the Netflix series ‘Dead to Me’ (Source: Instagram)

“I really only needed to talk to a couple of kids from the west coast to get a feel for it, and I was good to go,” he added.

5. Sam McCarthy is rumored to be dating Talia Ryder

McCarthy has been rumored to be dating fellow actress Talia Ryder for a while now. And the speculations check out as they have known each other for years. The couple has been seen on each other’s Instagram stories a few times.

However, neither has confirmed nor denied their relationship. McCarthy’s rumored girlfriend is best known for her role as Skylar in Never Rarely Sometimes Always and Tessa in West Side Story.