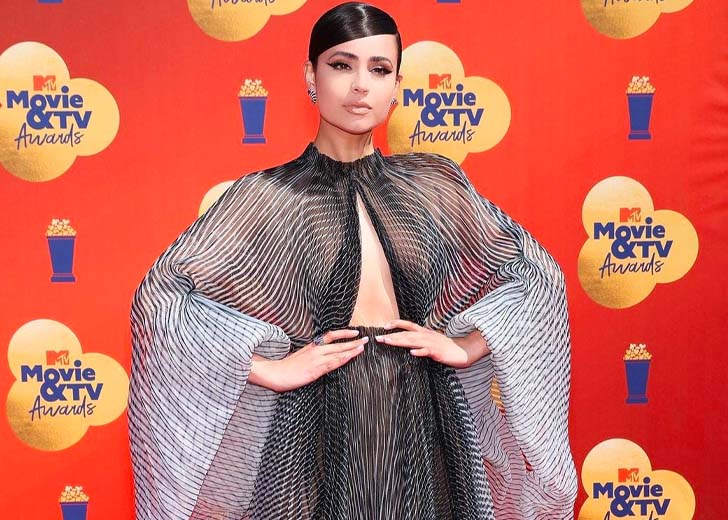 Disney fans might easily recognize Sofia Carson as the actress who came into the limelight for her performance in Disney Channel’s Descendants franchise. In the original Descendants movie and its sequels and spinoff series, she played the role of Evie.

Since her rise to fame, Carson has appeared in multiple movies and TV shows, including Famous in Love, Pretty Little Liars: The Perfectionists, Feel the Beat, and Songbird. Currently, she is set to star as Cassie in the new Netflix movie Purple Hearts, which is releasing on July 29, 2022.

Besides being a talented actress, she is also a singer whose musical journey started through the Descendants franchise. And she has since released multiple hit songs such as ‘Love Is the Name,’ ‘Back to Beautiful,’ ‘Ins and Outs,’ ‘Rumors,’ ‘Fool’s Gold,’ and ‘Glowin’ Up.’

Carson released her debut studio album titled Sofia Carson in March 2022. With all that done, it must be sure that the multi-talented personality has earned well and accumulated a healthy net worth. So, how much is Carson’s net worth?

Celebrity Net Worth reports that Carson has an estimated net worth of $6 million. But given her talent and the work she will do in the future, it’s for sure that the actress and singer’s net worth will only rise.

Another thing that has been gaining some talk about Carson is her personal life. Since her breakthrough role, people have been invested in learning more about the actress’s love life. So, here is a look at it!

Is Sofia Carson dating a boyfriend?

Carson has always been a private person regarding her romantic life. Due to that reason, she has neither spoken freely about her relationships nor revealed anything about having a boyfriend in the media or in public.

However, the actress does talk a little about her love life, once in a while, through her songs. For instance, during a conversation about her song ‘Ins and Outs’ with Coveteur in December 2017, she mentioned that she has always been afraid of falling in love.

She said, “My whole life I’ve been afraid of falling in love, just because that means being vulnerable and that you could get hurt.” After that, Carson talked about her song and said, “The song, to me, is about finding strength in vulnerability.”

“and looking the person you love in the eye and telling them, ‘You can tell me all of your ins and outs. Don’t be afraid, because it will only make it easier to love you.’ It’s a really beautiful, kind of vulnerable love song that’s also a little sexy.”

Similarly, during her May 2019 interview with Cosmopolitan, Carson dived a bit more into her personal life and claimed that she had no interest in dating. She said, “I’ve never tried dating apps. I’m dating my career.”

Additionally, she admitted that she had decided never to date anyone from the entertainment industry. “I made a decision about two years ago that I don’t want to date anyone in the [entertainment] business. So as you can imagine, that makes it a little bit difficult.”

Furthermore, during her recent interview with Extra in January 2022, Carson stated that her decision to keep her romantic life hidden was “absolutely intentional.” She shared that it’s about her art, music, and films she puts out into the world, not her personal life.

She continued, “I still do love sharing personal moments that are special to me with fans, but it was definitely a choice to keep my private life private because it’s not what this is about for me. It’s about more than that.”

To conclude, it couldn’t be known if the actress is currently dating someone or not. She might be dating a boyfriend privately, but until proven, it’s only fair to say that her present relationship status is single.

Carson’s private love life has played a vital role in keeping the details of her dating history away from the public eyes.

However, her interview with Coveteur in December 2017 hints that she might have an ex-boyfriend. During that interview, she mentioned that she would always write emotional and dark love songs about her broken heart during her childhood.

And that used to surprise her as, at the time, she had never even kissed a boy. “Maybe in a past life I got my heart really broken,” she added.

Sofia Carson posing on the red carpet of the Grammy Awards (Photo: Instagram)

Besides that, there has been another instance where people thought the actress might be in a relationship. It was when Carson was rumored to be in a romantic relationship with actress Sofia Vergara’s son Manolo Gonzalez Vergara.

The rumors started in December 2016 after Carson posted a picture with Manolo in which she was cuddled up to him. The rumors were again ramped up in February 2018; however, like last time, it was never confirmed or denied. As of now, it’s unknown if they were dating or not.