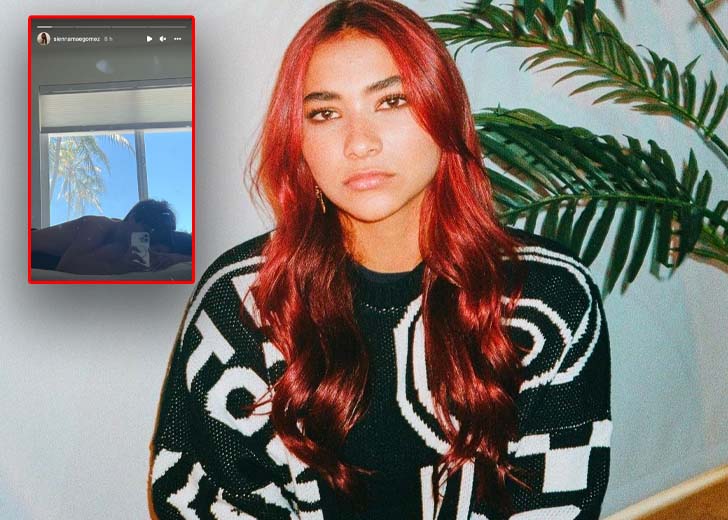 Sienna Mae Gomez has again teased about her relationship with her new boyfriend.

On Thursday, August 25, 2022, the social media star took to her Instagram handle to flaunt a new picture with her new partner. In her story, she shared a mirror selfie in which she was lying in bed with her beau on top of her.

In the photo, it could be seen that her boyfriend was shirtless. Additionally, the image’s background hinted that it was a sunny day and their location might be around a beach as multiple palm trees were visible.

A couple of days ago, on August 22, Gomez posted multiple snaps from her ocean ride and some pictures taken at her residence. One of those pictures was with her partner in which the duo was seen hugging tightly.

It might also be possible that they were kissing, but that couldn’t be said exactly as their faces were hidden, mainly from the celeb’s phone. In the seventh slide, a boy is seen cutting mango and giving it to Gomez, and many wonder if he is her new boyfriend.

On June 3, 2022, the TikTok star shared a short clip via her Instagram stories in which she was seen standing on what seemed like a balcony from where there was an excellent greenery view.

Moments later, she turned backward and was hugged by a boy, whom many believe to be Gomez’s new boyfriend. However, the face of her alleged boyfriend wasn’t seen, due to which his identity remained unknown.

In her next story, she reshared a quote from an Instagram page that read, “One day you’ll realize that God was putting it all together the whole time.” Through the quote, she might have referred to her newfound romance and her return to social media after a long hiatus.

That said, the main question remains; who is Gomez’s new boyfriend? The answer to that question remains unknown as the social media star hasn’t said anything about her new beau, including his identity and name.

Whenever she has posted anything with her partner, she hasn’t tagged her boyfriend’s Instagram handle. If she had done so, that would have given out some details on him. But for now, Gomez is maintaining privacy over her love life while still teasing something.

The reason why she might be keeping privacy about her new relationship might be the result of her last relationship, which didn’t end well. She was previously dating fellow TikTok star Jack Wright — a relationship that ended in Gomez receiving backlashes due to sexual assault allegations from Wright.