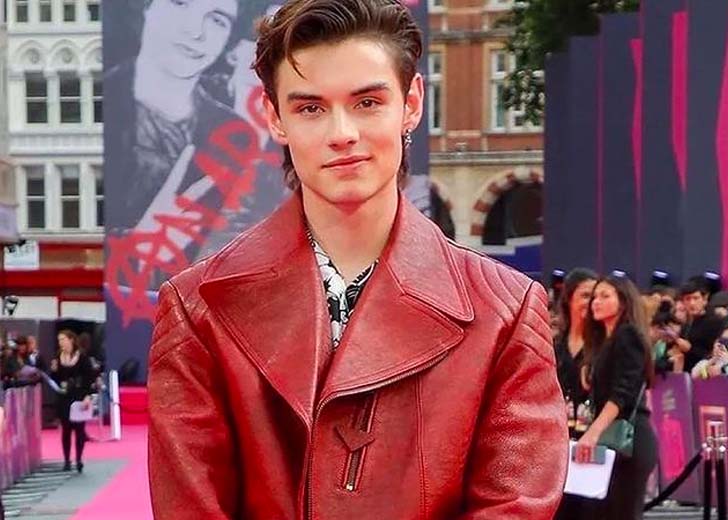 Louis Partridge is an uprising English actor who came into the limelight after portraying the role of Viscount Tewkesbury, aka Tewkesbury, in Netflix’s 2020 mystery film Enola Holmes. He shared the screen alongside Millie Bobby Brown, Henry Cavill, Sam Claflin, and others.

He is set to reprise his role in the sequel titled Enola Holmes 2 as well, with all of the cast members returning in it as well. The sequel is presently in the post-production stage and is expected to release in 2022.

Additionally, Partridge is going to appear as Peter Pan in the upcoming drama-fantasy movie The Lost Girls, alongside Vanessa Redgrave, Joely Richardson, Iain Glen, Julian Ovenden, and others. The film is set to release on June 17, 2022.

With his ever-growing popularity, audiences around the world are getting to know him and they want to learn more about him. Among many things, one is the actor’s personal life!

Is Louis Partridge dating a girlfriend?

Partridge remains pretty quiet when it comes to his personal life. The actor is yet to shed any light on his love life, leaving his fans guessing whether he is in a committed relationship or not.

The Wandsworth, London native hasn’t spoken about having a girlfriend in his interviews. Additionally, although he is active on social media – he only uses Instagram – he hasn’t hinted at anything about having a possible partner.

On one hand, it seems like he is keeping himself away from love for a while and is giving his focus on his acting career. On the other hand, it might be possible that he might be dating a girlfriend but is keeping his relationship away from the media and the public.

However, as nothing is sure yet, it could only be said that Partridge’s present relationship status is single.

Louis Partridge is rumored to be dating Lulu Everly

While there is no confirmed information about Partridge’s present relationship or girlfriend, he has been heavily rumored to be dating a girl named Lulu Everly. It’s said that his rumored girlfriend is a non-celeb and most probably his high schoolmate.

The rumors of Partridge and Everly’s romance first started swirling around the internet after the actor’s fans started digging into his profile in search of his possible girlfriend. In the end, they found multiple pictures of the rumored couple.

It was also gossiped that the couple had already been together for two years – in 2021. However, as none of those pictures were ever found on Partridge’s Instagram handle, people started to wonder if these rumors were false or whether the rumored couple had broken up.

As of now, these questions have neither been answered by the actor nor the speculations have been confirmed or denied. To date, the romance rumors between Partridge and Everly remain as it is.

Louis Partridge has been heartbroken before

While Partridge’s romance rumors with Everly remain the same, the actor has previously confirmed that his heart has been broken once.

In a video Q&A session for Seventeen Magazine with his Enola Holmes co-star Millie Bobby Brown, the two answered seventeen questions and one of them was how did they deal with heartbreak.

When asked the question, Brown first answer and laughingly said, “Cry.” Similarly, Partridge answered the question by saying, “Stand at a gate and cry and watch your love walk away.”

After he said that, Brown asked him if he has ever been heartbroken. In reply, Partridge said, “Yeah. Yeah.” Brown then continued saying, “It’s horrible. Everyone goes through it.”

She then mentioned that a heartbroken person should just listen to Taylor Swift’s songs, drink a nice cup of tea, and get over their former lovers. True Englishman things, isn’t it?

Louis Partridge was once linked to Millie Bobby Brown

Speaking of Partridge and Brown, the two co-stars were once rumored to be in a romantic relationship. It all started after they starred in Enola Holmes in 2020, where their on-screen chemistry was loved by everyone.

Later, in his conversation with Girlfriend in September 2020, the actor revealed that there was a kiss scene between his and Brown’s character, but both of them decided to not do it. He said, “There was actually in the script. Well, not a kiss scene, but like a little kiss on the cheek.”

Partridge then mentioned that the decision to drop the kiss scene was a good call. After that, he talked about his and Brown’s relationship in the movie and said, “I think it’s quite innocent. You know, they don’t have to define sort of where they are, and they just get on well together.”

Brown then jumped on the wagon and added, “I don’t think every relationship needs to end like that. And I think that it was more powerful left unsaid.” In the end, Partridge said that he sees his and Brown’s characters as youngsters who “get on really, really well” and not two youths in love.

Later, in another interview with Miss Vogue, Partridge opened up about his relationship with Brown and said that he really values his friendship with her and her way “of making you feel completely at home.”

Going by all that, it could only be said that Partridge and Brown’s romance rumors were pure speculation only and the two are only good friends. Besides, Brown is presently in a romantic relationship with her longtime boyfriend Jake Bongiovi.