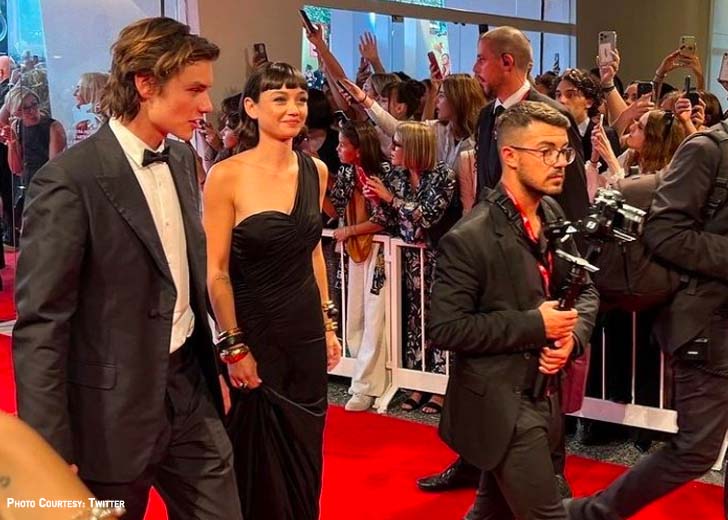 Louis Partridge and Sydney Chandler were said to be dating after falling in love on the Pistol set.

In the May premiere of the Disney+ television series, Partridge, 19, played a youthful Sid Vicious, while Chandler, 24, played Pretenders vocalist Chrissie Hynde.

Partridge flew to Italy this week to accompany Chandler to the Venice Film Festival premiere of her film Don’t Worry Darling.

Let’s look at the two actors’ relationship rumors and details.

Sydney Chandler and Louis Partridge met on the set of ‘Pistol’

While Partridge and Chandler didn’t have many moments together, most of her appearances were split with Toby Wallace, who played Sex Pistols musician Steve Jones. They formed a connection that lasted beyond the film.

After finishing Pistol, the two were said to have spent time together in Los Angeles and London. In December, they also visited the Isle of Wight and Paris. Online sleuths have been deciphering all the hints that Partridge and Chandler are, in fact, dating.

Neither side has verified this, even though they have potentially gone ‘Instagram official’ on several occasions.

According to Daily Mail, they’ve been going out quietly for nearly a year, but they’ve managed to stay under the radar.

There are several reports that the pair have officially announced their dating. However, Daily Mail also mentioned the couple is on the verge of going public with their relationship and has not yet.

In May 2022, a video of Chandler kissing her lover at the Pistols premiere in London went viral. A fan who questioned the lovebirds’ age discrepancy posted the video to TikTok, followed by a lot of criticism.

Comments like, “I’m going to die on this hill,” “18-26? Nope,” “He was a juvenile when she initially met him, and relationships between adults and teenagers are uncommon,” etc. flooded the comment sections.

Their seven-year age difference has sparked widespread outrage for a multitude of reasons. According to a May 2022 Reddit argument, Chandler allegedly sought Partridge from a young age and waited until he was 18 before commencing their relationship.

According to the complaint, the actress convinced him to quit his relationship with his ex-girlfriend.

As per Famous Zoom, the actress allegedly took Partridge on vacation to several undisclosed locales and was rude to his fans.

“30 years old was never so bad-looking. It’s unfortunate that the breakout stars’ friends and family aren’t interested enough to stop it. Even if the subject is of legal age,” the post went on.

Chandler, who has been dubbed a “nepo child” since she is the daughter of Hollywood superstars Kyle and Kathryn Chandler, called names like “Kiddo” and “baby boy” to the young actor.

Reviewers said Chandler was groomed in the conventional manner, which he described as “100% horrible.”

While some criticized and said, “That’s quite disconcerting; I don’t understand how people in their mid- to late-twenties can date literal teenagers,” others agreed that if the gender roles had been reversed and the guy had been older, the age gap would not have been an issue.