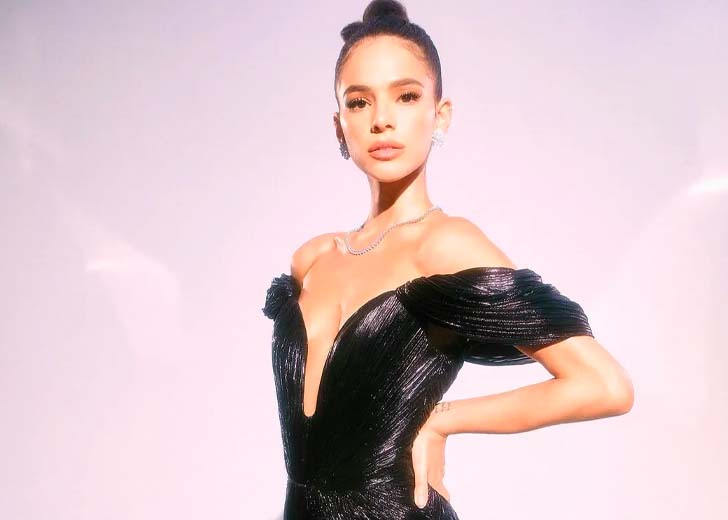 Bruna Marquezine is a talented Brazilian actress who is currently winning the hearts of thousands for her portrayal of the lead character Liz Lobato in the new Netflix series Maldivas — which aired on June 15, 2022.

Starring alongside her in the show are Natalia Klein, Manu Gavassi, and Carol Castro — Klein is also the writer and creator of the show. The mystery-drama show has been viewed by thousands of people worldwide and has received good reviews.

1. Bruna Marquezine is in her mid-20s

Born in 1995, Marquezine is currently 26 years of age and celebrates her birthday every year on August 4. As per her date of birth, her zodiac sign is Leo.

The actress’ full or birth name is Bruna Reis Maia — she later adopted the surname Marquezine as a tribute to her parental grandmother. Speaking of family, her father’s name is Telmo Reis, and her mother’s name is Neide Maia.

Besides her parents, she has a younger sister named Luana Marquezine (b. 2002). The family of four spent most of their time in Duque de Caxias, Rio de Janeiro before moving to Barra da Tijuca, Rio de Janeiro — Bruna was 13 at the time.

Furthermore, the actress was born and raised in Brazil and holds Brazilian nationality. Additionally, it’s said that her ethnicity is Brazilian as well, with some traces of Portuguese and Italian ancestry.

2. Bruna Marquezine has a decent height and weight

Marquezine has maintained her body pretty well as she once did modeling at multiple fashion shows. Talking about her body measurements, it’s reported that the figures are 35-25-36 inches or 89-63.5-91.5 cm.

Marquezine’s present relationship status is unknown due to her privacy. Due to that, it couldn’t be said whether she is secretly dating a boyfriend or is relishing her singlehood. But, one thing is sure; she is yet to share the wedding vows with a husband/spouse.

And although her present love life might be in the dark, her former relationships aren’t. The actress was once in a romantic relationship with the star Brazilian football player Neymar Jr — currently playing for the France club Paris Saint-Germain, aka PSG.

Talking about their relationship, they were reportedly introduced at a carnival in Rio de Janeiro in 2012. They eventually began dating, and in February 2013, Marquezine made her relationship with Neymar public.

However, sometime later, they broke up for a while and rekindled their romance before the 2014 World Cup. But more breakups and patch-ups followed after their first split. For instance, after the 2014 World Cup, they separated and reunited in October 2016.

In June 2017, they parted ways again, and Neymar confirmed the news of their split during a charity event. He told reporters, “I do not like to talk about personal things, but yes, me and Bruna are separated. It’s a decision we have taken.”

“It was a decision of both parties. Bruna is a girl I admire a lot and I hope she is happy, not only professionally but in her personal life,” he added.

On January 1, 2018, Neymar confirmed that he and Marquezine had again rekindled their relationship by posting a picture on Instagram where he was kissing her. “When I saw it, I was already in your arms… love u pretinha,” he captioned the post.

However, the reunion again didn’t last for a long time as they parted ways sometime later. Recently, in June 2022, DailyMail had shared pictures of Neymar spending his holidays with his friends and a girl in Miami — the outlet claimed the girl to be Marquezine.

However, that doesn’t seem to be true, a thing that many users have claimed under the article’s comment section as well. The users claimed that the girl is Neymar’s new girlfriend named Bruna Biancardi, whereas Marquezine is currently in Atlanta filming the upcoming DCEU film Blue Beetle.

Marquezine has been using Instagram – under the username @brunamarquezine – for a long time and has made 3,013 posts as of this writing. And she has amassed a massive fan following of over 43 million.

Furthermore, in October 2020, she opened a self-titled YouTube channel so that she could share the backstage of her future projects among her followers. As of now, she has garnered over 110,000 subscribers and 2 million views. Marquezine doesn’t seem to be using TikTok for now.

5. Bruna Marquezine’s net worth is in the millions

Marquezine has been a part of some hit movies and TV shows, mainly in Brazil. In addition, she has been doing multiple paid promotions with some renowned brands. And her huge social media following ensures that she gets a handsome amount.

Considering all of that, it must be sure that the actress has made a decent net worth. So, how much is Marquezine’s net worth? Celebrity Net Worth reports that Bruna Marquezine has accumulated a net worth of $3 million.