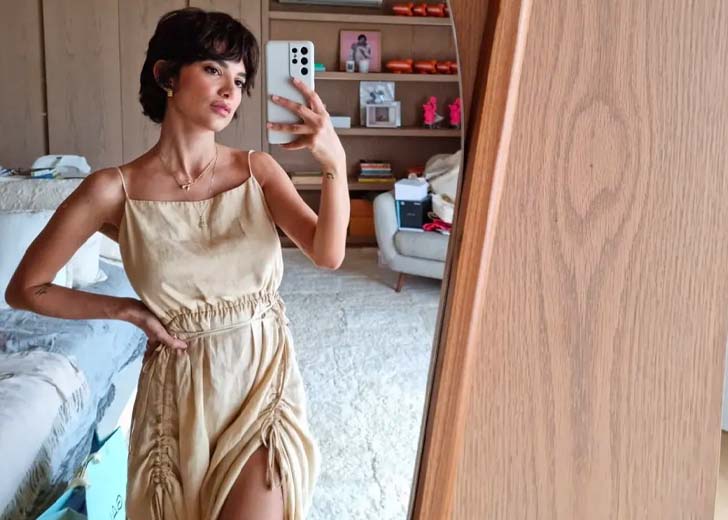 Manu Gavassi is an uprising Brazilian actress who is currently in the spotlight for her performance in the new Netflix series Maldivas — which premiered on June 15, 2022.

In the show, she portrayed the role of Milene Sampaio. Starring alongside her in the show is Bruna Marquezine, Natalia Klein, and Carol Castro — Klein is also the writer and creator of the show.

Similarly, Gavassi’s other acting credits include Helena’s Shadow, Young Hearts, Z4, Socorro, and Virei uma Garota! Furthermore, she was a contestant in the reality show Big Brother Brazil season 20, where she ended up in third place.

1. Manu Gavassi is mainly known as a singer-songwriter

Although Gavassi is gaining the spotlight for her work as an actress at the moment, she initially rose to fame through her musical talents — she later expanded her journey in the acting sector.

She started to make songs at the age of 13. Later on, she began to do some modeling as well as making songs. Initially, she used to create a cover of songs produced by renowned artists such as Taylor Swift and Justin Bieber.

When her father sent some of her music to producer Rick Bonadio, Bonadio decided to sign Gavassi under his label Midas Music, where she recorded her first studio album. Her first self-titled album was then released on August 31, 2010.

Since then, she has never looked back and has continued to grow in the music industry. To date, she has released multiple albums, singles, EPs, and studio albums. Her studio albums include Manu Gavassi (2010), Clichê Adolescente (2013), and Manu (2017).

2. Manu Gavassi has a famed father

Born in 1993, Gavassi is currently 29 years of age. She celebrates her birthday every year on January 4, and her zodiac sign is Capricorn. Additionally, her birth name is Manoela Latini Gavassi Francisco.

Coming over to her family, she is the daughter of José Luiz Francisco, aka Zé Luiz, and Daniela Gavassi. While her father is a well-known broadcaster and presenter, her mother is reportedly a psychologist and plastic artist.

Apart from her parents, she has a younger sister named Catarina Gavassi — who is reportedly a fashion designer. When Manu was 12, she learned how to play guitar from her father, and by the following year, she had already written a song.

When she reached 19, she decided to leave her parents’ house and do something independently. She rented an apartment and started taking interpretation courses in the state capital.

Returning to Manu’s biological parents, they are divorced, and it’s unknown when and why they separated. In 2012, her father shared the wedding vows with a broadcaster named Rafaella Rondelli. It’s unknown what her biological mother is up to.

3. Manu Gavassi has a short height

Gavassi seems to be the shortest among her Maldivas cast members, and she reportedly stands at the height of 5 feet 0¼ inches or 1.53 meters. Similarly, she doesn’t have much weight and weighs around 47 kg or 104 lbs.

Gavassi has been in a romantic relationship with her model boyfriend, Jullio Reis, for a while now. And the couple met each other in one of the unusual ways.

While talking on the Poc Cast podcast in 2022, the actress revealed how she met her boyfriend. Gavassi said that she got to know Reis after one of her friends told her that Reis was the love of her life. And when she started to talk to Reis, she believed it.

She said, “He was completely right because the first time we spoke, we spent seven hours on the cell phone and I didn’t know this person. When I hung up, it felt like it was the person I was most intimate with in my life, someone in my family. It was always dating.”

Gavassi and Reis made things official in early 2021. And since then, they have always been together. The couple’s togetherness could easily be witnessed through their respective Instagram handles, but mostly on Reis’. He could be seen sharing some adorable pictures alongside his girlfriend.

And for Gavassi’s 29th birthday on January 4, 2022, he shared a series of cute pictures and a long but heartfelt caption. As of now, the two have been together for more than a year. And going by their togetherness, it seems like they will be staying together for many more years.

5. Manu Gavassi has a decent net worth

Gavassi’s acting career has been growing swiftly, but her career as a singer-songwriter is already flying high. And considering her works, she must have accumulated a decent net worth as well.

However, the exact figures of her earnings and net worth are yet to be revealed. Nonetheless, multiple media outlets have mentioned that she has an estimated net worth ranging from $3 million to $5 million.