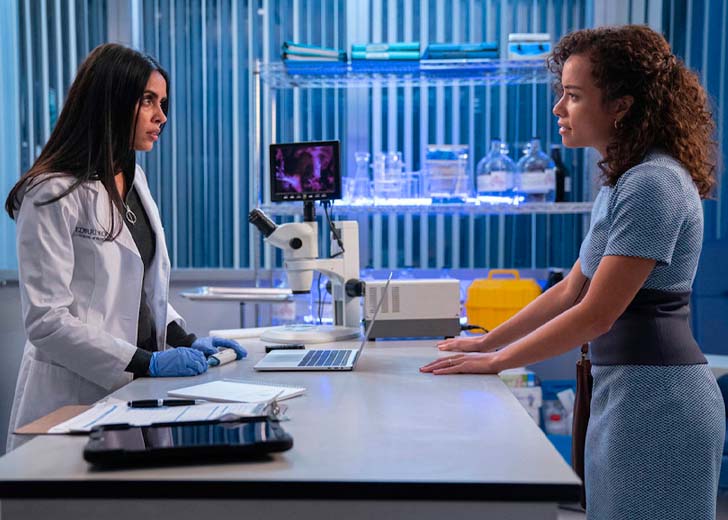 Canadian actress Parveen Kaur is best known for playing the role of Saanvi Bahl in the Netflix series Manifest.

Kaur pursued her acting career in her twenties after dropping out of high school. In 2018, she made her first recurring appearance in Guillermo del Toro’s horror drama series The Strain. Her other films and television shows include White Night, Beyond, and many others.

Later, her breakthrough role came when she was cast as Bahl in Manifest for four seasons (44 episodes) between 2018 and 2022. She played a bisexual character in the show, leading many of her fans to wonder if she is gay or lesbian in real life.

Kaur is not gay in real life. As previously stated, she only played the bisexual character in the Netflix series Manifest.

In the show, fans hoped that she would end up with the protagonist character, Ben Stone.

However, in the 7th episode, Bahl reached out to her ex-partner Alex for assistance with the DNA inconsistencies for her research. Later, it turns out that Alex is her ex-girlfriend, not her ex-boyfriend.

Following the episode, most fans were shocked by the show’s twist. As one fan put it, “Wow, What a great surprise!! We had no idea Saanvi was gay! I love it!! Way to go #Manifest!”

Similarly, LGBTQ+ supporters can’t stop raving about the show’s fantastic twist and wrote, “Thank you for giving us gay Saanvi Bahl. After a season and a half of avoiding pronouns and subtle hints about her queerness, it’s so good to see her ex-girlfriend on screen finally. Thank you for this.”

While many Manifest fans adore the Bahl bisexual character, some expressed a desire to see Bahl’s sexual identity explored more organically rather than as a significant plot twist.

Furthermore, in an interview with Her Campus, Kaur was asked how she felt about receiving the award for creating space for positive representation of diverse women in film and television.

To answer the question, the actress gave the example of working on the Manifest series and stated that her project is personal and she tried to show her upbringing, which may differ from the writers’ room.

Kaur has kept her personal life private and has not revealed anything about her relationship status in her interviews. As a result, fans assumed she was single at the time.

However, based on the actress’s Instagram handle, she does have someone special in her life. She shared a few photos with director and photographer Reza Dahya. On August 22, 2018, Kaur posted a photo of herself at the Toronto International Film Festival and tagged Dahya.

Later, on October 6, 2019, the Manifest actress featured her partner on Instagram for the first time by posting photos of them sitting next to each other and having wine. On the other hand, Dahya frequently shares pictures of Kaur. He last shared a few images from his and Kaur’s vacation in Maui, Hawaii, on May 7, 2022.

Kaur and Dahya appear to have been together for more than nine years. According to Dahya’s Instgaram posts, the couple has enjoyed every moment they spend together.